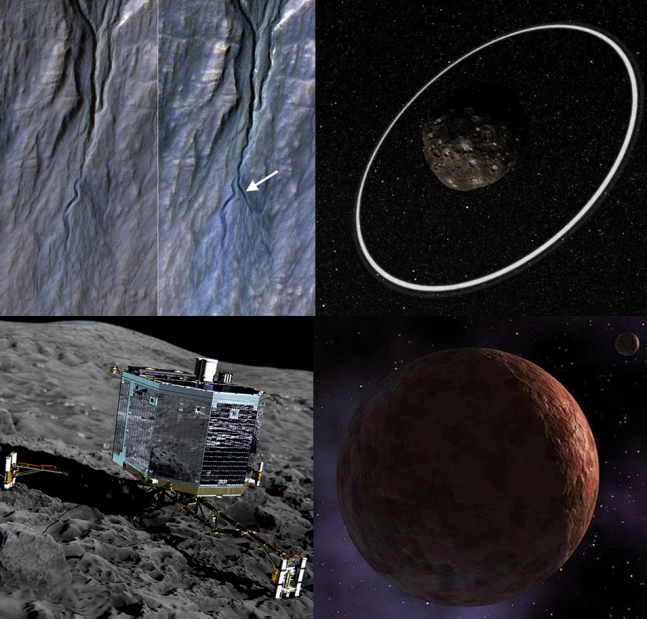 A flurry of discoveries and events have occurred out in our solar system - highlighting how little we actually know about this dynamic environment. Image Credit: Caltech / ESA / ESO / NASA

A ring around an asteroid, a new dwarf planet, a fresh gully on Mars, and preparations to land on a comet – it’s all happening in the solar system at the moment. The last week or two has brought a slew of new discoveries and the promise of many more to come in the very near future.

Interestingly, one of the less-surprising discoveries is that of a distant, but sizeable, object found orbiting our Sun at the very fringes of the solar system. Given the designation 2012 VP113, it’s a miniature world of rock and ice with a layer of carbon dioxide, methane and water. Current estimates place its size at approximately 280 miles (450 kilometers) across. It is located some 80 astronomical units (1 AU equals the average distance between the Earth and the Sun – some 93 million miles) away. That places it at least twice as far off as remote Pluto and exceeds the 76 AU of the previous record-holder, Sedna.

The importance of this announcement of a new dwarf planet is that it doubles the number of known objects at the inner edge of what is known as the Oort Cloud – a vast region that is home to an untold number of frozen cometary nuclei and larger objects, of which 2012 VP113 and Sedna are members. The frozen, sterile little world is about the size of Huya, another Kuiper-Belt world and has been dubbed “VP” or “Biden” in honor of the current U.S. Vice-President – Joe Biden.

The discovery of 2012 VP113 was made by Scott Shepard of the Carnegie Institution for Science in Washington D.C. and his colleagues. Interestingly, they spotted a curious alignment of the orbits of VP113, Sedna, and ten other objects that are closer to the Sun. One possible explanation for this alignment is the gravitational effect of a super-Earth – a planet roughly 10 times as massive as our own, circling 250 AU from the Sun. As more objects in the inner Oort Cloud come to light, as they likely will over the next few years, astronomers will be able to use them as guides to confirm this idea or in the discovery of others that may account for the alignment.

The discovery of “Biden” and its alignment might one day be the bread crumbs which astronomers follow to this mysterious “Planet X.” An artist’s impression of how Chariklo’s rings might look from the surface of the centaur. Image Credit: ESO/L. Calcada/N. Risinger

Also in the news in the past few days was the first sighting of a ring system around an asteroid-like object. Two dark rings have been detected encircling the tiny planetoid named 10199 Chariklo. At 155 miles (250 kilometers) across, this is the largest of the so-called Centaur asteroids — bodies that are comprised of primarily rock and ice which orbit the Sun between Jupiter and the ice-giant Neptune.

Chariklo joins the four gas giants of the solar system in having known rings, though they are tiny compared to the ones girdling the great planets, a mere 4 miles (7 km) and 2 miles (3 km) wide, with a 6 miles (9 km) gap between them, and an orbital radius of about 249 miles (400 km).

Astronomers suspect that the rings formed as a result of debris kicked up when a smaller object slammed into Chariklo in the past.

The discovery was made following observations of the Centaur as it passed in front of a star on June 3 of last year. The so-called occultation had been predicted well in advance and enabled a battery of telescopes to be trained on the event, which lasted for just a few seconds but was long enough to reveal the presence of the asteroid’s rings.

“We weren’t looking for a ring and didn’t think small bodies like Chariklo had them at all, so the discovery — and the amazing amount of detail we saw in the system — came as a complete surprise!” said Felipe Braga-Ribas, the lead author on the paper about the new find. Braga-Ribas went on to add, that Chariklo – may have other surprises in store for observers. “So, as well as the rings, it’s likely that Chariklo has at least one small moon still waiting to be discovered.” This new gully was discovered by comparing images taken of the Martian surface in 2010 and 2013. Image Credit: NASA / JPL / Caltech

Another exciting recent announcement concerns activity on the surface of the Red Planet. By comparing images taken by the High Resolution Imaging Science Experiment (HiRISE) camera on NASA’s Mars Reconnaissance Orbiter (MRO) in November 2010 and May 2013, scientists have uncovered the formation of a new gully on a crater wall in the southern highlands of Mars. Material of some type, most likely carbon dioxide, has clearly tumbled down the slope cutting a new ravine as it flowed.

As if all this were not enough, the European Space Agency’s Rosetta spacecraft is fast closing in on its prime target — Comet  67P/Churyumov-Gerasimenko — around which it is due to enter orbit in August. Ahead of that, mission controllers have just awoken the Philae lander, which is riding piggy-back on the Rosetta spacecraft itself and, in November, will separate itself prior to attempting a soft touchdown on the surface of the  comet’s nucleus.

These deep space events and discoveries suggest that the solar system is a very dynamic place, with objects in it that were not even imagined just a few years earlier. NASA currently has the New Horizons spacecraft just a year away from conducting a flyby of the dwarf planet Pluto. As highlighted above, ESA’s Rosetta mission is about to study a comet in intimate detail and NASA has another spacecraft, the Mars Atmosphere and Volatile Evolution (MAVEN), on its way to study the Martian atmosphere. It is likely that other revelations about just how unique our galactic neighborhood is – are on their way.