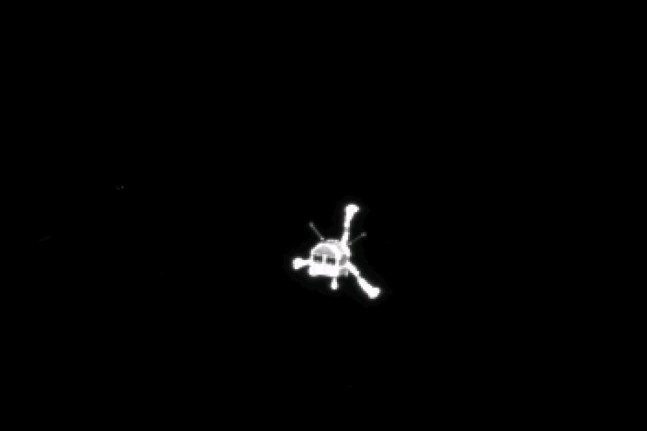 View of the Philae lander on its way to the comet's surface, as seen by Rosetta's OSIRIS camera. Photo Credit: ESA

It had been seven months without any word from the European Space Agency’s Philae lander – until yesterday. ESA scientists, on Saturday, June 13 at 4:28 p.m. EDT (20:28 GMT), received the first signals from the lost spacecraft since it had suddenly went silent three days after touching down on the comet 67P/Churyumov-Gerasimenko on Nov. 12, 2014.

“Philae is doing very well – it has an operating temperature of minus 35 degrees Celsius and has 24 watts of power available,” said Philae Project Manager, Stephan Ulamec. “The lander is ready for operations.”

Philae ‘spoke’ for 85 seconds with its team on Earth, via Rosetta, in its first contact since it went into hibernation. However, when analyzing the data, it became clear that Philae must have been awake earlier than initially thought.

“We have also received historical data – until now, however, the lander had not been able to contact us,” ESA stated on its website.

Nevertheless, before the successful first contact after seven long months of waiting, ESA has been studying high-resolution imagery of the comet’s terrain to locate the lander. Now, the mission scientists think they may have found Philae, resting on a frigid terrain of the comet.

“We have identified several possible lander candidates in OSIRIS images, both inside the CONSERT [COmet Nucleus Sounding Experiment by Radiowave Transmission] region of interest and nearby,” said Holger Sierks, principal investigator of the Optical, Spectroscopic, and Infrared Remote Imaging System (OSIRIS).

The OSIRIS instrument is on board the Rosetta spacecraft that released Philae and orbits the comet, continuously taking images of the frosty leftover of the formation of the Solar System.

Philae’s final landing spot may be far more distant than it was estimated before Rosetta arrived at the comet. During the landing, Philae’s harpoons did not deploy and the lander rebounded for an additional two-hour flight before finally coming to rest at an unknown location. The scientists believe that it has travelled more than a kilometer from its initial contact point.

“Although the pre- and post-landing images were taken at different spatial resolutions, local topographic details match well, except for one bright spot present on post-landing images, which we suggest is a good candidate for the lander,” said Philippe Lamy, member of the OSIRIS team. “This bright spot is visible on two different images taken in December 2014, clearly indicating that it is a real feature on the surface of the comet, not a detector artifact or moving foreground dust speck.”

However, the scientists are not absolutely sure that this bright spot really is Philae. Rosetta’s closer flybys will be used to provide higher-resolution imaging, but due to the recent high cometary activity, when jets of gas and dust could be hazardous for the spacecraft’s navigation systems, the idea has been put on hold.

“It is extremely difficult to locate the lander in the uneven terrain and to know for sure if ‘that is Philae’,” said Ekkehard Kührt, a planetary scientist at DLR (German Aerospace Center ) and a member of the OSIRIS team. “In addition, the Rosetta orbiter has had to increase its distance from the comet for safety reasons, due to the rising activity of the comet.”

‘Before’ and ‘after’ comparison images of a promising lander candidate located near the CONSERT ellipse as seen in images from the OSIRIS Narrow-Angle Camera. Each box covers roughly 20 x 20 m on comet 67P/Churyumov–Gerasimenko. (Click to enlarge) Photo Credit: ESA/Rosetta/MPS for OSIRIS Team MPS/UPD/LAM/IAA/SSO/INTA/UPM/DASP/IDA

Ulamec was hopeful that the lander would finally establish contact with Earth. He almost predicted Philae’s wake up, before the end of hibernation.

“The conditions for Philae’s wake-up are becoming more and more favorable as the comet approaches the Sun,” Ulamec said this week. “The team at DLR’s Lander Control Center has continued to prepare long term operations for Philae and its instruments in the hope that it does wake up soon.”

Now, the scientists are waiting for their next contact. In Philae’s mass memory, there are still more than 8000 data packets, which will give the team information on what happened to Philae in the past few days on the comet.

Rosetta is an ESA mission with contributions from its Member States and NASA. Rosetta’s Philae lander is funded by a consortium headed by DLR, the Max Planck Institute for Solar System Research (MPS), the French Space Agency (CNES), and the Italian Space Agency (ASI).