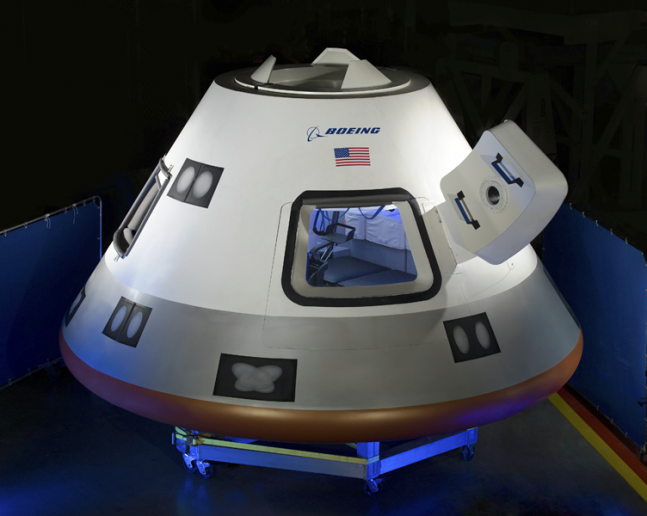 Boeing’s Crew Space Transportation (CST)-100 spacecraft is one of the contenders competing on NASA’s Commercial Crew Program (CCP) and hopes to be selected to help ferry astronauts to and from the International Space Station (ISS). Recently, United Launch Alliance (ULA) successfully completed a Critical Design Review (CDR) of the accommodations at Cape Canaveral’s Space Launch Complex 41 (SLC-41), slated to host CST-100’s future commercial crew launches. SLC-41 will require modifications so as to be cleared to send crews to orbit. With support from Boeing, NASA, and the U.S. Air Force, the CDR team reviewed and approved designs for the Crew Access Tower, Crew Access Arm and the White Room, providing flight crews with the capability to enter and leave the CST-100 crew module safely for launches. The conceptual design of the emergency exit system, similar to the space shuttle basket escape system, was also reviewed.

“This was a critical milestone to ensure all elements are in place to begin the construction as early as this fall to support the Boeing team and crewed launches of CST-100 from SLC-41. As ULA was creating the innovative new design elements for the pad, human safety factors were the primary consideration,” ULA Human Launch Servies director Ellen Plese said.

“We have made great strides with ULA in the development of the CST-100 emergency detection system, the launch vehicle adapter and now the crew access tower. Our focus is on human safety and meeting these goals ahead of schedule puts us in a good position as we look forward to the next phase of the Commercial Crew Program.”

The construction and addition of the new elements will take approximately 18 months to complete and will not affect any of the currently scheduled launches at SLC-41. United Launch Alliance is currently on track to launch some 15 missions this year.

“The beauty of the plan is the integrated fashion in which the construction will be handled. We will be constructing each segment of the new tower and access arm at an off-site location and performing assembly at the pad between launches. This allows ULA to continue its full manifest of launches from SLC-41 while preparing the pad for future commercial crew missions,” described Plese.

Boeing, SpaceX and Sierra Nevada Corporation are hoping to see the first flights of these spacecraft in 2017 – the same year that NASA plans to launch their new heavy-lift booster, the Space Launch System (SLS). As it is currently envisioned, these private companies will handle the responsibility of sending crews to low-Earth-orbit as SLS and the Orion spacecraft focus on missions beyond the orbit of Earth.

ULA is the most experienced and reliable launch service provider in the nation and has over a century of combined heritage, with more than 80 satellites successfully delivered into orbit to date. ULA provides both the military and civilians with essential data to track severe weather, run GPS navigation and ensure troops have critical capabilities necessary for the field.

That’s great, but the Boeing CST-100 could be the greatest spacecraft ever built and it would make absolutely no difference. The decision as to who wins NASA’s Commercial Crew Program has already been made, and we all know who the winner is. The decision had nothing to do with aerospace engineering, and everything to do with who is “The Golden Child” of politics and public perception,

Boeing is just reinventing Apollo era infrastructure. In my opinion, NASA needs a minimum of 2 winners. These 2 winners can alternate being the crew vehicle, while adding 2 or 4 extra flights per year to augment crew to increase research. It would be great if all three were chosen. But, considering the cost of using the Atlas V launch vehicle($200 million/launch at least), NASA will only be able to choose 2 with an annual manned LEO launch budget of $800 million. If spacex gets it’s vehicle working like it said, CST-100 & Dragon V2 will be the vehicles.