Lady astronauts have served as a beacon of inspiration for girls since the flight of Valentina Tereshkova in 1963. Here the first female shuttle astronauts pose during training. Photo Credit: NASA

When I was asked to write about the top female astronauts, I was faced with a daunting task. So many outstanding women have made important contributions to human spaceflight we’ve gained remarkable learning from their efforts. Could I get it down to just  a handful? Researching these wonderful women, I was humbled and awed. I whittled my shortlist down to the following six astronauts, listed in chronological flight order. They came from ordinary backgrounds like you and me, but they knew how to dream big and had the ambition to take it all the way. I’m certain you’ll be inspired by their stories and accomplishments!

Valentina Tereshkova in 1963, preparing to board Vostok 6. Photo Credit: Roscosmos

Dr. Valentina Tereshkova holds the distinction of being the first female to go into space. In the early 1960’s, with the U.S. and Soviet Union racing each other to reach a series of “firsts,” Tereshkova made some landmark accomplishments. At age 26, she was ten years younger than America’s youngest Mercury astronaut. Gordon Cooper. She logged more hours in space during her single flight on Vostok 6 than the combined flights of all the Mercury astronauts, spending almost three days in her capsule, orbiting the Earth 48 times. Her final words prior to liftoff were, “Hey, sky! Take off your hat, I’m coming!”

While in orbit, Tereshokova conducted biomedical & science experiments to learn about the effects of space on the human body, took photographs that helped identify aerosols in the Earth’s atmosphere. and manually piloted the ship. The Soviets’ space missions were timed so closely that Tereshkova’s Vostok 6 capsule and the Vostok 5 actually passed within 3 miles of each other, and she spoke to her fellow cosmonaut, Valery Bykovsky, over the radio during her flight! Tereshkova, whose call sign was “Seagull,” was one of four females selected to the Cosmonaut Corps, and the only one from her group to ever fly in space.

In her daily life she was a textile worker, but she was also an expert parachutist. This was a critical skill for cosmonauts flying those early missions. After re-entry and descent, the only way to get back to Earth was to eject at about 7,000 feet with a parachute because the Vostok capsules could not land safely. After Tereshkova’s successful mission, space travel remained exclusive to males for close to 20 years. In 1982, cosmonaut Svetlana Savitskaya, traveled to the Salyut 7 space station where she became the first woman to perform a space walk. Sally Ride, the first female American astronaut, followed with her space debut a year later.

After her flight on Vostok 6, Valentina Tershkova studied at the Zhukovsky Air Force Academy, graduating with distinction as a Cosmonaut engineer. She pursued her education further, and went on to earn a Doctorate in Engineering. Dr. Tereshkova rose to prominence as a politician, and remains politically active today.

At age 76, on the 50th anniversary of her flight in Vostok 6, she once again displayed her pioneering spirit by raising her hand to take a one-way flight to her favorite planet, Mars. “Of course, it’s a dream to go to Mars and find out whether there was life there or not,” Tereshkova said. “If there was, then why did it die out? What sort of catastrophe happened?” Given the opportunity, I have no doubt this amazing woman will help us find out!

Dr. Sally Ride was the celebrated first American woman and youngest American astronaut to travel into space. She served as CapCom (capsule communicator) for the second and third-ever Shuttle flights, and helped to develop the Space Shuttle’s robotic arm. Ride flew two space missions (STS-7 and STS-61), both aboard Challenger, serving in the capacity of Mission Specialist.

The purpose of these missions was to deploy satellites and perform pharmaceutical experiments.  Ride was the first person to use the robotic arm to retrieve a satellite, and the first woman to use the arm in space. Ride spent several years working at NASA headquarters where she founded NASA’s Office of Exploration. She also served on the Presidential Commissions that investigated both the Challenger and Columbia disasters. 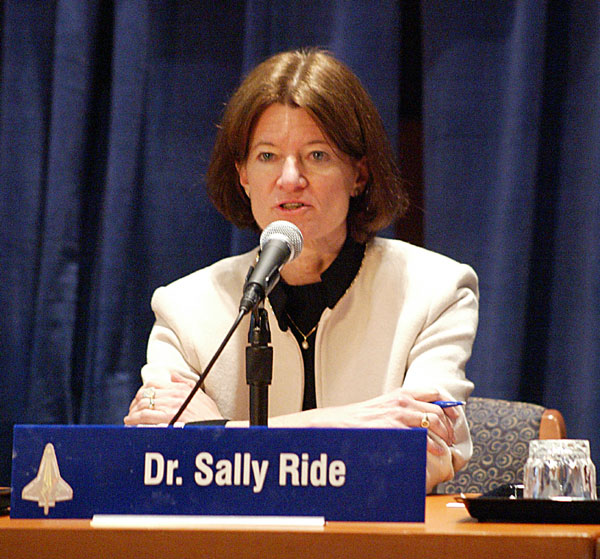 She wrote or co-wrote seven books on space aimed at children, with the goal of encouraging children to study science. She became a Physics professor and Director of the California Space Institute, and also led public outreach programs through NASA.

The ISS EarthKAM and the GRAIL MoonKAM were made accessible to middle school children, allowing them to request photos of the moon and the Earth. Dr. Ride also created a company called “Sally Ride Science, “ which focuses on creating entertaining science programs with an emphasis on STEM learning for girls. Sally Ride lost her battle with pancreatic cancer in 2012 at age 61, leaving an amazing legacy of inspiration. 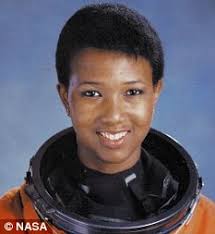 Dr. Mae Jemison drew her spacefaring inspiration from Sally Ride and Nichelle Nichols, the actress who played Lieutenant Uhura in the original Star Trek series. After serving as a physician in the Peace Corps, Jemison applied to the Astronaut Corps. Her acceptance to the astronaut training program was delayed due to the Challenger disaster, but Jemison was finally selected and joined NASA in 1987.

On Sept. 12, 1992, Dr. Jemison became the first African American woman in space on Space Shuttle Endeavour’s second flight, which carried her and six other astronauts into space for eight days. She served as Mission Specialist and worked on the bone cell research experiment flown on STS-37, a cooperative mission between the United States and Japan.

Jemison and LeVar Burton in Engineering on STTNG

Jemison left NASA in March 1993 and went on to teach at Dartmouth College. She also founded her own company, the Jemison Group, working on sustainable energy development projects and satellite-based telecommunications to facilitate health care delivery in West Africa. Dr. Jemison is a strong advocate for science, establishing an international science camp for high school students and working on the 100-Year Starship program. As if all of these accomplishments were not enough, Dr. Jemison realized one other very special dream when she appeared as a guest on Star Trek: The Next Generation. 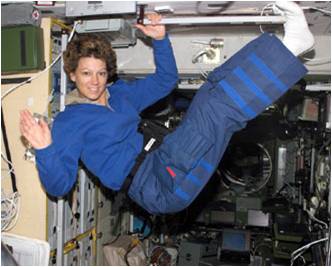 Like Valentina Tereshkova and Sally Ride, Eileen Collins has become a pioneer in the world of aviation. She is a former U.S. Air Force Colonel and test pilot, and made her mark as the first woman to have ever piloted a Space Shuttle, and the first woman to command a Space Shuttle mission. Piloting Discovery in 1995, Collins served as second in command for the United States’ historic rendezvous with the Mir space station. After taking time away to have her daughter, she returned to space in 1997, piloting a second trip to Mir aboard Atlantis.

Her next mission was aboard Columbia, where she served as commander to the crew that deployed the Chandra X-Ray telescope. Col. Collins’ final flight. STS-114, took place aboard Discovery in 2005, when Collins commanded NASA’s “return to flight” mission to test safety improvements and resupply the International Space Station.

On this mission, Collins became the first astronaut to fly the Space Shuttle through 360-degree pitch maneuver, which enabled astronauts aboard the ISS to take photographs of the Shuttle’s underside. This was necessary to ensure there was no threat. Collins holds degrees in Math, Science, and Space Systems Management. After her retirement from NASA in 2006, she made occasional public appearances as an analyst covering Shuttle launches and landings for CNN. Dr. Kalpana Chawla was the first Indian-born woman, and second person from India to travel into space. She earned Engineering and Aerospace Engineering degrees in India before settling in the U.S., where she continued her studies. She earned her PhD in Aerospace Engineering, and began her work for NASA at the Ames Research Center in 1988. She was selected for the Astronaut Corps in 1994 and took her first flight (STS-87) aboard Columbia.

During that mission she deployed the Spartan Satellite, which malfunctioned due to a software problem and necessitated a 2-man spacewalk to retrieve it. After STS-87. Chawla worked at NASA on technical projects for the Space Station, and was selected to fly again as a Mission Specialist for STS-107. Although the 2002 mission was ultimately scrapped after repeated delays and technical problems, STS-107 eventually got off the ground aboard Space Shuttle Columbia in 2003.

Columbia carried a SPACEHAB module to the ISS, where Chawla and her fellow astronauts performed more than 80 experiments on microgravity, atmospheric dust, and astronaut safety. The ill-fate mission was a success, but disaster struck during re-entry, when the orbiter’s wing overheated and came apart, leading to complete destruction of the vehicle. The damage to the wing occurred upon liftoff, when a piece of foam damaged heat-resistant tiles which are critical to the integrity of the Shuttle’s structure during re-entry. All of the crew members were lost as the world watched, helplessly. After her death, Dr. Chawla was awarded the following distinctions: Congressional Space Medal of Honor, NASA Space Flight Medal, and NASA Distinguished Service Medal.

Barbara Morgan began her space career as an Elementary School science teacher from Idaho. She was selected for the “Teacher in Space” program as backup to Christy McAuliffe, and the two trained together before McAuliffe’s ill-fated mission aboard Challenger in 1986, where all of the crew lost their lives shortly after liftoff. The “Teacher in Space” program was cancelled after the Challenger disaster, but Morgan decided to press on, pursuing her dream of space. Her famous quote during that time was, “I want to get some stardust on me.”

She continued teaching science, and also worked with NASA’s education division. She was a major contributor to science education, and served on the National Science Foundation’s Federal Task Force for Women and Minorities in Science and Engineering. In 1998, Morgan was chosen by NASA to become a mission specialist, and underwent training at Johnson Space Center. She worked there as CapCom, and also earned an amateur radio license, qualifying her to conduct radio communications with students on Earth as part of the ARISS (Amateur Radio on the International Space Station) program.

Morgan pictured at the time of her 2007 flight aboard Endeavor

She was scheduled to be on a Columbia flight – the next mission after the disaster occurred. After the tragic loss of the Columbia crew, it took another four years before Morgan actually went into space.

In 2007, she lifted off on Endeavor as Mission Specialist for the STS-118 crew. During the 13-day mission, Morgan was in charge of all payload and operated a robotic arm to transfer a platform to the International Space Station. She also answered questions from students via satellite, something McAuliffe had also hoped to do. Now retired from NASA, Morgan remains a dedicated educator and works for Boise State University promoting STEM education. Morgan stated, “Yes, actually I did get some stardust on me. We all got some stardust on us.”

There can be little doubt that the female space travelers here, as well as their sisters, serve a crucial role in inspiring young women to seek out careers in STEM-related fields. It is hoped that those who follow in the footsteps remember who inspired them – and serve to carry on the tradition.

This article was originally written as a blog post for The Scientista Foundation, a partner of The Spaceflight Group.