The “Best Christmas ever” onboard the Space Station 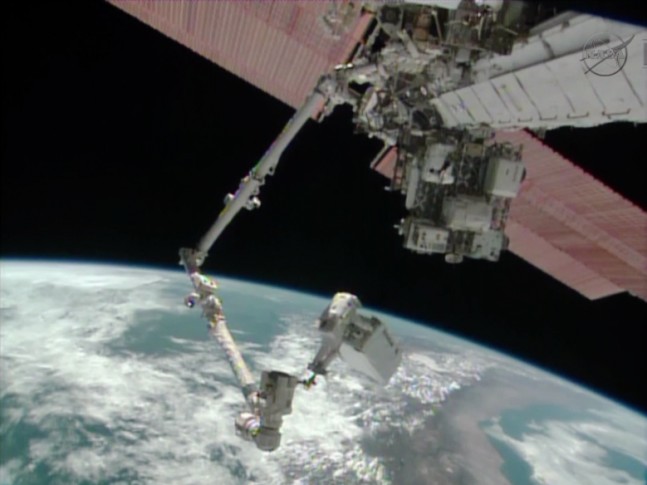 NASA astronauts Rick Mastracchio and Mike Hopkins completed their second spacewalk yesterday, Dec. 24, 2013 – in a successful attempt to repair the malfunctioning coolant Loop A onboard the International Space Station (ISS). The rare Christmas Eve Extra-Vehicular Activity (EVA), only the second in history, negated the need for yet another history-making EVA on Christmas Day to be conducted in support of a pump that broke Dec. 11. The positive results of both spacewalks, the first and second for Hopkins and seventh and eighth for Mastracchio, were in large part a testament to NASA’s contingency planning and proof that nothing is easy in space.

The first spacewalk, conducted on Saturday, Dec. 21, ended an hour early as a consequence of a number of factors, including possible temperature issues with Flight Engineer Mastracchio’s suit. During repressurization on Saturday a small amount of water entered that same suit’s coolant system, prompting the astronauts to reconfigure a backup suit and postponing the planned EVA an additional day. Mastracchio’s spacesuit will return to use again when it dries out.

Once out of the Quest airlock the replacement operation went smoothly, for the most part. NASA relayed that Hopkins rode the robotic Canadarm2, operated by Japanese Aerospace Exploration Agency (JAXA) astronaut Wakata, to the worksite. He carried with him the 780-pound pump module. Mastracchio tethered himself to the station and moved to the worksite to assist Hopkins. While disconnecting one of four fluid lines the astronauts reported seeing flakes of ammonia escape, an issue not uncommon with past coolant pump replacement EVAs. The disabled pump will be stored on-orbit, bolted to the Space Station’s Mobile Base System, where NASA calculates it can safely remain until next June at the earliest. All four fluid lines were safely attached to the new pump and all electrical connections restored. This resolved the need for a possible third EVA. While NASA has said Loop-A has been mended, the space agency plans on conducting further tests before restoring full functionality.

Once back in the airlock Mastracchio and Hopkins followed the established NASA protocol to “burn off” any clinging ammonia contamination before continuing through the ISS to rejoin the awaiting Expedition 38 crew.

The spacewalk officially ended at 2:23 p.m. EST, lasting seven hours and thirty minutes and totaling just shy of 13 hours for both EVAs. To date 176 spacewalks have been conducted in support of the ISS’ construction and maintenance.

USA Today reports that Mastracchio signaled the successful completion of the mission, radioing, “Houston, you got yourself a new pump module. Congratulations.”

Houston commemorated the event by responding, “It’s the best Christmas ever. Thanks, guys.”