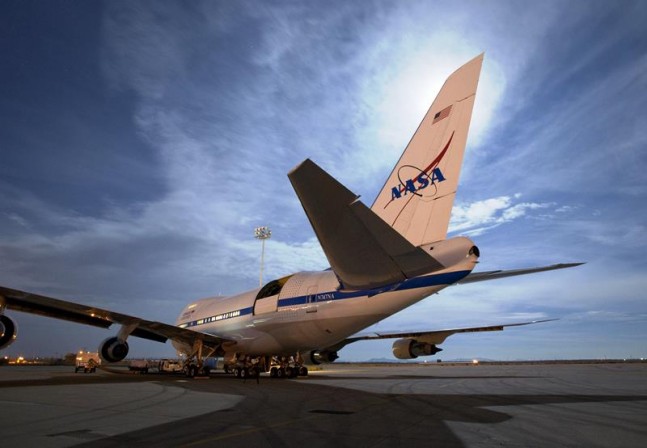 NASA’s Stratospheric Observatory for Infrared Astronomy (SOFIA) is getting outfitted with a new instrument which is set to provide astronomers and scientists with observations only possible from the sky. The high-resolution, mid-infrared spectrograph, called the Echelon-Cross-Echelle Spectrograph (EXES), began testing on the nights of April 7 and 9, according to Matthew Richter, leader of the team that is developing the instrument at the University of California, Davis, Physics Department.

Separating wavelengths of light to a precision of one part in 100,000, EXES’ 130 mirrors will be splitting light from SOFIA’s telescope into a rainbow of infrared light. The core is made up an echelon grating, which is a 3-foot (1 meter) bar of aluminum, providing a unique angle to space observations made within earth’s atmosphere.

“The combination of EXES’s high spectral resolution and SOFIA’s access to infrared radiation from space provides an unprecedented ability to study celestial objects at wavelengths unavailable from ground-based telescopes,” said Pamela Marcum, a program scientist at the SOFIA Science Center and Program Office in Moffett Field, California. “EXES on SOFIA will provide data that cannot be obtained by any other astronomical facility on the ground or in space, including all past, present or those observatories now under development.” The heavily modified Boeing 747 is a joint venture between NASA and the German Aerospace Center (DLR) and has the perfect advantage over both land and space based telescopes such as the Hubble and Spitzer. SOFIA’s international reach allows it to observe different parts of the night sky while being able to rotate our instruments and equipment. Flying between 39,000 and 45,000 feet (12-14 kilometers), the airborne telescope has the advantage, being above 99% of the water vapor in the atmosphere that distorts telescope imagery, NASA reported.

Even though the EXES instrument has only flown aboard the aircraft twice thus far, its observations seem to provide a glimpse into the lasting value of having the spectrograph on board.

According to NASA, on its maiden flight aboard SOFIA on April 7, EXES observed emissions from Jupiter’s atmosphere in two molecular hydrogen lines. On its second flight, the spectrograph observed a massive young star within the constellation Cygnus, still embedded din its natal cocoon. Dubbed AFGL 2591, the star was easily seen by EXES due to an infrared background glow which was caused by the star warming the surrounding dust. The SOFIA Science Center stated that: Many objects in space emit almost all their energy at infrared wavelengths. Often, they are invisible when observed in ordinary visible light. In other cases, clouds of gas and dust in space block the light emitted by more distant objects, but allow infrared energy to reach our telescopes. In both cases, the only way to learn about other objects is to study the infrared light they emit.

Presently in development are the seven first light instruments, five US-made and two German. The instruments — cameras, spectrometers, and photometer — operate in the near-, mid- and far-infrared wavelengths, some better suited to studying a particular phenomena, while others are general purpose but capable of acquiring data simultaneously with another instrument.

SOFIA was poised to be cancelled under the White House’s FY 2015 Budget Proposal. Many of NASA’s planetary and science initiatives have seen their budgets cut in the past half decade.

“Of the observations obtained during the instrument’s first flights, only one can be done from the ground, albeit with some difficulty, and the others are impossible from even the best ground-based telescope sites because the water in Earth’s atmosphere is opaque at these wavelengths,” Richter said. “While space observatories are above Earth’s atmosphere, the massive optical equipment required to separate the light as finely as EXES does – EXES weighs almost 1,000 pounds – would be a challenge to launch into space. In these observations, the spectral features we are studying are narrow, and finely dividing the infrared spectrum to detect them is exactly what EXES was designed to do.”