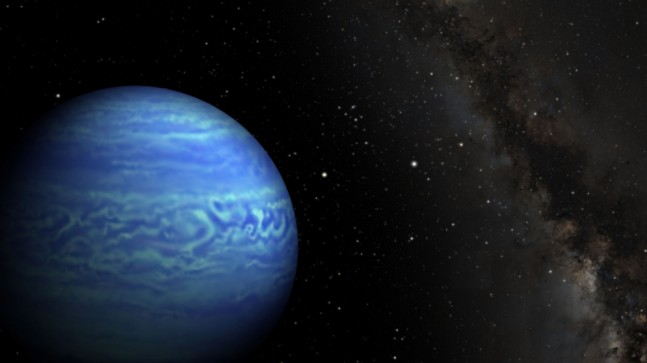 This image is an artist's rendition of the chilly brown dwarf star WISE J085510.83-071442.5. You can see our Sun just to the right of it appearing as a bright star. Image Credit: Penn State University/NASA/JPL-Caltech

NASA’s Wide-field Infrared Survey Explorer (WISE) teamed up with the Spitzer Space Telescope to make a very “cool” discovery – a stellar version of our North Pole.  The frigid new star, classified as a brown dwarf, is the fourth closest star system to the Sun at a distance of approximately 7.2 light-years away. Our Sun’s nearest neighboring system is the triple star system of Alpha Centauri, at a distance of only 4 light-years away.

“It’s very exciting to discover a new neighbor of our solar system that is so close,” said Kevin Luhman, an astronomer at Pennsylvania State University’s Center for Exoplanets and Habitable Worlds, University Park. “And given its extreme temperature, it should tell us a lot about the atmospheres of planets, which often have similarly cold temperatures.”

Brown dwarfs are essentially failed stars, lacking the mass to ignite nuclear fusion and radiate starlight. Nuclear fusion, the conversion of Hydrogen to Helium in a star’s core, is what fuels a star and makes it shine. The first brown dwarf star wasn’t discovered until 1995 and currently astronomers hypothesize our universe could contain as many brown dwarfs as traditional stars.

Brown dwarfs are very cool and dim and therefore most go unobserved, that’s where WISE and Spitzer come in. There faint signatures are unable to be seen in visible light but do shine in the infrared portion of the spectrum. The new brown dwarf, dubbed WISE J085510.83-071442.5, has a record-setting frigid temperature of minus 54 and 9 degrees Fahrenheit (minus 48 to minus 13 degrees Celsius). To put that into perspective, previous brown dwarf discoveries were right around room temperature. Illustration depicting the solar neighborhood. In this image you can see where the newest discovery is in relation to the Alpha Centauri system. Image Credit: Penn State University

WISE surveyed the areas around our Sun two and three times and noticed a rare, fast-moving object in the data. After taking a closer look, astronomers realized exactly what they had discovered. This rapid motion told them two things: the celestial body in question was close and was really something special.

“This object appeared to move really fast in the WISE data,” said Luhman. “That told us it was something special.”

The apparent rapid motion (illustrated here) of WISE J085510.83-071442.5 triggered Luhman to observe it using the Spitzer Space Telescope, and by doing so he was able to determine its temperature. By using the two telescopes in combination, Luhman was also able to measure exactly how far away WISE J085510.83-071442.5 was. The method used is called the parallax effect and is essentially the same effect we see by holding an object in front of our face and seeing it move when you cover your left eye and then your right.

“It is remarkable that even after many decades of studying the sky, we still do not have a complete inventory of the sun’s nearest neighbors,” said Michael Werner, the project scientist for Spitzer at NASA’s Jet Propulsion Laboratory in Pasadena, Calif. JPL manages and operates Spitzer. “This exciting new result demonstrates the power of exploring the universe using new tools, such as the infrared eyes of WISE and Spitzer.”

WISE J085510.83-071442.5 is estimated to have a mass of three to ten times the mass of Jupiter. Since brown dwarfs are so common, Luhman and his team believe this to in fact be a brown dwarf and not a gas giant who was ejected from its star system. If this is confirmed to be a brown dwarf, it will be one of the least massive ever observed.

WISE was constructed by the Ball Aerospace & Technologies Corp of Boulder, CO. and is managed by NASA’s Jet Propulsion Laboratory in Pasadena, CA.

The Spitzer Space Telescope is also managed by NASA’s Jet Propulsion Laboratory in Pasadena, CA and was named for American theoretical physicist Lyman Spitzer who first conceived the idea of telescopes operating in space.