Supermassive black hole spins more than half of light’s speed 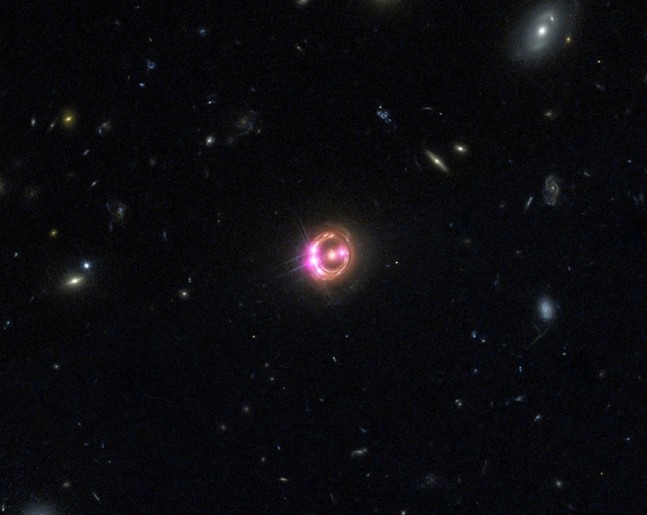 Astronomers have measured the rotational speed of a distant black hole for the first time thanks to the combined efforts of two orbiting X-ray telescopes, NASA’s Chandra X-ray Observatory and the European Space Agency’s (ESA’s) XMM-Newton, aided by the unique alignment with a large elliptical galaxy providing a visual boost.

This supermassive black hole, known as RX J1131, was observed interacting with surrounding gas, other matter that creates a brilliantly luminous quasar. Matter that comes into contact with this supermassive black hole is heated to millions of degrees, as it forms an accretion disk due to the orbital movement around the black hole’s singularity, and produces observable X-rays that were used to calculate its rotation.

RX J1131 is around six billion light-years away, so our view of it is from six billion years in the past. This was a time in the universe’s history when black holes were more active because of an abundant supply of near-by stars and matter to fuel their growth creating an active galactic nuclei (AGN). A large elliptical galaxy that actually blocks our direct line of sight to this black hole enhanced this recent observation. It produces a bending known as “gravitational lensing’ in X-ray spectrum of light emitted by the quasar, and enhances the magnification of the space-based observatories allowing them to peer at great distances with enhanced detail.

“Because of this gravitational lens, we were able to get very detailed information on the X-ray spectrum – that is, the amount of X-rays seen at different energies – from RX J1131,” said astronomer Mark Reynolds, in a paper he co-authored that was published in the journal Nature this Wednesday. “This in turn allowed us to get a very accurate value for how fast the black hole is spinning.”

Astronomers found that the rotational speed of the accretion disc around RX J1131 is spinning at over half the speed of light. Matter can orbit a spinning black hole much closer than one that is more stationary, and detecting such a fast rotation shows that the black hole was formed through a rabid phase of collisions and mergers with great amounts of matter as fuel.

“We estimate that the X-rays are coming from a region in the disk located only about three times the radius of the event horizon, the point of no return for infalling matter,” said Jon M. Mille, another author on the paper. “The black hole must be spinning extremely rapidly to allow a disk to survive at such a small radius.” Though the rotational speed of supermassive black holes has been calculated before, the X-ray rotational speed was only observable with some deal of certainty in relatively close black holes, like the supermassive black hole located 60 million light-years away in the center of the Great Barred Spiral Galaxy (NGC 1365). Before this recent finding, the most distant spin estimates were taken from black holes located between 2.5 billion and 4.7 billion light-years away.

Most astronomers are confident that our own Milky Way galaxy has a supermassive black hole in its center, but have been unable to detail much about its size or rotational speed due to its lack of direct interaction with surrounding matter. This is expected to change sometime before spring of this year, as a gas cloud three times the size of Earth called G2, continues on a steady collision course with the center of the Milky Way known as Sagittarius A*.

Studying the behavior of supermassive black holes near and far, will help astronomers and astrophysicist better understand the life and death cycles of these elusive dark devourers.