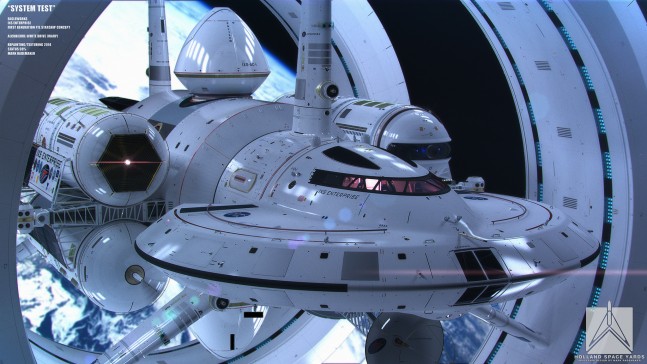 Space Exploration Technologies just unveiled its new Dragon V2 crew-rated spacecraft, which was a big “wow” moment for a lot of people. But if these newly released conceptions are any idea, NASA may be planning on trying to upstage that, big time. The dreams of a Star Trek-like Enterprise starship which could travel to the stars have come to life on the drawing board of Dr. Harold “Sonny” White, who is the Advanced Propulsion Theme Lead for the NASA Engineering Directorate. He wants to bring a real warp-drive-enabled starship to life, and the new 3-D concept illustrations are amazing, as just published on Sploid. The 3-D illustrations are designed to inspire; the artist, Mark Rademaker, said that “he worked with White to create the updated model, which includes a sleek ship nestled at the center of two enormous rings, which create the warp bubble.”

The renderings are an update to the earlier concept, which was based heavily on the original “Star Trek look.” While the two huge outer rings are new, the main spacecraft itself, which sits inside them, is definitely inspired by the original Enterprise. They are meant to convey a more realistic depiction of what this kind of spacecraft may actually look like.

The “warp drive,” which would be needed for this kind of interstellar vessel, is a controversial concept, given that it would be designed to allow a spacecraft to, in a way, travel faster than the speed of light.

Such an endeavour may seem like the stuff of science fiction and nothing more, but Dr. White and his colleagues would disagree with that sentiment. In their opinion, it is not only doable, but perhaps even achievable in the not-too-distant future.

White has developed the new, theoretical work necessary to solve the problems with the Alcubierre Drive concept, a theory that states that faster-than-light travel could actually be possible, based on Einstein’s field equations in general relativity.

The solution is a kind of work-around; while our current knowledge of physics still maintains that nothing can travel faster than light, the warp drive would “cheat” that barrier by creating a bubble in the space-time fabric and bending space around the craft, which would essentially make the distances between far-flung points in the galaxy shorter. So it wouldn’t really break the speed-of-light barrier, but it would seem like it did.

According to Dr. White, “by harnessing the physics of cosmic inflation, future spaceships crafted to satisfy the laws of these mathematical equations may actually be able to get somewhere unthinkably fast – and without adverse effects.” Diagram of a “warp bubble” generated by the spacecraft, distorting the space-time fabric around it. Image Credit: Mark Rademaker

While the work involved is of course still preliminary, it has already advanced past simply being theoretical. From the Sploid article:

“Working at NASA Eagleworks – a skunkworks operation deep at NASA’s Johnson Space Center – Dr. White’s team is trying to find proof of those loopholes. They have “initiated an interferometer test bed that will try to generate and detect a microscopic instance of a little warp bubble” using an instrument called the White-Juday Warp Field Interferometer.”

According to Dr. White, such a spaceship should be able to get to Alpha Centauri, the nearest star system to Earth, in about two weeks Earth-time, with the same amount of time passing inside the craft as well. It could also reach Gliese 581g, an “Earth-like” exoplanet 20 light-years away, in only two years.

Dr. White sums up his work in that context:

“Perhaps a Star Trek experience within our lifetime is not such a remote possibility.”

All of the illustrations, and video of a presentation at the SpaceVision 2013 conference, can be seen here. See also this overview on io9 and this earlier article on Gizmodo.