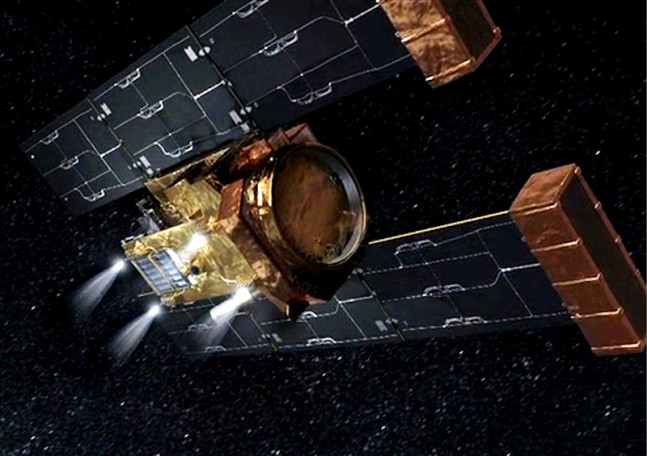 Scientists have made new discoveries regarding the early solar system thanks to samples returned by NASA's Stardust spacecraft. Image Credit: NASA

Since its return to Earth in 2006, scientists have been studying the payload of NASA’s Stardust spacecraft. The spacecraft ventured out into the solar system to collect and return samples from comets for further analysis. Among the samples collected, seven rare, microscopic interstellar dust particles are thought to have been detected. These dust particles date back to the beginnings of our solar system, and if confirmed, would be the first samples of contemporary interstellar dust. This particular sample was returned to Earth in 2006, and scientists have spent the past eight years carefully going through the craft’s aerogel and aluminum foil dust collectors. The seven particles in question are predicted to originate from outside of the solar system, maybe even in a supernova explosion and could have been altered due to the extreme environment of outer space.

“These are the most challenging objects we will ever have in the lab for study, and it is a triumph that we have made as much progress in their analysis as we have,” said Michael Zolensky, curator of the Stardust laboratory at NASA’s Johnson Space Center in Houston and coauthor of the Science paper.

Stardust launched in 1999, and subsequently returned to Earth after completing a seven year mission. After landing at the Utah Test and Training Range, the Stardust Sample Return Canister was then delivered to a facility at Johnson Space Center, where it remains preserved for future analysis.

The Sample Return Canister contains a collector tray, shaped like a tennis racket, and as the spacecraft flew within close proximity to a comet in 2004, particles were captured in a silica aerogel. Interstellar dust samples were also collected during the spacecraft’s sever-year, three billion mile journey through the solar system. Scientists were surprised to find the particles were more diverse in composition and structure than first predicted. Different sized particles having varying differences and histories. The majority of the larger particles were said to have fluffy structures, much like snowflakes. More testing is required before scientists can definitely say if these particles come from interstellar space or not. If they do, they can tell us about the origin and how interstellar dust evolves.

Thanks to a group of citizen scientists, dubbed the “Dusters”, two particles about two microns (thousandths of a millimeter) in diameter were separated after their tracks were discovered. The Dusters are a volunteer group of citizen scientists from the University of California Berkley, who have scanned over a million images searching for these types of particles. A third track, left by a fast moving particle, was discovered. The particle was moving so quickly, approximately 10 miles per second (15 kilometers per second), that it vaporized. Volunteers have also identified tracks from 29 additional particles. The largest interstellar dust track found in the Stardust aerogel collectors was this 35 micron-long hole produced by a 3 picogram speck of dust (circled in red). It was probably traveling so fast that it vaporized upon impact. Image Credit: UC Berkeley / Andrew Westphal

Four of the particles in question were discovered between the collector tray tiles, in the aluminum foils. The foils were not originally designed to be dust receptacles; however, they have already produced four potential candidates for interstellar dust particles. Three of the four are only a few tenths of a micron in diameter and contain sulfuric compounds. Many astronomers argue that these types of compounds are not in interstellar dust. Further foil analysis is needed to help identify enough particles to  fully understand the origins and types of interstellar dust.

Supernovae, the violent deaths of evolved stars, are believed to be responsible for seeding the cosmos with elements, especially heavier elements such as carbon, nitrogen, and oxygen — the building blocks of life. Two of the particles on Stardust’s Aerojet collectors, named Orion and Hylabrook, will be studied in greater detail in order to determine their oxygen isotope quantities, further indicating a potential extrasolar origin.

Johnson scientists have currently scanned half of Stardust’s collection panel at various depths. The scans were converted into video format and posted online for the Dusters to examine. Once the Dusters have tagged a track, Andrew Westphal, the lead author of this study, and his team work to verify the identifications. One million frames have been scanned so far, each measuring a half-millimeter square. In these squares, the Dusters have identified 69 tracks, with Westphal verifying two. Thirty-one of the tracks were extracted and sent to UC Berkley for further analysis.