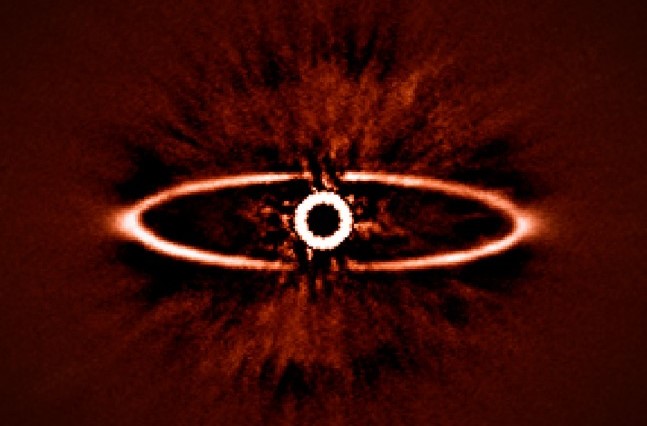 Infrared image taken by SPHERE of a circumstellar dust ring around the star HR 4796A. The light from the star itself in the centre of the image has been blocked out. Image Credit: ESO

Taking actual photographs of distant planets orbiting other stars is no easy task, and even in the best ones obtained so far, the planets still only look like tiny points of light. A new advancement in this area though promises to improve our view of these worlds.

The Spectro-Polarimetric High-contrast Exoplanet REsearch instrument (SPHERE) has now been installed on ESO’s Very Large Telescope (VLT) at the Paranal Observatory in Chile. SPHERE is a very complex instrument that utilizes various techniques at the same time to obtain images of exoplanets and circumstellar disks, where planets are forming. It has just seen first light for the first time, and has already taken some images of some dusty circumstellar disks. Advanced adaptive optics, special detectors and coronagraph components give SPHERE the power to take better exoplanet images than was possible before.

SPHERE was installed in May of 2014 after passing acceptance tests in December of last year. It is part of the second generation of instruments for the VLT, after X-shooter, KMOS and MUSE. A birds-eye view of the Very Large Telescope in Chile. Photo Credit: ESO

The technology involved is much more advanced than in previous imaging instruments such as NACO, which took the first-ever direct image of an exoplanet. As Jean-Luc Beuzit of the Institut de Planétologie et d’Astrophysique de Grenoble, France, explained:

“SPHERE is a very complex instrument. Thanks to the hard work of the many people who were involved in its design, construction and installation it has already exceeded our expectations. Wonderful!” Beuzit serves as the Principal Investigator of SPHERE.

As its name implies, SPHERE is a highly specialized instrument designed specifically for the study of exoplanets. It will focus on gas giant type planets orbiting nearby stars, since those are the easiest to take images of. Even then, it is a daunting task; even larger worlds like those are still much fainter points of light compared to their host stars.

There are three main techniques involved in SPHERE’s imaging operations. The first, extreme adaptive optics, compensates for effects of the Earth’s atmosphere which can cause images to be fuzzier. For something like exoplanets, images of course need to be as sharp as possible. The second uses a coronagraph to mask the star itself, blocking the light and increasing the contrast in the image to help bring out faint details like planets. The third technique is called differential imaging which exploits the differences between planetary and stellar light in terms of its color or polarization. This can also help planets become more visible in the images. The combination of all of these techniques in one instrument brings a much-needed advancement to the field of exoplanet studies.

As Beuzit noted, “This is just the beginning. SPHERE is a uniquely powerful tool and will doubtless reveal many exciting surprises in the years to come.”

While indirect analysis and study is of course important, being able to actually see them could allow scientists seeking out these distant worlds a far better understanding of their attributes.