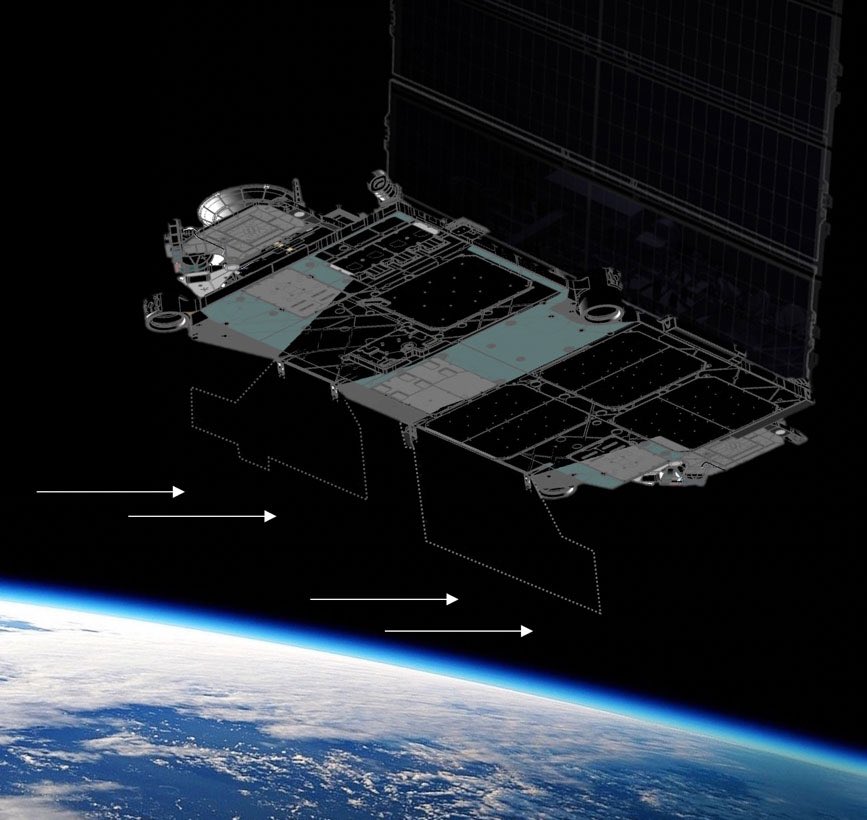 An illustration of how radio transparent material will be used to act as a sunshade on an upcoming “VisorSat” Starlink satellite. Credit: SpaceX

SpaceX will test sun visors on one of their Starlink satellites on their next launch, currently planned for early June.

SpaceX CEO Elon Musk announced his plan to combat the reflectivity of the companies Starlink satellites in a new program called “VisorSat.” The program comes as a result of criticism from astronomers regarding the satellites brightness in the night sky.

At a briefing for an astrophysics decadal survey, Musk revealed two plans, VisorSat and a method of orientation for the satellites, stating “Our Objectives generally, are to make the satellites invisible to the naked eye within a week, and to minimalism the impact on astronomy, especially so that we do not saturate observatory detectors and inhibit discoveries.”

The Starlink system has received considerable criticism from astronomers and astrophysicists alike, who have been worried about the effects of the planned constellation of up to 40,000 satellites, citing concerns of interference with wide field telescopes. Elsewhere many have criticized the program for the massive increase in space pollution, citing concerns about space debris and overcrowding, even the inability to see the unobstructed night sky.

However SpaceX has actively been searching for a solution for decreasing brightness. In the launch that took place in January, an experimentally coated satellite was included in the grouping. Dubbed “DarkSat” the satellite used what SpaceX described as experimental darkening materials coating the reflective surfaces of the satellite, in an effort to reduce reflectivity and visibility from the ground. Ultimately while the coating did reduce brightness, SpaceX decided that the VisorSat method would be more successful in reaching the end goal. Musk stated “We found an option that is even better than that, which is to basically give the satellite shades.”

While the brightness has become a distraction for those concerned, for many others it has become an incredible spectacle of high popularity that many have viewed and photographed. In the immediate aftermath of the launch, the high reflectivity results in a long train of satellites traveling in the same direction, something never seen before. There are even websites and apps dedicated to locating these satellites for viewing. The launches are frequent at about 1 per month, with 60 satellites per launch. In just the 7 launches that have occurred thus far, SpaceX has become the worlds largest satellite operator.

SpaceX is planning to test the VisorSat system on the next Starlink launch, currently scheduled for early June.