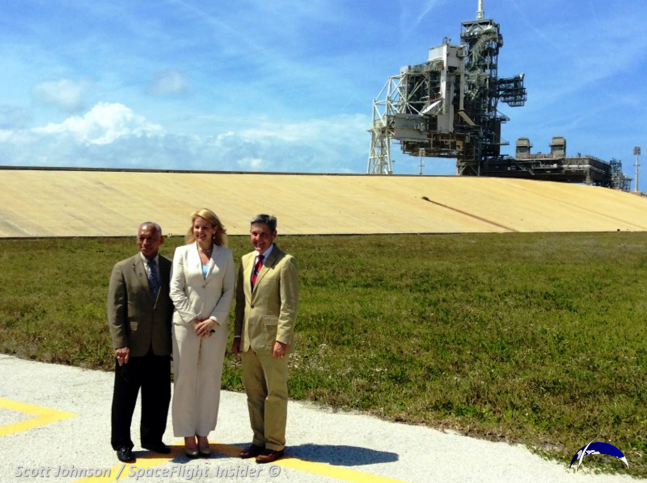 From left-to-right: NASA Administrator Charles Bolden, SpaceX COO and President Gwynne Shotwell and NASA Kennedy Space Center Director Robert Cabana. The trio held an event at KSC's Launch Complex 39A to detail how SpaceX would take control of the historic location for use on the company's Falcon 9 Heavy rocket and that it would launch in the first quarter of next year. Photo Credit: Scott Johnson / SpaceFlight Insider

KENNEDY SPACE CENTER, Fla. – On Monday, April 14, Space Exploration Technologies Corporation (SpaceX) signed a 20 year lease agreement with NASA for the use of its Pad “A” located at Kennedy Space Center’s (KSC) Launch Complex 39 (LC-39A),  the pad from which all Apollo Moon landing missions, and many space shuttle  missions, departed the planet.

“As the world’s fastest growing launch services provider, SpaceX will maximize the use of pad 39A both to the benefit of the commercial launch industry as well as the American taxpayer,” Shotwell said. NASA is preparing the nearby “twin” Pad 39B for use by its new heavy-lift launch vehicle, the Space Launch System (SLS).  However, the agency had no planned  use for LC 39A and has actively sought a commercial partner to develop,  maintain and use the pad. SpaceX announced its intention to take over the pad and the event was signed this past week.

At the event, Bolden commended Cabana for transitioning KSC into a “21st  century launch complex” and “opening up a new sector in the economy and creating  jobs.”

SpaceX’s role is much broader than it might appear. As mentioned, the location is where the missions to land crews on the Moon started. It is a historic site, one which must be maintained.

Cabana, who followed Bolden, stated that even though he appreciated the history of  Pad 39A, he would “rather be making history, than studying history,” and that the  signing of the SpaceX lease was an “important step” in that direction.

“Kennedy Space Center is excited to welcome SpaceX to our growing list of partners,” Center Director Bob Cabana said. “As we continue to reconfigure and repurpose these tremendous facilities, it is gratifying to see our plan for a multi-user spaceport shared by government and commercial partners coming to fruition.”

Shotwell’s statement is noteworthy in that SpaceX has previously indicated that the first flight of its Falcon 9 Heavy vehicle would take place from Vandenberg Air Force Base in California. Her statement is apparently the first  public suggestion from the company that it intends to do otherwise.

When asked what modifications SpaceX intended to make to the pad, Shotwell stated that most historic elements would remain but the company did intend to  make some modifications, including building a “launch head / crown” and  installing new instrumentation and plumbing. She also indicated that a new  hangar would be built “not far” from the pad.

“It’s exciting that this storied NASA launch pad is opening a new chapter for space exploration and the commercial aerospace industry,” said NASA Administrator Charles Bolden. “While SpaceX will use pad 39A at Kennedy, about a mile away on pad 39B, we’re preparing for our deep space missions to an asteroid and eventually Mars. The parallel pads at Kennedy perfectly exemplify NASA’s parallel path for human spaceflight exploration — U.S. commercial companies providing access to low-Earth orbit and NASA deep space exploration missions at the same time.”

There has been some interest in actually having the Falcon 9 Heavy be used to fly missions instead of SLS. Therefore, having these two systems operating essentially side-by-side – could provide a unique vantage point from which to determine which of the two is capable of launching more quickly, failure rates, comparative cost and other aspects of performance.