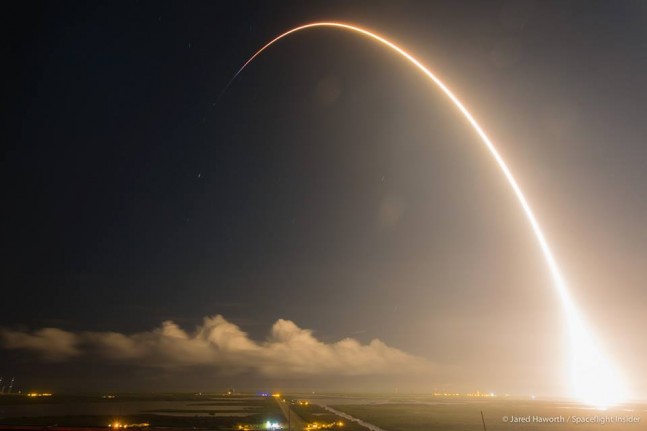 A SpaceX Falcon 9 rocket lifts off from SLC-40 in the early morning hours on September 21. Photo Credit: Jared Haworth/Spaceflight Insider

CAPE CANAVERAL, Fla. — After rain showers delayed the launch of a Space Exploration Technologies (SpaceX) Falcon 9 rocket 24 hours, its Dragon cargo capsule is now on its way to rendezvous with the International Space Station (ISS). This marks the second Falcon 9 launch within two weeks and is SpaceX’s fourth commercial resupply mission, carrying 20 “mousetronauts”, a 3D printer, and more. Dragon is set to rendezvous with the space station on September 23 at 7:04 a.m.. EDT (1104 GMT).

Falcon roared to life, lifting off of Cape Canaveral’s Space Launch Complex 40 (SLC-40) at 1:52:03 a.m. (0552:03 GMT). The local weather delayed the first launch attempt, however, early Sunday morning, the clouds dissipated, and at T-13 minutes, a final flight readiness poll was conducted and the official “GO” was given for launch. Three seconds prior to liftoff, the nine Merlin 1D engines, arranged in the Octaweb configuration, came to life. Between then and T-0, the flight computer assured all systems were nominal before the Falcon 9 v1.1 thundered into the sky above. Roughly one minute and 10 seconds into the flight, Falcon reached supersonic speeds. 13 seconds later, the rocket was travelling through an area called of maximum dynamic pressure or “max-Q”. This region is where the rocket experiences the great amount of pressure due to Falcon’s speed and atmospheric pressures.

At the 2.5-minute mark, the first stage engines are shut down, this is known as main engine cutoff or “MECO”. During this point in the flight, Falcon was travelling at speeds around ten times the speed of sound (Mach 10) and at an altitude of approximately 50 miles (80 kilometers). Following MECO, the first stage separated and eventually splashed down into the Atlantic.

SpaceX aims to make its Falcon’s reusable, eventually landing the first stage on solid ground, where it can be recovered, refurbished and reflown on a subsequent mission. The previous commercial resupply mission (CRS-3) saw the addition of landing legs on the Falcon. This mission was lacking the landing legs, and it was predicted to be a low probability of a successful water landing. Moreover, the company’s rate of launch continues to accelerate. SpaceX’s Hans Koenigsmann stated in the post-launch press conference, that it could launch one of the firm’s F9’s about once every two weeks. Falcon’s second stage then activated its single Merlin vacuum engine, commencing a six minute burn, placing Dragon into low-Earth orbit. Dragon separated from the Falcon 9’s second stage approximately 10 minutes and 15 seconds after launch, and its solar arrays were deployed a few minutes later. SpaceX representatives said Dragon is in good shape, and was set to commence a series of burns over the next two days in order to be in good shape for Tuesday’s planned rendezvous with the orbiting laboratory.

In a post-launch press conference, Hans Koenigsmann, SpaceX vice president of mission assurance said, “It was fantastic. We worked very hard yesterday, and the weather did not cooperate, but today everything was beautiful. There is nothing like a good launch.”

Dragon is carrying over 5,100 pounds (2,313 kg) of supplies, experiments, and provisions to the International Space Station. European Space Agency (ESA ) astronaut Alexander Gerst will employ the station’s Canadian-built robotic arm, Canadarm2, to grapple Dragon, after it completes a laser-guided approach on Tuesday morning. Dragon will then be berthed to the station’s Harmony module.

The Dragon cargo includes a 3D printer, a rodent habitat containing 20 mice as part of an experiment to determine how microgravity affects bone loss and muscle atrophy, and a NASA instrument designed to measure the planet’s ocean winds. Astronauts will unpack the mice and install the ISS RapidScat almost immediately, and then take the next month to unpack the rest of the cargo and reload the Dragon with materials and research to return to Earth next month.

According to NASA, the twenty mice are all female and half will be used to test animal handling procedures in orbit and the other half will be part of a study to help pharmaceutical companies develop muscle atrophy treatments. Half of the group will return to Earth next month, and the other half will return in December. Fruit flies also launched as part of additional studies to better determine how microgravity affects cell growth. As part of a partnership with NASA, Made in Space saw the first 3D printer launched aboard Dragon, and it will be installed on station and tested to see how it performs in microgravity. If this technology is viable, ground crews will be able to email files of tools, and other materials for astronauts to print in space. This technology is vital for the progress of the human journey to Mars.

NASA’s 3D printer project manager, Niki Werkheiser, said “From day one, the supply chain has been limited. We have to launch everything we ever need from Earth, so being able to make what you need on orbit, when you need it, is a real game changer.”

Soon after Dragon arrives at the station, the Dextre robotic arm will remove the RapidScat instrument and install it outside of the station, on ESA’s Columbus module. ISS-RapidScat is designed to measure the world’s ocean winds and will be important in predicting the strengthening of hurricane winds speeds and other weather conditions.

Among the other cargo being delivered to the space station is an experiment by CobraGolf, to test the effects of microgravity on materials and adhesion, IMAX cameras, and two batteries for U.S. spacesuits. The batteries will be installed ahead of the two planned October spacewalks.

Sunday’s launch was the fourth resupply mission to the ISS. NASA currently has a $1.6 billion deal with SpaceX, covering 12 cargo missions through the end of 2016. NASA also has a partnership with Orbital Sciences Corporation, with a Cygnus spacecraft set to launch next month and another Dragon slated for December. Hans beams as he discusses the mission prior to launch. Photo Credit: Mike Seeley/Spaceflight Insider

NASA’s deputy space station program manager, Dan Hartman discussed the dual company partnership during a press conference and had this to say, “We’ve worked out a lot of bugs in the system, both on our side and on the vehicle processing, and both companies are learning along the way. We’re trying to keep our payload throughput up so we can support this increased cadence, but I think we’re well on our way. We’re looking forward to it quite honestly because stable access and stable return of our research is key.”

The Dragon capsule differs from Cygnus in that Dragon is capable of returning to Earth, bringing with it research specimens and hardware. Cygnus is designed to carry waste products and burns up upon re-entry. After remaining on station for approximately a month, this Dragon will “spread its wings” and return to Earth in mid-October, splashing down in the Pacific Ocean, and carrying with it nearly 4,000 pounds of cargo.

Congratulations. It is really good to know that we are slowly but surely making progress for developing technologies needed for undertaking humans journey to Mars and beyond. Many of us in late stage of life may not live to see this happen in our lifetime but our next generation will surely see it happen. That will be a great achievement for mankind. Wish all scientists involved in this mission more such successes.

Hey Brij, I like your outlook on the current space program. I agree it seems much better/brighter today than ever before with commercial working alongside NASA. The old companies seem to want to take advantage of the tax payers dollars, but today they are in a competitive situation to work together.

This is a brilliant move by NASA, well done to them. With this refreshed system I hope they get the money they deserve.

I have voted Republican in the past and did not vote for Obama, but I give Obama much credit for getting this right.

Obama hasn’t done anything for spaceflight. He put Bolden in charge to slow walk the manned space flight program. And that includes SLS and CCC. Oh yah, NASA made a big to do over these commercial crew contracts, but they were awarded with no funding. So what’s going to happen now. The Dems will come back and blame congress for not funding these programs when they knew from the gitgo that funding was not likely. These programs will be delayed and pushed to the right and nothing is going to change until Obama, Bolden and Nelson are gone from office. All they do is talk, talk, talk, with no action, Even the GAO report pretty much indicated that.
Don’t get me wrong, I’m all for manned space flight, just tired of being jerked around by this current administration.