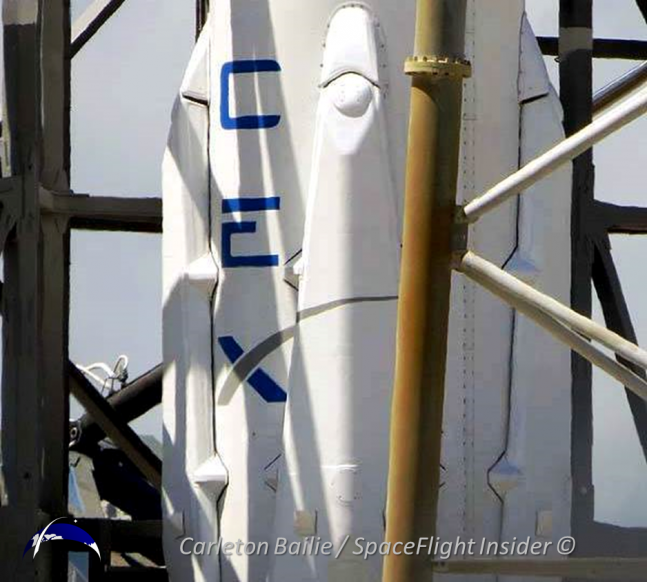 SpaceX President spoke with journalists today during a ribbon-cutting ceremony at NASA's Stennis Space Center in Mississippi. During which, some more details about the recent attempt to recover the Falcon 9's first stage came out. Photo Credit: Carleton Bailie / SpaceFlight Insider

Space Exploration Technologies’ (SpaceX) President and Chief Executive Officer Gwynne Shotwell answered the question that is on many a space enthusiasts minds this week – what happened in terms of the company’s efforts to recover the first stage of the Falcon 9 v1.1 booster that launched on Friday April 18 at 3:25 p.m. EDT (1925 GMT). The third operational flight conducted under the $1.6 billion Commercial Resupply Services contract SpaceX has with NASA was nearly eclipsed by the company’s attempt to have the first stage conduct a watery landing on the Atlantic Ocean. SpaceX has made steady progress in upgrading the company’s Falcon 9 rocket. This includes not just increased capabilities and performance – but having the launch vehicle become partially reusable. Photo Credit: SpaceX

Shotwell: “So we had extraordinary results from the recovery effort, or I should say the re-usability effort on Friday. We did bring the first stage back from its suborbital trajectory. It did land softly, near zero velocity – and then it hit very rough seas – while we were going out trying to recover it. So we are not likely, I don’t believe we are going to recover the stage – but we do have the data that we had a near zero (velocity) landing – which is really a great step forward. Actually, not just for SpaceX and the recovery feats that we are trying to accomplish but to help us learn more about our systems. It’s always better to bring the system back after you used it and examine it to make it safer and more reliable. But actually, that demonstrated that we can do this work and in partnership with the raptor testing that we are going to be doing here – maybe that thirteen-to-fifteen timeline to Mars can be shortened a bit.”

Johnson: Have you found it yet?

Johnson: Can you tell us what you found?

Shotwell: Not at this time, I haven’t seen all the photos. We’ve seen parts (laughs)!”

Johnson: Is there going to be video or photos released?

Shotwell: “I think we have some video. We didn’t have any real-time telemetry and video, so I haven’t seen it yet, I haven’t been back in the office.”

Stay tuned to SpaceFlight Insider for more details from the April 21 ribbon-cutting ceremony as well as exclusive information from the SpaceX-3 mission.