SpaceX F9R explodes in the skies above Texas during test flight 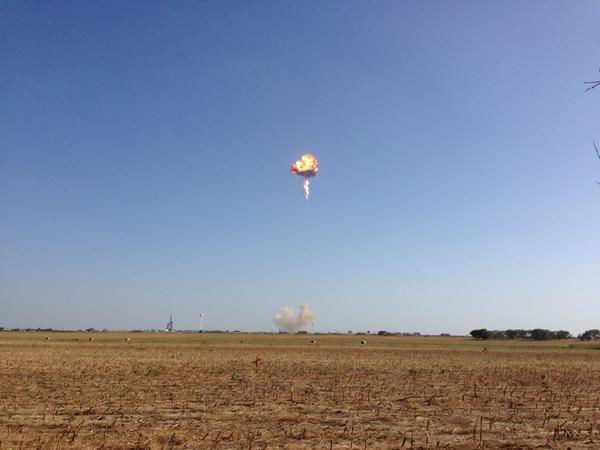 Image of the explosion of the Falcon 9 Reusable test article on Aug. 22, 2014. Photo Credit: Amanda Spence

A report appearing on Business Insider has detailed how one of Space Exploration Technologies (SpaceX ) Falcon 9 Reusable (F9R) test articles has exploded in the skies above MacGregor Texas. The accident occurred on Aug. 22, 2014. Although unfortunate, the loss of the test article can be viewed as a validation of SpaceX’s safety systems. Local television KXXV-TV’s Bruce Gietzen stated that there were no injuries – despite reports of debris raining down after the rocket had its flight terminated.

Flight termination hardware is part of all major launch vehicles’ systems. Most launch sites are in rural areas and are far removed from populated areas. However, given the fact that these boosters can cover vast distances in fairly short order – each has systems on board that will destroy the rocket before accidentally crashing into towns or cities. This system was activated today and destroyed the F9R before it caused any damage or injuries.

The Hawthorne, California-based company began developing methods to have a rocket’s first stage return back to the launch site via the firm’s “Grasshopper” test article. As with most everything that SpaceX does, rapid systems development is routine. As such, the company moved onto testing a version of the rocket’s first stage with Vertical Takeoff Vertical Landing (VTVL) systems incorporated into it.

Sometime during today’s flight, the F9R’s systems detected an anomaly, one which was severe enough to warrant the activation of the flight termination systems. Video appearing on WFAA Channel 8 show what appears to be a normal flight, quickly followed by a expanding fireball with a trail of smoke falling back to Earth.

SpaceX’s John Taylor issued a statement to Business Insider saying the following: “Today’s test was particularly complex, pushing the limits of the vehicle further than any previous test. As is our practice, the company will be reviewing the flight record details to learn more about the performance of the vehicle prior to our next test.”

Amanda Spence, who captured the featured image above, tweeted that grass fires were started from the debris that reached the ground. According to a report appearing on SpaceFlight Now, firefighters were called on the scene to put out the flames.

As noted, the F9R is a highly-modified version of the Falcon 9’s first stage. Flight engineers launch the system from a concrete pad at MacGregor. The F9R test article uses three, rather than the normal nine Merlin 1D engines to carry out its flights. The booster has been sent aloft up to altitudes of 3,280 feet (1,000 meters) in prior test flights.

SpaceX’s MacGregor Facility encompasses some 900 acres and is where SpaceX tests the stages of the Falcon 9 v1.1 which the company uses to carry out missions under the $1.6 billion NASA Commercial Resupply Services contract as well as commercial satellite missions. It is also the site where the Dragon cargo vessel is serviced and where the company conducts its VTVL test flights.

Soft-landing rocket stages has been done before by NASA (DC-XA ) as well as by private space firm Blue Origin (New Shepard ). However, SpaceX is the first company to test out the technology on an actual mission. To date, SpaceX has carried out tests of the system during the April 2014 CRS-3 mission and again three months later during the July Orbcomm OG2 launch.

Looks to me like the guidance system malfunctioned. Of course it is just an observation. Maybe there was a missing algorithm in the computer program.

Looks like SpaceX might have been trying to see how far off upright it was possible to lean the vehicle while simultaneously climbing and translating sideways without also going beyond the limits of the vehicle’s attitude control authority to recover to an upright orientation. Could be they got their answer even if in a more dramatic way than intended.

This rocket is called; Falcon 9 Reusable (F9R), that’s funny, I don’t think the title fits, nothing reusable on that rocket.

I, too, wouldn’t imagine there’s very much reusable from the vehicle in its current condition. But prior to SpaceX’s little oopsy moment the entire vehicle had been used and reused several times on prior test flights; as had the Grasshopper before it for that matter. The Dragonfly, when it is up and running, will, likewise, be reused in some indeterminate number of test flights as will this unfortunate late vehicle’s sibling when it reaches Spaceport America in New Mexico soon.

I gather you bear no love for SpaceX. Based on my experience posting comments on many space blogs, you have plenty of company. But you do your dubious cause no credit when you say things that are obviously false. Do you grant even plausibility – never mind truth – any weight at all when composing your little attempts at SpaceX-bashing? I’m curious.

I never said anything false about spacex, wouldn’t think of it. I just seems odd how spacex lovers attack anyone who says anything they perceive as negative towards the company, but don’t hesitate to criticize other aerospace companies over the smallest flaw. Spacex is not all what you think, I have relative’s, friends and colleagues who work at spacex and the stories I hear from them alarm me and many others. They are far from accountability of taking on Human space flight and can’t imagine NASA allowing it. Flying satellites or cargo is a whole different ballpark and I don’t believe their work culture is suited for that. I do hope they succeed for the sake of jobs on the space coast. Thankfully this website practices our freedom of speech, so many other space flight forums edit out anything negative about space x even if it’s the truth.

Tom,
dick is all about the “x” and replies to everybody. don’t sweat it.

glad i’m not the only one to notice spacex has all of these folks screaming at folks on chat boards. you don’t see that from orbital, sierra Nevada or blue origin fans. at some point you have to ask why is that?