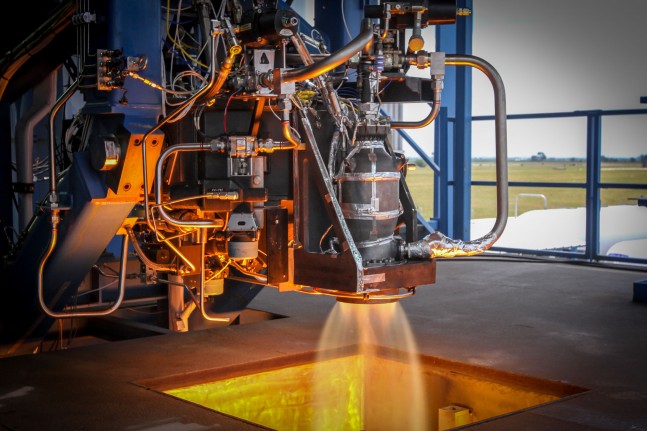 SpaceX announced on Tuesday that it has completed qualification testing for its SuperDraco thruster which will power the Dragon spacecraft’s launch escape system and enable the vehicle to land propulsively on Earth or another planet with pinpoint accuracy.

The tests were conducted last month at SpaceX’s Rocket Development Facility in McGregor, Texas.  The engine was tested under a variety of conditions including multiple starts, extended firing durations, and extreme off-nominal temperatures and propellant flow.

The SuperDraco is an advanced version of the Draco thrusters currently used by the cargo version of SpaceX’s Dragon spacecraft to maneuver in orbit and during re-entry.  The crewed version of the Dragon will use SuperDracos as part of the spacecraft’s launch escape system and also for propulsive landing on land. The SuperDraco can produce 16,000 pounds of thrust and can be restarted multiple times. The engine also has the ability to deep throttle, giving astronauts precise control and enormous power.

The SuperDraco’s engine chamber is manufactured using a state of the art form of 3-D printing known as direct metal laser sintering (DMLS). The chamber is regeneratively cooled and printed in Inconel, a high-performance superalloy that possesses both high strength and toughness for increased reliability.

“Through 3-D printing, robust and high-performing engine parts can be created at a fraction of the cost and time of traditional manufacturing methods,” said Elon Musk, Chief Designer and CEO. “SpaceX is pushing the boundaries of what additive manufacturing can do in the 21st century, ultimately making our vehicles more efficient, reliable and robust than ever before.”

Unlike most launch escape systems which are jettisoned a few minutes after launch, the SpaceX launch escape system is integrated into the Dragon spacecraft. The eight SuperDraco thrusters built into the sidewalls of the Dragon can produce up to 120,000 pounds of axial thrust to carry astronauts to safety in the event of an emergency during launch.  The integrated escape system can carry the astronaut to safety at any point during the ascent trajectory, not just during the first few minutes.  The eight SuperDracos also provide redundancy, even if one engine fails an escape con still be successfully performed.

The first flight demonstration of the SuperDraco engines will occur during an upcoming pad abort test for NASA’s Commercial Crew Integrated Capabilities initiative (CCiCap). The pad abort test is expected to take place later this year and will be the first test of SpaceX’s new launch escape system.

SpaceX also announced that they will unveil the Dragon V2 , the crewed version of the Dragon Spacecraft, on Thursday, May 29. The event will take place at the company’s headquarters in Hawthorne, California and will be live- streamed beginning at 7:00 p.m. PT. The Dragon V2 will be capable of carrying a mix of cargo and up to seven astronauts to the ISS.  Elon Musk posted on twitter that the unveil would reveal “Actual flight design hardware of crew Dragon, not a mockup.” In the future, the Dragon spacecraft will use the SuperDraco thrusters to land propulsively on land with pinpoint accuracy. Image Credit: SpaceX