Our Spaceflight Heritage: Our Eyes are Opened 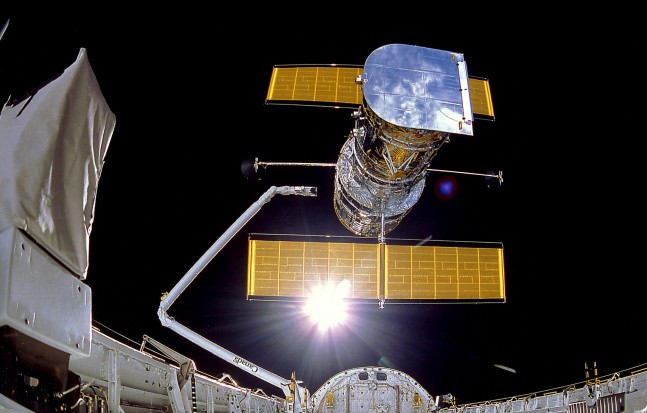 On this day in 1990, The Hubble Space Telescope was deployed by the crew of STS-31.

Launched from complex 39B as space shuttle Discovery’s tenth mission was led by Commander Loren J. Shriver and pilot Charles F. Bolden, Jr, who is currently NASA’s Administrator. Discovery soared to 600 km, which is the highest shuttle altitude to date. The record height permitted the crew to photograph earth’s large scale geographic features not apparent from lower orbits. As Discovery’s primary payload, Hubble was successfully deployed in a 380-statute-mile orbit.

The mission had a slight bump in the road when one of Hubble’s solar arrays stopped as it expanded. While ground controllers searched for a way to solve the problem, with the help of mission specialist Steven A. Hawley, the other two mission specialists Kathryn D. Sullivan and Bruce McCandless II prepared for a spacewalk. The array eventually came free while the mission specialists were pre-breathing inside the partially depressurized airlock.

The rest of the mission was devoted to photography and on-board experiments. The IMAX Cargo Bay Camera (ICBC)  documented operations outside the crew cabin and hand-held IMAX camera for use inside crew cabin. The Ascent Particle Monitor (APM) was used to detect particulate matter in the payload bay. A Protein Crystal Growth (PCG) was used to provide data on growing protein crystals in microgravity. The Radiation Monitoring Equipment III (RME III) measured gamma ray levels in crew cabin. An Investigations into Polymer Membrane Processing (IPMP) was used to determine porosity control in microgravity environment. A Shuttle Student Involvement Program (SSIP) experiment also was used to understand the effects of near-weightlessness on electrical arcs.

Hubble has provided 24 years of deep space photographs in near-infrared, ultra-violet, and visible wavelengths. helping scientists understand more about our universe through its lens.