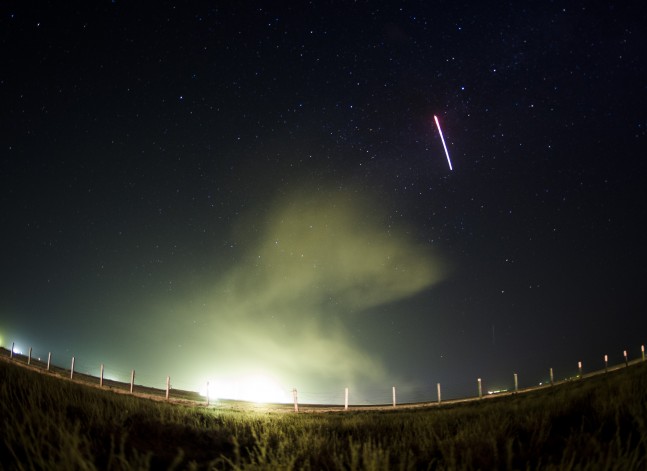 At 3:57 p.m. (19:57 GMT), the Soyuz TMA-13M spacecraft lifted off from the Baikonur Cosmodrome in Kazakhstan atop a Soyuz-FG rocket, carrying three new crew members to the International Space Station (ISS). After a flawless launch, NASA astronaut Ried Wiseman, European Space Agency astronaut Alexander Gerst and Russian cosmonaut Maxim Suraev are right on track to dock with the station in approximately six hours. Today’s launch is a rapid launch with a six hour launch-to-docking time, a procedure first carried out by the crew of Soyuz TMA-08M. The ability to go from Earth to the ISS in a single day is highly advantageous. This well rehearsed procedure is beneficial to the crew as the the first few hours in space can be uncomfortable and stressful until the body adjusts to weightlessness.

A quick rendezvous such as this requires incredibly accurate orbital adjustments from the ISS as well as exact orbital insertion by the Soyuz-FG booster. It wasn’t until last year that studies indicated this degree of accuracy from both the Soyuz-FG booster and the Soyuz TMA-M series spacecraft was possible. After a successful launch and orbital insertion, the Soyuz TMA-13M will undergo the first of two engine burns during its preliminary orbit of the Earth; the instructions for this burn were programmed in the spacecraft’s onboard computer before launch.

This first burn was an issue for the previous Soyuz mission and the TMA-13M developed a major issue during the Dv3 burn, prompting mission control to move to a new flight profile and resulted in the crew and spacecraft docking with the ISS two days later. Post-launch testing indicated the 24 second burn never occurred as a result of an attitude problem with the Soyuz. An over-performance during the Soyuz-FG’s ascent into space caused the flight computer to issue a “no burn” command.

The previous launch yielded an apogee 65 feet (20 km) higher than expected, thus altering the requirements necessary for the TMA-12M burns.

Both Dv3 and Dv4 burns are designed to correct booster performance, the onboard computer used its attitude thrusters instead of its main engine for the burn. This error, most likely caused by a computer software issue, in conjunction with the incorrect attitude, resulted in no burn at all.

The Soyuz managed to dock with the ISS without any issue, after ground controllers opting for a back up two day rendezvous and all subsequent burns were without issue.

Over the next five hours, if all goes well, Russian Ground Site (RGS) will uplink orbital parameters during the spacecraft’s second orbit, before eight scheduled rendezvous burns.

At this time, Wiseman, Gerst and Suraev will be allowed to unstrap and enter the Orbital Module, stretching their legs and using the bathroom facilities if necessary.

After a successful docking with the station, ISS Commander and NASA astronaut Steve Swanson along with Flight Engineers Oleg Artemyev and Alexander Skortsov will open the hatches and welcome their new crew members aboard. The current ISS trio have been living and working on the station since March 27, 2014. A crew of six will remain on board until September 10th, when Swanson, Skortsov and Artemyev are scheduled to return to Earth. This will signal the end of Expedition 40 and the beginning of Expedition 41, where cosmonaut Maxim Suraev will be the commander.

Wiseman, Suraev and Gerst are well on their way to spending 166 days in space. Wiseman is a U.S. Navy commander, and Alexander Gerst is a German geologist; both are currently enjoying their first mission in space. This mission is Suraev’s second long-duration flight. He logged over 1696 days in space as a flight engineer for the Expedition 21/22 mission.

During his time in space, Suraev completed a 5-hour, 44-mintue spacewalk on January 14, 2010 in order to prepare the Poisk Mini-Research module for vehicle docking. A few days later, Suraev broke in the module when he relocated the Soyuz TMA-16 spacecraft to that very port.

Several EVAs are scheduled for this mission including two on the Russian side and three on the NASA side. Also during this mission, the trio of Wiseman, Gerst and Suraev will receive four separate resupply vehicles, including Orbital Sciences’ Cygnus, a Russian Progress, ESA’s fifth (and final) Automated Transfer Vehicle (ATV) and a SpaceX Dragon capsule.