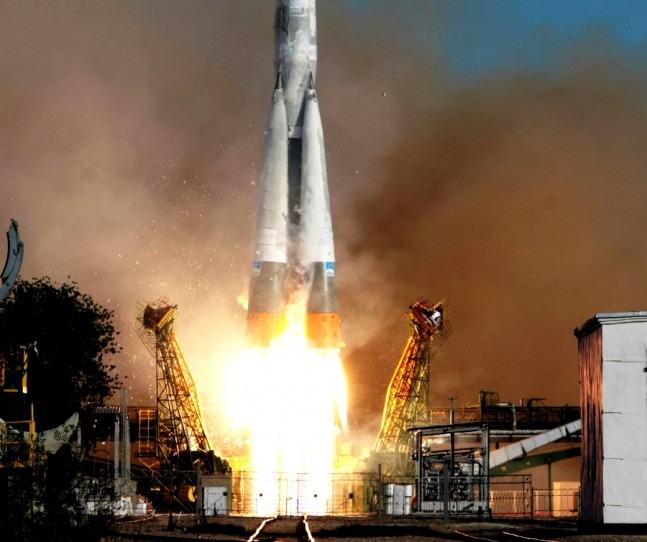 A Russian Soyuz-2-1B rocket successfully sent the Meteor-M 2 weather satellite to orbit. Liftoff occurred at 11:58:28 a.m. EDT (1558:28 GMT) from the Baikonur Cosmodrone in Kazakhstan on Tuesday, July 8. Today’s launch also included several secondary payloads including Scotland’s first satellite. In a strange twist, much like SpaceX’s June 21 launch attempt for the Orbcomm OG2 mission, coverage was “blacked out” 30 minutes prior to liftoff – suggesting a trend toward secrecy.

The Meteor-M2 satellite was launched to replace the Meteor-M3 series and will use the following instruments to complete its mission: MSU-MR – will map global and regional cloud cover, KMSS – multichannel scanning unit for Earth surface monitoring, MTVZA – an image and scanner which will monitor atmospheric temperature and humidity profiles as well as sea surface wind, IRFS-2 an advanced IR sounder, Severjanin – SAR for ice monitoring as well as Radiomet –  radio occulation unit for atmospheric temperature and pressure profiles. Meteor M2 can trace its lineage back to the 1960s with Russia hoping to loft four more of the latest generation of these spacecraft by 2015. Today’s flight also saw a wealth of smaller payloads share the ride to orbit with Meteor M2.

The secondary payloads include the SkySat 2 spacecraft which was launched on behalf of Skybox Imaging and will provide ground imaging services, the TechDemoSat 1 spacecraft for the United Kingdom and Surrey Satellite Technology Ltd., the Norwegian AISSat-2, Canada’s M3MSat, DX-1 and others. The operators for the DX-1 mission issued the following statement regarding today’s launch.

“Dauria is excited about the launch of DX1, especially as interest in remote sensing and the commercial satellite industry in general is quickly growing,” said Mike Kokorich, founder and president at Dauria Aerospace. “Following our recent partnership with Elecnor Deimos, this launch underscores our commitment to promoting accessibility and innovation in technology. We are also looking forward to sharing our Google Glass experience with the public.”

DX-1 will provide global satellite-based remote sensing information services, with support from the Russian Federal Space Agency (Roscosmos). One of the more prominent of these so-called secondary payloads is undoubtedly Ukube-1 – Scotland’s first satellite. The following description of which was provided by the spacecraft’s manufacturer:

UKube-1 carries a number of experiments and payloads and also the FUNcube-2 transponder and  telemetry sub-system. This is intended to support the current, very successful, operations of FUNcube-1 and to provide an even better operational capability for schools and colleges to use for hands on educational outreach around the world.

Helping the Soyuz booster to lift its payload out of Earth’s atmosphere were four strap-on liquid-fueled boosters. Each of which was filled with about 86,332 lbs (39,160 kg) of fuel. Four of these boosters, each some 64 feet (19.6 meters) tall and 9 feet (2.68 meters) in diameter were affixed to the sides of the rocket. Each booster was equipped with an RD-107A rocket engine which imparted some 837.5 kilonewtons of thrust at liftoff. The RD-107A delivered this thrust via four combustion chambers which were in turn fed by a turbopump along with several auxiliary pumps which deliver 200 lbs (91 kg) of Kerosene and 498 lbs (226 kg) of liquid oxygen every second. The boosters maintain the propellant tanks at flight pressure via vaporized nitrogen. The four boosters only remained with the rocket a minute-and-a-half into the flight. Once that fuel had been expended, some 118 seconds after liftoff, they were jettisoned from Soyuz and fell back to the Earth where they slammed into the Kazakh steppes.

Soyuz’s core stage, the slender interior section of the rocket, served as the launch vehicle’s first and second stage during today’s flight. Some 91 feet (27.8 meters) in length and 9.67 feet (2.95 meters) in diameter it contains both a oxidizer tank along with fuel tank which contain a total 198,856 lbs (90,200 kg) of fuel.

The core stage was activated about 17 seconds before liftoff took place. Once the flight computers had confirmed that all systems are functioning as advertised it and the rocket’s other components are sent on their way. The core stage burned for some 290 seconds before it separated from the third stage. The core stage’s power is derived from an RD-108A engine, similar in design to the RD-107A, it also features four combustion chambers as well as the same pump. Much like the boosters, the turbopump is powered by hydrogen peroxide. During the course of its mission some 5,732 lbs (2,600 kg) will be burned. At launch, the RD-108A delivered some 792.5 kilonewtons of thrust. In the vacuum of space, the engine imparted substantially more, about 990.2 kilonewtons.

The rocket’s four 35-kN vernier engines can each be gimbaled which provided the rocket with three-axis attitude control as the Russian booster conducted its journey out of Earth’s gravity well. Soyuz’s avionics are contained in its upper stage. This configurations is different than older designs of the rocket. The Soyuz-2 has a digital onboard computer which guided the rocket via a 3-axis inertial measurement unit. As Soyuz worked its way to orbit, this system provided guidance and control  and also relayed telemetry to mission monitors back on the ground.

Soyuz’s third stage measured about 22 feet (6.74 meters) in length and 9 feet (2.66 meters) in diameter and carried 55,997 lbs (25,400 kg) of propellants. Different than the other engines on Soyuz, this segment employed an RD-0124, which is a gas generator type engine. It has four combustion chambers which provide 294.3 kilonewtons of thrust.

The launch vehicle’s mission is completed by its Fregat upper stage which is capable of completing multiple burns and in so doing placed its payload(s) in their correct orbits. To be able to do this, Fregat has its own power, propulsion and control systems allowing it to operate for up to 48 hours.

Today’s flight had been slated to occur no fewer than four times before today’s launch with prior dates on December, February, June 19 and June 26. As noted by NASASpaceFlight.com, media coverage was blacked out some 30 minutes prior to liftoff. Space Exploration Technologies also did something similar to Roscosmos this past month. These events are abnormalities with blackouts of this type not seen since the Cold War.