Is a sitcom Chris Hadfield’s next frontier? ABC comedy in the works, report says 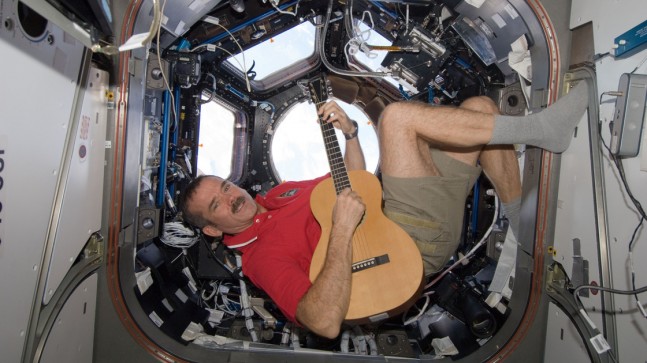 Chris Hadfield in the Cupola of the ISS. Photo Credit: NASA

It’s possible that Chris Hadfield’s best-selling book will become a sitcom! The astronaut who quickly became the world’s most-wanted Canadian last year, based on his amusing YouTube videos and stunning space pictures, is involved in production of a sitcom based on An Astronaut’s Guide To Life On Earth, Deadline reports. “The TV series is described as a family comedy about an astronaut who is back from space and finds that re-entering domestic life might be the hardest mission he’s ever faced,” wrote Deadline. Hadfield is slated to be the consulting producer on the show, which has been approved for pilot production.

Hadfield made headlines during his third and final spaceflight in 2012-13, part of which saw him as commander of the International Space Station’s Expedition 35. His five-month flight in space saw his Twitter numbers soar as he virtually hobnobbed with celebrities and worked social media every day, with the help of his son Evan. (This was done in between running one of the most scientifically productive missions on the station ever).

Weeks after returning to Earth, Hadfield retired from the Canadian Space Agency. His second book, You Are Here: Around the World in 92 Minutes, is expected to be released in October.

Space is a serious business, but there are some comedies associated with it. Former NASA astronaut Mike Massimino has been a repeat guest on The Big Bang Theory, particularly when one of the main characters went into space. NBC is also working on a sitcom called Mission Control, which describes the challenges of a female aerospace engineer trying to make her way in the male-dominated field of the 1960s.

ABC also is taking space to a more serious side, as it is expected to make a miniseries based on the Lily Koppel bestseller The Astronaut Wives Club — a look at the wives of the first astronauts in the 1960s.

This article first appeared on Universe Today and can be viewed here: Sitcom

With so many other Canadians active in American show business, Hadfield should feel right at home. The man does have a flair for subtle comedy. By coincidence, a couple days ago I was watching his video from ISS in which he tried making and eating a “space burrito” based on a recipe some celebrity chef had concocted using only ingredients from the ISS larder. Great stuff.