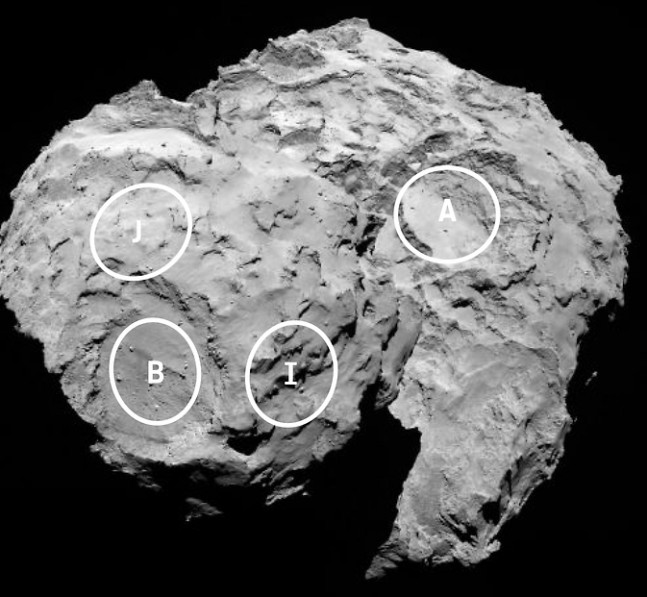 Two weeks after the European Space Agency’s (ESA ) Rosetta spacecraft arrived at Comet 67 P/Churyumov-Gerasimenko, scientists have been busy gathering data in preparation for an upcoming landing on the comet’s surface. If all goes according to plan, in November, Philae will be the first spacecraft to ever land on the surface of a comet. Data collected over the last two weeks is helping scientists to select one of five potential landing sites.

The landing is slated for mid-November, when the comet will be approximately 279 million miles (450 million kilometers) away from Earth. Since comet 67P had never been viewed up close, researchers had to wait until Rosetta’s rendezvous with the cosmic snowball to begin the hunt for the best landing site. Comet material changes rapidly as it approaches the Sun, so the clock is ticking for a safe and accurate deployment of the 220-lb lander. Rosetta and her panel of instruments are designed to study how the comet changes as it is subjected to increasing solar heat. The spacecraft will observe how the coma evolves, and any potential surface changes. Philae is equipped with its own panel of instruments and will be recording data at the comet’s surface. Both Rosetta and Philae will work together on the CONSERT experiment, sending and detecting radio waves in the comet’s interior, in order to determine its interior structure.

Selecting the proper landing site, is a complex process. Many factors play a part including the technical needs of both the orbiter and the lander during all phases of separation, descent and landing, surface operations and considering the needs of the 10 instruments aboard Philae.

“This is the first time landing sites on a comet have been considered,” said Stephan Ulamec, Philae Lander Manager at the German Aerospace Center, Cologne, Germany. “The candidate sites that we want to follow up for further analysis are thought to be technically feasible on the basis of a preliminary analysis of flight dynamics and other key issues – for example, they all provide at least six hours of daylight per comet rotation and offer some flat terrain. Of course, every site has the potential for unique scientific discoveries.”

The five potential landing sites are spread over the comet’s two lobes and a primary site will be selected in the upcoming weeks. Image Credit: ESA

According to NASA and ESA, when analyzing a potential landing site, scientists had to ask themselves: Will the lander be able to maintain regular communications with Rosetta? How common are surface hazards such as large boulders, deep crevasses or steep slopes? Is there sufficient illumination for scientific operations and enough sunlight to recharge the lander’s batteries beyond its initial 64-hour lifetime without causing overheating?

The sites were assigned a letter during an initial pre-selection process, which resulted in 10 potential sites. Further analysis has narrowed the field down to five sites.

“The process of selecting a landing site is extremely complex and dynamic; as we get closer to the comet, we will see more and more details, which will influence the final decision on where and when we can land,” said Fred Jansen, Rosetta’s mission manager from the European Space Agency’s Science and Technology Centre in Noordwijk, The Netherlands. “We had to complete our preliminary analysis on candidate sites very quickly after arriving at the comet, and now we have just a few more weeks to determine the primary site. The clock is ticking and we now have to meet the challenge to pick the best possible landing site.” Close-up of site A. This area is an interesting target, but further data is needed on slopes and depressions. Image was captured on August 16 by OSIRIS camera. Image Credit: ESA

From here, each of the five candidate sites will be examined carefully and a comprehensive analysis of each will determine what orbital and operational strategies could be used for landing. As each of these sites are being analyzed, Rosetta will be moving within 30 miles (50 km) of the comet, facilitating a more detailed analysis. By September 14, the five potential sites will have been properly studied, ranked, and a primary site will be selected. The next step will be to develop a detailed strategy for landing operations. A backup site will also be determined.

During Rosetta’s approach, scientists discovered the comet has two distinct lobes, further complicating the landing process. The five potential landing sites are spread over the comet’s two lobes. The corresponding letters do not signify any ranking. Sites B, I, and J are located on the smaller lobe and sites A, and C are located on the larger lobe.

“Based on the particular shape and the global topography of Comet 67P/ Churyumov-Gerasimenko, it is probably no surprise that many locations had to be ruled out. The candidate sites that we want to follow up for further analysis are thought to be technically feasible on the basis of a preliminary analysis of flight dynamics and other key issues – for example they all provide at least six hours of daylight per comet rotation and offer some flat terrain. Of course, every site has the potential for unique scientific discoveries,” stated Jean-Pierre Bibring, a lead lander scientist and principal investigator of the CIVA instrument.

Bibring went on to say, “The comet is very different to anything we’ve seen before, and exhibits spectacular features still to be understood. The five chosen sites offer us the best chance to land and study the composition, internal structure and activity of the comet with the ten lander experiments.”

Rosetta is an ESA mission with contributions from Europe’s Member States and NASA. Rosetta’s Philae lander is provided by a consortium led by DLR, MPS, CNES and ASI. Rosetta will be the first mission in history to rendezvous with a comet, escort it as it orbits the Sun, and deploy a lander.

First launched a decade ago, in March 2004, Rosetta was awakened from a record 957 days in hibernation back in January 2014. Rosetta, and her lander Philae, are the first vehicles to orbit and land on a comet. With this mission, scientists hope to resolve many of the questions we have about the origin and evolution of our solar system, and also what role comets play in the spread of water throughout the solar system.

Want to view an animation of Rosetta’s mission from launch until today? Visit Solar System Scope. You can watch Rosetta launch and fly along comet 67P, as well as explore other bodies in our solar system. Check out the animation below: