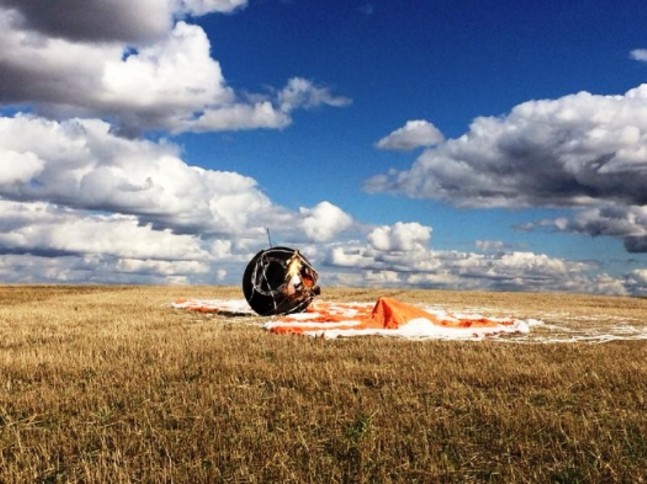 The Foton-M4 descent capsule with famed reptilian cosmonauts, known affectionately as the “sex geckos” (owing to the carnal nature of their space voyage), and also with drosophila fruit flies, seeds of plants, has landed in the Orenburg Region, an official in the press service of Russia’s Federal Space Agency (Roscosmos) told ITAR-TASS on Monday.

The touchdown of the Foton spacecraft took place at 09:18 UTC, Roscosmos announced around half an hour after the fact. After landing, the recovery team started rushing to the vehicle. Once reaching the landing site, a field lab was established to perform initial analysis of the scientific payloads at the landing site. Unfortunately, all the five geckos have died.

“We can’t say yet at which stage of Foton’s space flight it happened,” a source at the Academy of Sciences told RIA Novosti on Monday. “At the same time, the fruit flies were in a perfect condition: they produced offspring.” The geckos had been on a two-month mission launched to facilitate research on the effects of zero-gravity on reproductive systems.

The reptiles died at least a week ago as their bodies have already mummified, the Academy’s Medical-Biology Institute said later. The Foton-M4 capsule after landing in Southern Russia on Sept. 1, 2014. Photo Credit: Roscosmos

A source “who took part in securing the lander” told Interfax that “as usually happens in such instances, [the space agency] will soon appoint an emergency commission to find out these animals’ cause of death.”

The Foton-M4 satellite was launched on July 19, 2014 from the Baikonur space center in Kazakhstan.

The specimens included geckos, silkworm eggs, dried seeds, fruit flies, and mushrooms. The geckos were part of biology experiments conducted by Russia’s Institute of Medico-Biological Problems on the effects of weightlessness on mating.

The biosatellite experienced problems earlier in July, when communication with Foton-M was lost for more than a week but successfully restored. The design and onboard control systems of Foton-M enable its self-sufficient operation.

Since microgravity science experiments had already been initiated and would have been significantly disturbed by the engine burn, teams decided to skip the maneuver entirely and conduct the mission in the elliptical orbit.

Over the course of six weeks, Foton-M4 completed a total of 22 experiments accounting for a total science payload of 420 kilograms installed inside the pressurized capsule and on its exterior in special containers that were opened up to expose samples to space before closing the compartments up for re-entry at the end of the flight.

The first satellites of the series was launched in 1985 and operated for 13 days.

In 2005, the Foton-M2 satellite carried out about 20 scientific Russian and European research programs. The next satellite, Foton-M3, in 2007 performed 45 Russian and foreign experiments. This article was originally published on Astro Watch by Tomasz Nowakowski and can be viewed here: Geckos

Wow, talk about the “mile-high club”. I hope that at least the little guys met their maker with contented smiles on their faces.