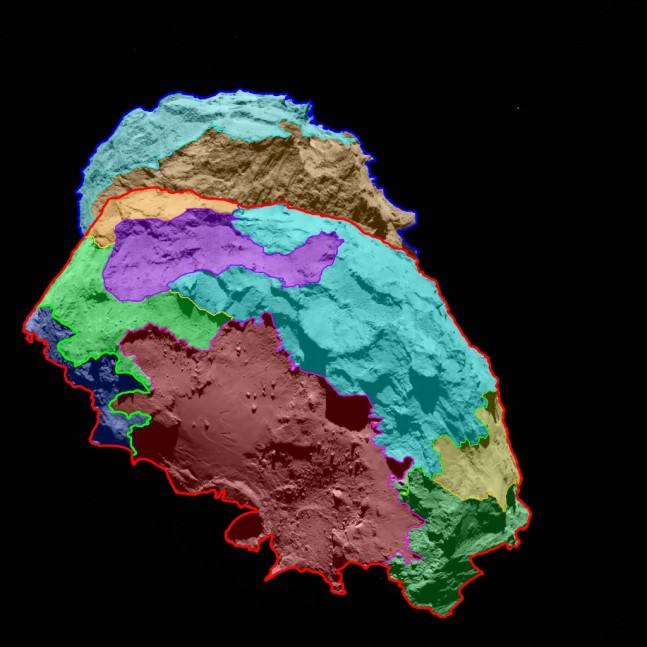 Thanks to Rosetta's OSIRIS instrument, scientists have a preliminary map of Comet 67P, divided into regions based on their morphology. Image Credit: ESA

One of NASA’s four instruments aboard the European Space Agency’s (ESA’s) Rosetta spacecraft has returned its first scientific findings. The ALICE instrument, first began scanning comet 67P/Churyumov-Gerasimenko ‘s surface roughly a month ago in an effort to determine the origin, composition, and internal processes to gather data we cannot collect via ground-based or even Earth-orbiting instruments. This new data is helping scientists map the surface in great detail and also narrow down a landing zone.

Rosetta’s ALICE instrument. ALICE is not an acronym, but a name Stern chose. Image Credit: NASA

Scientists were a bit shocked to discover the comet’s surface was not as expected. When viewed in the ultraviolet portion of the spectrum, they observed the surface to be darker than charcoal and void of any large, icy patches. Due to its location and distance from the Sun, any exposed water-ice would not be vaporized by the Sun and would be present on the surface.

Alan Stern, ALICE principal investigator at the Southwest Institute in Boulder, Colorado stated: “We’re a bit surprised at just how unreflective the comet’s surface is and how little evidence of exposed water-ice it shows.”

ALICE has also detected the presence of both hydrogen and oxygen in the comet’s coma (atmosphere). The ALICE instrument is packed with over 1,000 times the data-gathering capabilities of the previous generation’s instruments, while weighing under nine pounds (4 kilograms) and drawing only 4 watts of power. ALICE is part of a group of 11 different science instruments aboard Rosetta, all designed to help unlock the secrets of comet 67P. NASA is also contributing to the Microwave Instrument for Rosetta Orbiter (MIRO), the Ion and Electron Sensor (IES), a portion of the Rosetta Plasma Consortium Suite, and the Double Focusing Mass Spectrometer (DFMS) electronics package for the Rosetta Orbiter Spectrometer for Ion Neutral Analysis (ROSINA).

At the European Planetary Science Conference (EPSC) in Portugal this week, Rosetta team members revealed a preliminary map of comet 67P’s surface. The findings revealed a multi-faceted surface with multiple terrains, deep depressions, cliffs, craters — some areas even appear to have been influenced by the comet’s activity. This map, along with new high-resolution images, shows how diverse the surface is and also provides the science team with the daunting task of identifying what each region indicates in terms of composition and evolution.

The hunt for Philae’s landing zone was recently narrowed down to five locations, and with the help of the new images and surface map, scientists will be able to make their final selection. On September 13 and 14, the landing team and science team will get together to review the data and select a primary and backup landing site. As both Rosetta and comet 67P will continue to move closer and closer to the Sun, the OSIRIS team will closely monitor the comet’s surface, watching for any potentially hazardous surface changes. They do not expect any major changes to the borderline of the different regions mapped, but are hoping to observe subtle surface changes. Through these surface changes, scientists are expecting to discover more about the role a comet’s activity plays in its evolution.

Rosetta arrived at its target comet approximately one month ago, after a ten year journey through the solar system. Rosetta’s Philae lander is expected to touch down on the surface of 67P in November, marking the first time any spacecraft has landed on a comet’s surface.