Robonaut gets its ‘space’ legs 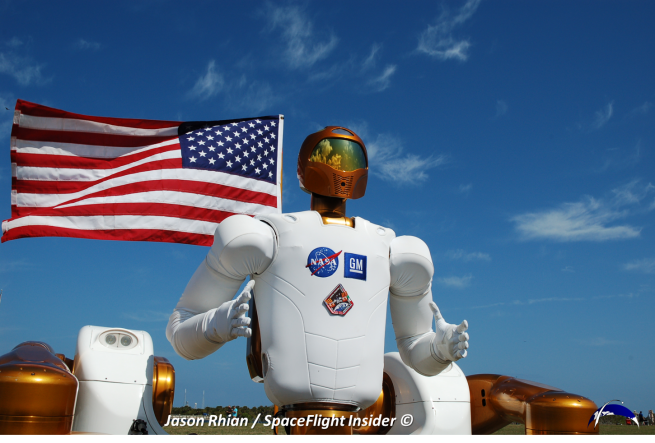 NASA's Robonaut 2, is poised to finally gain some legs - but they are unlike those of the robot's human counterparts. Photo Credit: Jason Rhian / SpaceFlight Insider

NASA’s Robonaut, has been on orbit since 2011, when the crew of STS-133 delivered it to the International Space Station (ISS). However, the robotic explorer is only half the ‘bot’ that it could be. NASA has decided to correct this by providing Robonaut 2 or “R2” with legs. They are, however, not the type of legs employed by other famous droids such as C3PO or Optimus Prime. Heralded as the next milestone in the robot’s evolution – the legs are nothing like what one would normally envision.

Once R2 gets its legs in 2014, they will put his organic counterparts’ legs to shame. Each leg can extend to 9 feet, has extensive range and flexibility and has seven joints per leg. Each ends in a grasper which will allow R2 to take full advantage of the various handrails positioned around the exterior of the ISS. These legs are less about walking, which is all but useless in space – and more about grasping, the preferred method of moving about the ISS.

Before this can take place, R2 will require some modifications as the robot only consists of a post and a base below the “waist.” If all goes according to plan, these new legs will be sent to the ISS next year. Robonaut 2’s legs are designed to propel it along the interior and exterior of the ISS. Photo Credit: NASA

The legs were funded by NASA’s Human Exploration and Operations and Space Technology mission directorates. If they check out on orbit, the robot will be more able to complete tasks both inside and outside of the space station.

“NASA has explored with robots for more than a decade, from the stalwart rovers on Mars to R2 on the station,” said Michael Gazarik, NASA’s associate administrator for space technology. “Our investment in robotic technology development is helping us to bolster productivity by applying robotics technology and devices to fortify and enhance individual human capabilities, performance and safety in space.”

Astronauts have tested out the design on board the ISS and provided recommendations as to what would best serve the robot as it conducted its various tasks.

Since R2 arrived at the orbiting laboratory, the various expeditions who have called the space station their home have checked out how the robot operated in zero gravity.

It is possible that lessons learned from the development of R2’s legs could cause a series of side benefits as well. Astronauts, suffer bone loss and other health issues in space could benefit from a somewhat similarly-designed exoskeleton. Closer to home, systems tested out on the Robonaut design could aid people with physical disabilities here on Earth.

Progress is unstoppable and such is the case with Robonaut. The next iteration of the design, known as R5, recently made its debut. NASA has stated that the development of Robonaut is just one more sign that the International Space Station is serving as a test bed for new technologies.

For information about Robonaut, visit:

With the bruising and battering Detroit has received lately with the city filing for bankruptcy, the former mayor going to federal prison, and broken-down EMS units stacked-up like firewood, the sight of the GM logo on the chest of Robonaut, the same as that on Detroit’s tallest building, is a tremendous morale booster. Detroit is proud of one of it’s favorite sons!! GO NASA! GO ROBONAUT! (especially now that you’re getting legs) 🙂