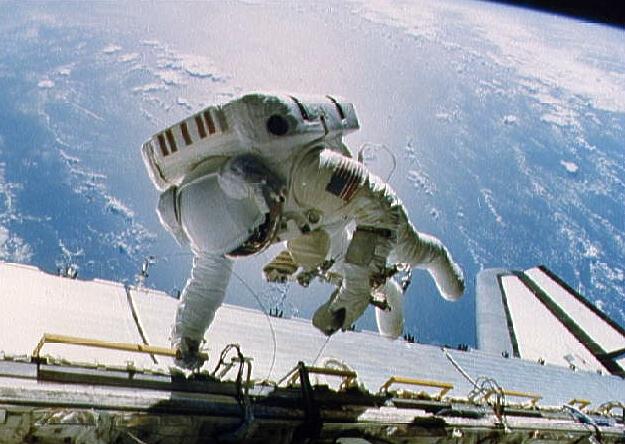 We bid farewell this week to former Naval pilot and NASA astronaut Dale Gardner, who died on Wednesday, February 19, 2014, from a brain aneurysm – he was 65. During his NASA career, Gardner flew two shuttle missions: STS-8 in 1983 aboard Challenger and STS-51A in 1984 aboard Discovery. During these two missions, he logged more than 14 days in space.

Gardner’s first shuttle mission, STS-8, deployed the INSAT-1B satellite. He is best remembered for his work during STS-51A, the first salvage mission conducted in space history. Gardner successfully captured two satellites. loading them into the shuttle to return them to Earth for repair. He performed his EVAs in space untethered using NASA’s Manned Maneuvering Unit (MMU) and was the last of only six shuttle astronauts to ever do so (MMUs are no longer used; astronauts now wear a similar backpack device for emergency purposes).

Mission Specialist Dale Gardner holds up a “For Sale” sign, referring to the malfunctioning Palapa B2 and Westar 6 satellites. Photo Credit: NASA

Just prior to the loss of space shuttle Challenger in 1986, Gardner was in training, scheduled to fly again on the first space shuttle mission to launch into polar orbit from Vandenberg Air Force Base (VAFB) in California. Due to safety concerns after the Challenger accident, the launch was canceled along with the VAFB shuttle program.

In October 1986, Gardner retired from the astronaut corps and was assigned by the Navy to U.S. Space Command in Colorado Springs. For two years he acted as the deputy chief of Space Control Operations in Cheyenne Mountain before being promoted to Captain and becoming deputy director for Space Control at Peterson Air Force Base. In that position, Gardner’s responsibilities included surveilling and tracking all man-made objects in Earth orbit and the protection of U.S. and friendly space systems.

An avid sports enthusiast, Gardner enjoyed snow skiing, golfing, tennis, and jogging. Other interests included woodworking and photography. Gardner was the father of two children, Lisa and Todd (deceased), from his first marriage to Sue Ticusan. He is survived by his current wife, Sherry, his daughter, Lisa, and stepchildren Erika and Christopher.

Note: a portion of this text appears in Dale Gardner’s official NASA biography

There wasn’t room in the article to say that Dale was a very nice guy with a great sense of humor. I believe that up to graduation from the U. of Illinois in 1870, he had the highest ever grade point average for electrical engineers. I was a room mate of his. We flew from Champaign, Illinois to Glenview Naval Air Station together to join the Navy in 1970.He wanted to be a flight officer. Rest in peace my old friend.

My apologies. There is a typo in line two, second grouping. Dale graduated from the U.of I. in 1970.