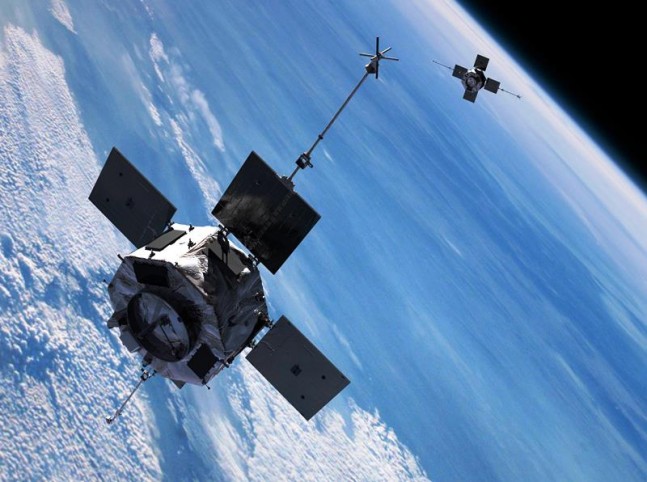 NASA’s twin Van Allen Probes will celebrate two years of studying the sun’s influence on our planet and near-Earth space today. The probes, shortly after launch in August 2012, discovered a third radiation belt around Earth when only two had previously been detected.

The radiation belts are layers of energetic charged particles held in place by the magnetic field surrounding our planet. The new third belt occurred only occasionally but persisted for as long as a month. This revealed to scientists the dynamic and variable nature of the radiation belts and provided new insight into how they respond to solar activity.

“The primary science objective of the Van Allen Probes is to provide understanding of how particles in the radiation belts form and change in response to energy input from the sun,” said Mona Kessel, the mission’s program scientist at NASA Headquarters in Washington.  “The discoveries and understanding gained have far exceeded expectations.” The probes, each weighing just less than 1,500 pounds, were specifically designed to withstand and study the harsh radiation belt region around Earth. The belts are critical regions that have a connection to Earth’s atmosphere and space-based technologies. The belts are affected by solar storms and space weather events and as a result, can swell dramatically. When this occurs, they can pose dangers to communications and GPS satellites, as well as humans in low-Earth orbit.

Formerly known as the Radiation Belt Storm Probes, the mission was renamed Van Allen Probes in November 2012 in honor of Dr. James Van Allen, who discovered the two radiation belts in 1958.

The twin spacecraft have also revealed how particles in the heart of the belts can be accelerated to nearly the speed of light; proven that electrons in the belts are undergoing acceleration from very low frequency plasma waves; and shown persistent stripe-like structures are a common feature of the inner belt, and are caused by Earth’s rotation, a mechanism previously thought to be incapable of such an effect.

“The Van Allen Probes mission has given us the means to validate theories about plasma physics and the acceleration processes going on inside the belts,” said Barry Mauk, Van Allen Probes project scientist at the Johns Hopkins University Applied Physics Laboratory (APL) in Laurel, Maryland. “They also have shown us new structures and features in this region of space, the existence of which we had never suspected. It has been a very illuminating two years, and we look forward to many more with these remarkable spacecraft.”

The Van Allen Probes are the second mission in NASA’s Living With a Star (LWS) Program to explore aspects of the connected sun-Earth system that directly affect life and society. LWS is managed by the agency’s Goddard Space Flight Center in Greenbelt, Maryland. APL built the spacecraft and manages the mission for the agency’s Science Mission Directorate in Washington.