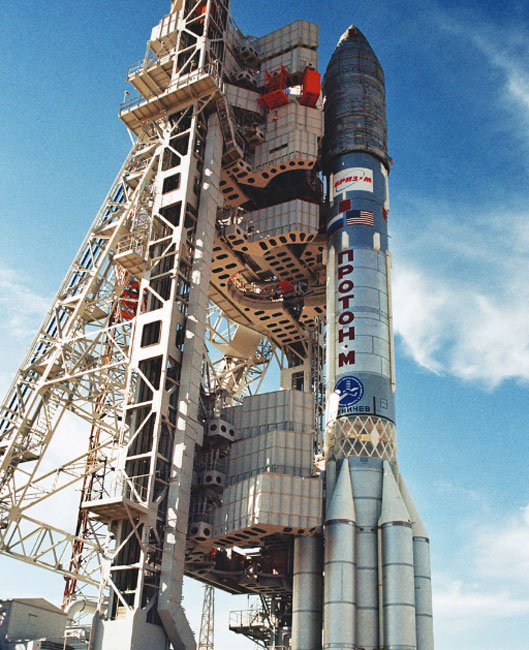 October 20, 2013 is the scheduled launch date for a Proton-M rocket to launch from Baikonur Cosmodrome carrying the American Sirius FM-6 radio satellite.

The launch was pushed back from the original date of August 14 following a failed July Proton-M launch, in which a Proton-M/DM-03 rocket with three Russian GLONASS (Global Navigation Satellite System) satellites – the Russian equivalent of GPS – were lost. In this incident, the rocket started to lose stability within just a few seconds of launch. The onboard guidance computer was unable to correct the trajectory, and the rocket began to break up in mid-air. The rocket hit the ground just 30 seconds after lift-off. This crash was the seventh failed launch in which a Proton-M was involved – however of those seven only two directly relate to the Proton-M itself. Following the July crash, the Russian Government announced it would be stepping in to shake up what it called “the failure-prone space sector”.

A successful launch of a Proton-M rocket on September 30, the first since the accident, has helped return confidence in the rocket. And the October 20 launch looks to be moving ahead without any issues.

The origins of the Proton-M go back to the Soviet-built Proton rocket – originally designed, but never used, as a “super ICBM” – which was first launched in 1965. The fact a derivative of it is still in use nearly 50 years later makes it one of the most successful heavy boosters in spaceflight history.

Sirius XM Radio and the Proton-M have some history together too, as Proton rockets have successfully carried five previous satellites into orbit for the company. The Sirius FM-6 satellite will provide satellite radio for the next 15 years. Image Credit: SSL

This particular Proton-M will be carrying the Sirius FM-6 radio satellite, built by Space Systems/Loral (SS/L), into orbit. The 6,018 kg satellite will be put in a geostationary orbit. It will provide nearly double the power of the satellites currently in Sirius XM Radio’s fleet. The Sirius FM-6 has a predicted lifespan of 15 years. During this time it will help with the delivery of music, entertainment content, traffic and weather information to more than 25 million Sirius radio subscribers.

The mission, overseen by International Launch Services (ILS), will begin on Pad 39 at Baikonur Cosmodrome, Kazakhstan. The first three stages of the Proton will use a standard ascent profile to place the orbital unit – the Breeze M upper stage and the Sirius FM-6 satellite – into a sub-orbital trajectory. The Breeze M will perform planned mission maneuvers to advance the orbital unit first to a circular parking orbit, then to an intermediate orbit, followed by a transfer orbit, and finally to a geostationary transfer orbit. Separation of the Sirius FM-6 satellite is scheduled to occur approximately 9 hours, 11 minutes, and 20 seconds after liftoff.

Launch crews are currently preparing for the October 20 launch, as well as getting ready for a November 5 launch of a Russian military communications satellite. Two further Proton-M launches are planned for 2013. One on December 8, and the last on December 26.

Interested in science, aviation, and spaceflight from an early age, Jeff Darling is a writer and illustrator based near Valencia, Spain. In 2005 he started the transportation and vehicle technology website diseno-art.com which covers a wide variety of vehicles, paying particular attention to some of the more unusual modes of transport. His work has featured on the BBC's flagship technology program 'Click', and appeared in numerous magazines, books, and websites around the world. Jeff serves as one of The SpaceFlight Group's writers with a special focus on spaceflight history.