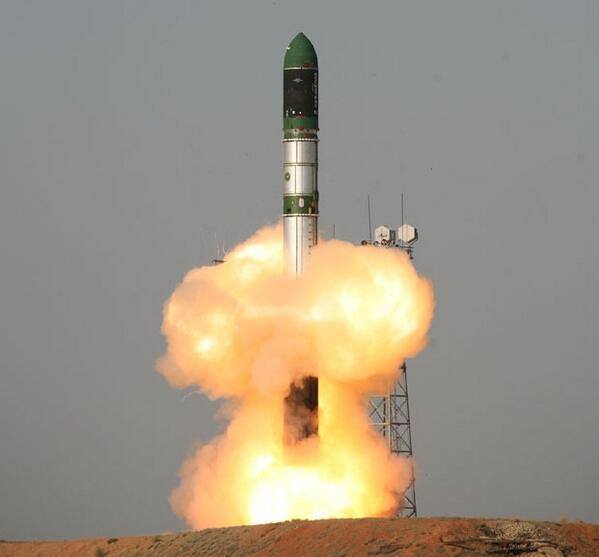 At 0710 GMT, a Soviet era Dnepr missile launched from the Dombarovsky base located in Russia with 32 small satellites on board. This accomplishment places Russia in the lead as having launched the most satellites on a single mission. Photo Credit: Kosmostras

With the launch of a Russian Dnepr rocket from the Dombarovsky base located near Yasny, Russia, the current record for the most satellites launched to orbit on a single flight was broken. On Nov. 19, a Orbital Sciences Corporation Minotaur 1 rocket ferried some 29 satellites from NASA’s Wallops Flight Facility in Virginia. Today, at 2:10 p.m. EST (0710 GMT), the Dnepr rocket, a modified Soviet-era missile thundered aloft with its payload of 32 satellites.

To deliver the various spacecraft to their orbits, the upper stage had to maneuver through a series of thruster firings. Image Credit: Kosmostras

Both the Minotaur 1 and Dnepr are based on missiles who have found a second life in the post Cold War era. Both were used to deliver a fleet of tiny satellites, man of which were produced by students. One might ask how so many satellites were hefted aloft on a single launch vehicle. Simply put, the spacecraft in question were tiny.

What have been dubbed as Cubesats, nanosatellites and such were the primary payloads of both missions launched this week and are a growing trend in space flight. With dwindling resources and in an effort to continue space exploration and utilization efforts, government institutions, companies and even individuals are looking to find ways to conduct their orbital experiments in as affordable means as possible.

Also like the Minotaur 1, Dnepr wasted little time in getting its precious cargo to their destinations, a mere fifteen minutes or so after launch and the rocket was busily deploying its numerous charges.

A release issued by Kosmostras stated the following: Those payloads include the following:

DubaiSat-2 – the second Earth-observing satellite to originate from the United Arab Emirates, this spacecraft will provide panchromatic and multi-spectral images. It will orbit at an altitude of about 372 miles (600 km).

STSAT-3 – this satellite hails from South Korea and will provide astronomical imaging as well as study galaxies. It will also observe the Earth in the infrared. The spacecraft’s Earth-observing efforts are designed to help water quality control and other environmental efforts.

SkySat-1 – U.S. spacecraft which will provide 1-4 meter resolution images for commercial use.

UniSat-5 – Italian satellite which will be used to deploy some of the other Cubesats on this flight.

Dnepr is a little more than 110 feet tall and is named after the Dnieper River. The rocket is produce by ISC Kosmostras which conducted the first launch of the vehicle on April 21, 1999.