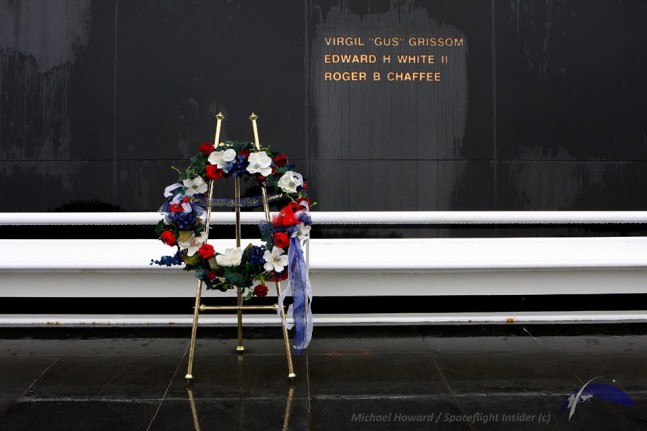 KENNEDY SPACE CENTER, Fla — Although the general public might not be aware of it, all of NASA’s three crewed tragedies took place within seven days of one another. On Jan. 27, 1967 the crew of Apollo 1 lost their lives in a fire on the pad, on Jan. 28, 1986, space shuttle Challenger exploded 73 seconds after liftoff and on Feb. 1, 2003, space shuttle Columbia broke up upon reentering the Earth’s atmosphere in the skies above Texas. Today, the space agency paused to look back on these sad events and honored the memories of those who lost their lives in the cause of space exploration.

It seemed the very skies wept for those who lost their lives in the pursuit of space exploration. Today’s ceremony was held at 10:30 a.m. EST (15:30 GMT) to honor not just fallen astronauts but other employees who lost their lives as well. This commitment to pursue the dream of space flight was one that was highlighted by NASA’s Kennedy Space Center Director and three-time space shuttle veteran, Robert Cabana who was joined by the center’s Deputy Director, Janet Petro in laying a wreath at the memorial.

After the wreath laying, Cabana reflected on the day and the names on the memorial as being those of people he personally knew and that their lives are not forgotten. He spoke of the continuing efforts surrounding manned space flight and the ongoing tests and preparation of the Orion spacecraft and it’s launch later this year on a United Launch Alliance Delta IV Heavy rocket.

NASA holds this day of remembrance every year at around this time to reflect on three tragedies separated by just five days on the calendar. The Kennedy Space Center Visitor Complex provided flowers for today’s ceremony which guests could lay at the base of the memorial.

The memorial is maintained by the Astronaut Memorial Foundation, a non-profit organization built the monument in 1991 to serve as a place toe remember all astronauts who perished either on missions or while training. It has been designated a National Memorial by Congress. Across the space agency, those working on NASA’s various efforts stopped what they were doing to remember those who had died. NASA Administrator, Charles Bolden issued the following statement about NASA’s Day of Remembrance: Today we pause in our normal routines and reflect on the contributions of those who lost their lives trying to take our nation farther into space. On our annual Day of Remembrance, please join me in giving thanks for the legacy of the STS-107 Columbia crew; the STS-51L Challenger crew; the Apollo 1 crew; and Mike Adams, the first in-flight fatality of the space program as he piloted the X-15 No. 3 on a research flight.

These men and women were our friends, family and colleagues, and we will never forget their lives and passion to push us farther and achieve more.  They have our everlasting love, respect and gratitude.

Today, their legacy lives on as the International Space Station fulfills its promise to help us learn to live and work in space and move farther into the solar system. We see our lost friends in the strivings of so many missions to take humans to new destinations and to unlock the secrets of our universe. And we honor them by making our dreams of a better tomorrow reality and by acting to improve life for all of humanity.

Let us join together as one NASA Family, along with the entire world, in paying our respects, and honoring the memories of our dear friends. They are with us still on this grand journey.

As mentioned, there have been three highly-public disasters that mar NASA’s fifty-plus year history. The first of these would shake the pillars under the space agency as it was reaching for the Moon and cost the lives of some of the agency’s most accomplished space flyers. It was supposed to be just a routine rehearsal of what would take place on the day of launch. However, a brief spark which took place in the Apollo crew capsule on January 27, 1967, combined with a hundred percent pure oxygen environment would cause what was known as the “plugs-out” test would become the first major disaster that the space agency would be forced to overcome.

The crew of three consisted of: Veteran Mercury and Gemini astronaut Virgil I. “Gus” Grissom, Edward H. White II and Roger B. Chaffee. The accident sent NASA reeling. However, it has also been credited by some as the impetus which improved the Apollo Capsule, making it capable of carrying astronauts safely to the Moon and returning them safely to Earth.

With the eyes of the world watching on January 28, 1986, space shuttle Challenger roared aloft from Kennedy Space Center’s Launch Complex 39. It was an unusually cold January morning which marked the launch of STS-51L. Seventy-three seconds after liftoff the orbiter exploded in front of a horrified audience.

This mission was given special attention by the press as it carried teacher Christa McAuliffe on board. The other crew members consisted of Commander Francis R. Scobee, Pilot: Michael J. Smith and Mission Specialists: Ellison S. Onizuka, Judith A. Resnik, Ronald E. McNair and Gregory B. Jarvis. Everything had gone wonderfully on orbit for the oft-delayed STS-107 mission, the last microgravity mission that the shuttle program had on the books. However, a piece of foam, about the size of a briefcase, had struck the leading edge of the left wing on ascent. Sixteen days later on February 1, 2003, NASA’s first space-worthy shuttle, Columbia, and her crew of seven perished on reentry.

Although like most of us that have an interest in the space program from the
early days starting with “Vanguard”our very 1st satellite and the troubles getting into orbit early on.Now to fast forward:Again,like most,I never realized that all 3 major space related tragedies took place within 27,Jan.&
1.Feb.”BLACK WEEK” as it is known in the trade.This being:27,Jan.’67-Apollo 1