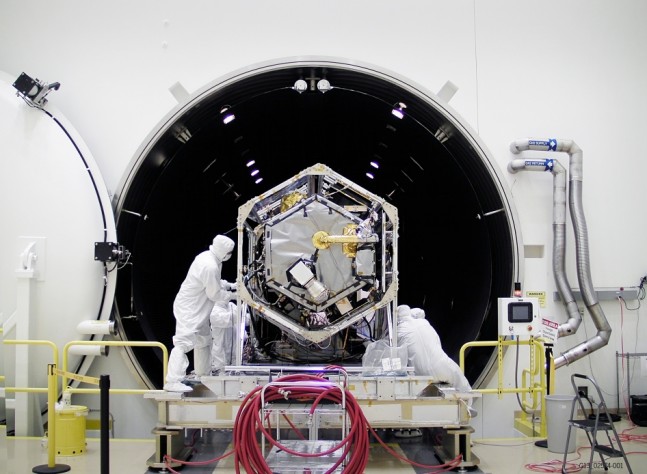 NASA’s Orbiting Carbon Observatory (OCO)-2 spacecraft is moved into a thermal vacuum chamber at Orbital Sciences Corporation’s Satellite Manufacturing Facility in Gilbert, Ariz., for a series of environmental tests. The tests confirmed the integrity of the observatory’s electrical connections and subjected the OCO-2 instrument and spacecraft to the extreme hot, cold and airless environment they will encounter once in orbit. The observatory’s solar array panels were removed prior to the test.

OCO-2 is NASA’s first mission dedicated to studying atmospheric carbon dioxide and is the latest mission in NASA’s study of the global carbon cycle. Carbon dioxide is the most significant human-produced greenhouse gas and the principal human-produced driver of climate change. The mission will uniformly sample the atmosphere above Earth’s land and ocean, collecting between 100,000 and 200,000 measurements of carbon dioxide concentration over Earth’s sunlit hemisphere every day for at least two years. It will do so with the accuracy, resolution and coverage needed to provide the first complete picture of the regional-scale geographic distribution and seasonal variations of both human and natural sources of carbon dioxide emissions as well as the places where carbon dioxide is removed from the atmosphere and stored.

This post originally appeared on NASA.gov and can be viewed here: OCO-2