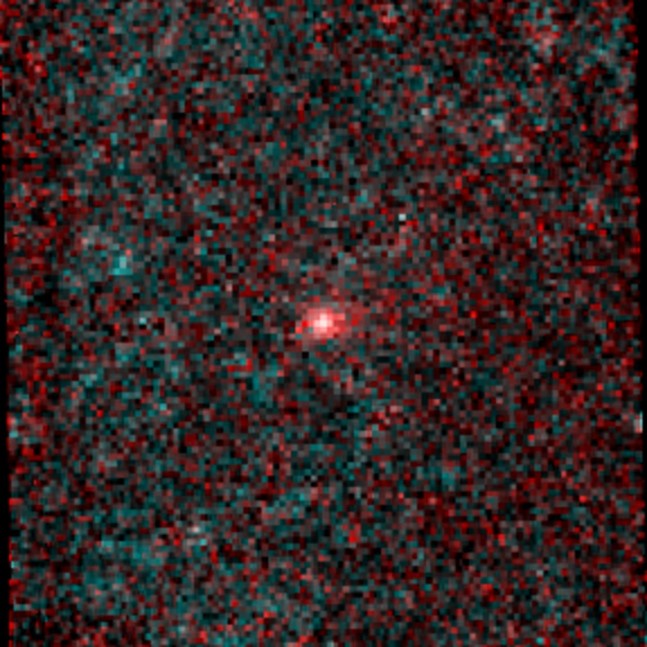 NASA’s Near-Earth Object Wide-field Survey Explorer (NEOWISE) spacecraft has spotted a never-before-seen comet. The comet, named C/2014 C3 (NEOWISE), is the first one discovered by the spacecraft since it was revived from hibernation late last year.

“We are so pleased to have discovered this frozen visitor from the outermost reaches of our solar system,” said Amy Mainzer, the mission’s principal investigator from NASA’s Jet Propulsion Laboratory in Pasadena, Calif. “This comet is a weirdo – it is in a retrograde orbit, meaning that it orbits the sun in the opposite sense from Earth and the other planets.” C/2014 C3 was discovered on Feb 14 when it was approximately 143 million miles from Earth.  The comet seems to have arrived from its most distant point in the region of the outer planets. Its tail extends about 25,ooo miles. NEOWISE’s  sky-scanning software detected the moving comet against a background of stationary stars. NEOWISE observed the comet six times over a half-day period. The discovery was confirmed by follow-up observations conducted by the Tucson, Ariz. based Near Earth Object Observation project Spacewatch.

The spacecraft, originally known as WISE, was launched in 2009 from Vandenberg AFB aboard a United Launch Alliance(ULA) Delta II rocket. WISE discovered more than 34,000 asteroids and characterized 1580,000 during its primary mission. The spacecraft’s primary mission lasted eight months, ending when the  solid hydrogen cooling the telescope was exhausted. The mission continued for four months as NEOWISE and the spacecraft was placed in hibernation in 2011.

NEOWISE was reactivated in late 2013 with a new mission to search for potentially hazardous near-Earth objects.  Even without the solid hydrogen, the spacecraft can still operate at its two shortest infrared wavelengths and provide important data on the numbers, orbits and sizes of comets and asteroids. The spacecraft’s findings are automatically sent to the Minor Plane Center in Cambridge, Mass. which functions as a clearinghouse for solar system bodies. A community of amateur and professional astronomers provide follow-up observations which help establish the orbits of previously unknown objects. The spacecraft will also study previously known asteroids and comets and asteroids to better understand their sizes and compositions.

The newly revived spacecraft’s capabilities were demonstrated on December 29,2013 when it discovered a near-Earth asteroid named 2013 YP139.  The extremely dark asteroid was estimated to be about 0.4 miles in diameter.  NASA hopes that the discovery will be just the first of hundreds of asteroid discoveries for NEOWISE. “We are delighted to get back to finding and characterizing asteroids and comets, especially those that come into Earth’s neighborhood,” said Mainzer. “With our infrared sensors that detect heat, we can learn about their sizes and reflectiveness.”

Some of the objects discovered and characterized by NEOWISE could be candidates for NASA’s proposed Asteroid Redirect Mission (ARM), a mission to identify, capture and relocate an asteroid to a safe lunar orbit where it would be explored by astronauts in the 2020s. To complete this mission, NASA will have to overcome many scientific, technical and budgetary challenges, not to mention a skeptical Congress.