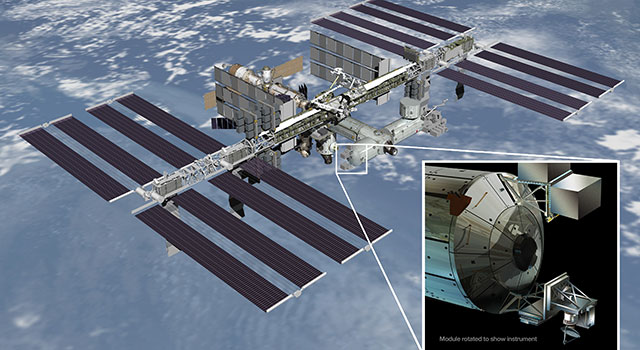 NASA’s ISS-RapidScat, a new Earth-observing instrument that will measure ocean winds while mounted on the International Space Station (ISS), is go for launch — almost. On May 12, 2014, the instrument arrived at NASA’s Kennedy Space Center in Florida from its birthplace at NASA’s Jet Propulsion Laboratory (JPL) in Pasadena, California, and will undergo final launch preparations in the coming weeks.

RapidScat is the replacement for QuikScat, a sun-synchronous Earth-observing satellite that carried the wind scatterometer SeaWinds. QuikScat was launched in 1999 and collected data on wind direction and speed over the ocean surface for more than ten years, aiding primarily in weather forecasting. Data from the scatterometer soon became available in near-real time (within 3 to 3.5 hours), which made it especially helpful in predicting hurricanes and cyclones.

In 2009, long after its planned three-year mission would have ended, it stopped sending data.

NASA had to quickly come up with a cost-effective replacement. In just about a year and a half, at around ten percent of the cost for a satellite built from scratch, the agency developed RapidScat. It reuses hardware that was built to test parts of QuikScat and takes advantage of commercially-available computer hardware instead of special radiation-resistant computer chips.

In a way, this is par for the course — QuikScat itself had been speedily designed as a replacement for its predecessor, the short-lived NASA Scatterometer (NSCAT) instrument. These replacement projects are expedited in order to minimize the gap in collected data. NASA saved more money on RapidScat by planning to mount it on the ISS, and by opting for a ride on an already-planned Commercial Resupply Services (CRS) launch.

After some final tests, the new instrument will travel in a SpaceX Dragon capsule as part of SpaceX CRS-4, launching on a Falcon 9 rocket from Cape Canaveral Air Force Station, Florida. The launch date given by NASA, as of now, is “no earlier than August.”

In its two-year mission, RapidScat will measure near-surface ocean wind speed and direction. The data collected will be extremely important for weather forecasting, storm and hurricane tracking, and studying climate. Changes in these winds also help monitor major variations like El Nino and La Nina.

Once it arrives at the ISS, ground crew will use the station’s robotic arm to install RapidScat on the Columbus laboratory module of the station. The module has three external payloads to date, one to observe the sun and two to investigate exposure to the harsh environment of space.

RapidScat is NASA’s first instrument that will observe Earth from a mount on the ISS. A second one planned for the near future is the Cloud-Aerosol Transport System, or CATS, which is “a laser instrument to measure clouds and the location and distribution of pollution, dust, smoke, and other particulates in the atmosphere,” according to NASA’s website. The planned launch date for CATS is currently Sept. 12, 2014.

RapidScat and CATS are two of five Earth science missions that NASA has scheduled for 2014. The other three are traditional satellite missions.