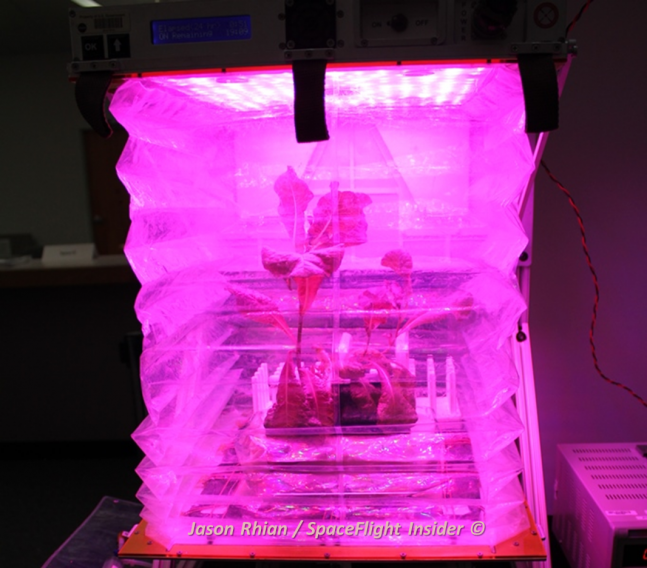 KENNEDY SPACE CENTER, Fla. – On Sunday afternoon, in the lead up to  Monday’s anticipated SpaceX launch, NASA held a news briefing to shed some light on a few of the science payloads being flown to the International Space Station  (ISS) on the CRS-3 mission.

The first of the science payloads is the Optical Payload for Lasercomm Science (OPALS) investigation.  Camille Alleyne, Ed.D., NASA’s Assistant Program Scientist for the ISS, explained that the OPALS hardware will be placed on the exterior of the station and used to test light-based / laser space-to-ground communications and data transfer.  The laser-based system  should allow for much higher transfer rates than rates allowed by traditional  radio based communication.  Alleyne stated that the change would be an  upgrade similar to switching an internet connection from “dial-up” to DSL.

Another of the science payloads is VEG-01, a proof of concept flight for the VEGGIE plant growth facility which will be used to test issues related to  potential space-based crop production.  In particular, VEG-01 will focus on  the growth and development of Outredgeous Lettuce seedlings in a spaceflight  environment.

Also being flown on CRS-3 is the lower, or “legs,” section of the Robonaut  2 humanoid robot. The torso section of the robot has been on the station since  2011.  NASA expects that adding the “legs” will significantly enhance  Robonaut’s capabilities and is hopeful that the robot will one day be capable of  performing tasks on both the interior and exterior of the station.

Another significant science payload is a National Institutes of Health funded “T-Cell Activation in Aging” experiment which will attempt to determine  the cause of human immune system depression during spaceflight.  This research could also assist in determining the cause of a similar depression of  the immune system which occurs during aging.

Stay connected with Spaceflight Insider for updated information and any changes that may occur concerning this delayed launch of SpaceX CRS-3.