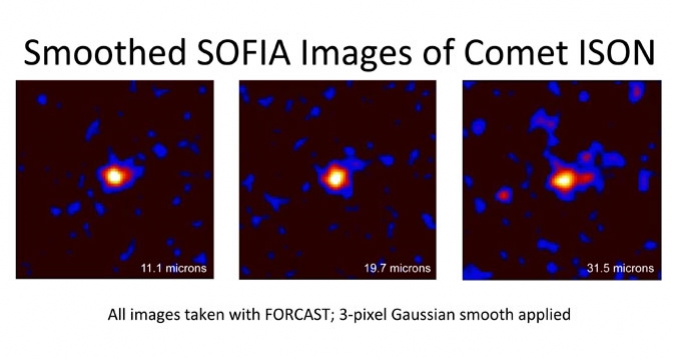 Images of Comet ISON were obtained by SOFIA's FORCAST camera at wavelengths of 11.1, 19.7, and 31.5 microns. Measurements at 31.5 microns, crucial for determining the temperature and other characteristics of the comet's material, cannot be made using ground-based telescopes. Image Credit: NASA / Diane Wooden

NASA’s SOFIA (Stratospheric Observatory for Infrared Astronomy) recently made a flight to observe “targets of opportunity” including Comet ISON. The nearly 10 hour flight was SOFIA’s  second chance to study a comet, having previously observed Comet Hartley 2 in 2010. SOFIA is a highly modified 747SP which carries a 2.5 meter – diameter infrared telescope. Flying at or above 41,000 feet, SOFIA avoids more than 99 percent of obscuring water vapor in the Earth’s atmosphere enabling it to make observations that are impossible to make from ground-based telescopes.

SOFIA is based at NASA”s Dryden Flight Research Center in Palmdale, Calif. Comet ISON recently entered the inner solar system on its first approach towards the sun. Comet ISON is considered to be a sun-grazing comet because it will pass within 730,000 miles of the sun when it reaches perihelion on Thanksgiving day, Nov. 28, 2013.

The comet was discovered by astronomers Vitali Neviski and Artyom Novichonk using the International Optical Network’s (ISON) 0.4 meter telescope in September 2012. The comet was named in honor of the institution. Principle Investigator Diane Wooden is an astrophysicist who is based at NASA Ames Research Center.
Photo Credit: NASA/ Nick Veronico

The SOFIA observations of Comet ISON were led by principle investigator Diane Wooden of NASA’s Ames Research Center. Wooden is an astrophysicist who specializes in infrared spectroscopy with an emphasis on comets.

She suggested that Comet ISON be studied at three infrared wavelengths: 11.1, 19.7, and 31.5 microns. Two of these wavelengths, 19.5 and 31.5 microns, cannot be observed by ground based telescopes because of water vapor in the Earth’s atmosphere. The 11.1 micron wavelength allows SOFIA observations to be compared with ground-based measurements made by the Subaru Telescope on Mauna Kea, Hawaii, and the Great Canary Telescope on the island of La Palma, in Spain’s Canary Islands.

Currently there are no space-based telescopes capable of operating at wavelengths greater than 4.5 microns.

“The long wavelength photometry, only possible from SOFIA, will allow us to measure the thermal emission from larger grains, which cannot be seen in scattered light at visible wavelengths,” said Wooden. “Compared with smaller submicron grains, larger grains have cooler temperatures and emit at longer wavelengths,” she added.

“Only the FORCAST instrument on SOFIA can obtain the longer wavelength photometry measurements that sample the thermal emission of the larger grains,” Wooden explained. “By modeling the FORCAST photometry, we can constrain the grain size distribution and the dust mass. The mass and loss rate of the dust are one of the fundamental characterizations of a comet.”

Studying Comet ISON’s thermal emissions yields important information about its contents and the gases it produces as it nears the sun. “We learned that the comet is dust-poor not only for small grains, as already known by the weak scattered light at visible wavelengths, but also for larger grains detectable at these mid-IR wavelengths from SOFIA,” Wooden concluded.