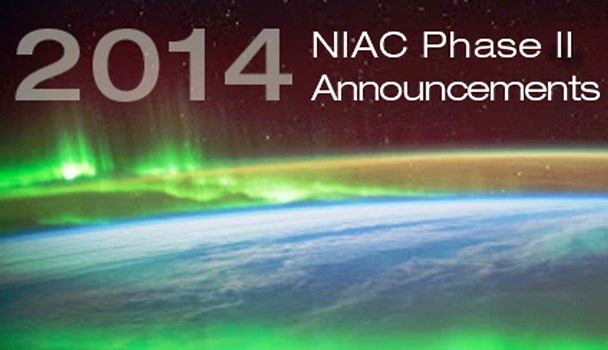 NASA’s Innovative Advanced Concepts program (NIAC ) announced on Wednesday, Aug. 6 the selection of five concept proposals for Phase II funding. The proposals were selected because of their potential to transform future space missions,  provide new capabilities,  and improve on current practices for building and operating aerospace systems.The proposals ranged from an imaging technique using “Orbital Rainbows”  of dust-like particles, to hybrid spacecraft/rovers that roll across an asteroid’s surface. The selected proposers will receive up to $500,000 for two years to further develop their concepts. “Technology drives our futures in exploration, science and commercial space; and investments in these advanced concepts must be made to ensure we will have the spectrum of capabilities for the near term and well into the 21st century,” said Michael Gazarik, associate administrator for Space Technology. “NASA’s Space Technology Mission Directorate is creating the technologies needed for today, while also investing in the concepts that will become technological realities of tomorrow. These concepts, anchored to sound science, but rich in ‘what if’ creativity, will make our science, exploration and commercial space futures possible.”

The five proposals selected for Phase II of the NIAC program are:

A concept for a 10-meter sub-orbital, large balloon reflector that could be used as a telescope inside a large high-altitude balloon. The concept would use part of the balloon itself as a reflector for the telescope. The principal investigator is Christopher Walker of the University of Arizona.

A spacecraft/rover hybrid for the exploration of small solar system bodies, such as asteroids or small moons. The hybrids, ranging in size from a centimeter to a meter, would be deployed from a “mothership” spacecraft and use spinning flywheels to tumble and hop across the surface of an asteroid or other small solar system body. The principal investigator is Marco Pavone of Stanford University in California. A concept for deep mapping of small solar system bodies using subatomic particles to map small surface features and the interior. This technique could be used to gather data about potential resources on asteroids that could be mined and used by future explorers. The principal investigator for this study is T.H. Prettyman of the Planetary Science Institute in Tucson, Arizona.

Another concept for a low-mass planar photonic imaging sensorthat could replace bulkier tradition telescopes. This concept may provide a lower-cost method for providing high-resolution imaging capabilities for outer planet missions. The principle investigator is S.J. Ben Yoo at the University of California, Davis.

“Orbiting Rainbows”, an imaging concept that would use an orbiting cloud of dust-like material that function as the primary element for a giant space aperture, the space through which light passes during an optical measurement, that could be used to image distant astronomical objects at extremely high resolution. The principle investigator is Marco Quadrelli of NASA’s Jet Propulsion Laboratory (JPL) in Pasadena, California.

The projects were chosen by NASA through a peer-review process that evaluated the concepts on the basis of innovation and technical feasibility. All of the concept are in the early stages of development, most are 10 years or more away from use on a NASA mission.

“This was an extremely competitive year for NIAC Phase II candidates,” said Jay Falker, NIAC program executive at NASA Headquarters. “But the independent peer review process helped identify those that could be the most transformative, with outstanding potential for future science and exploration.”