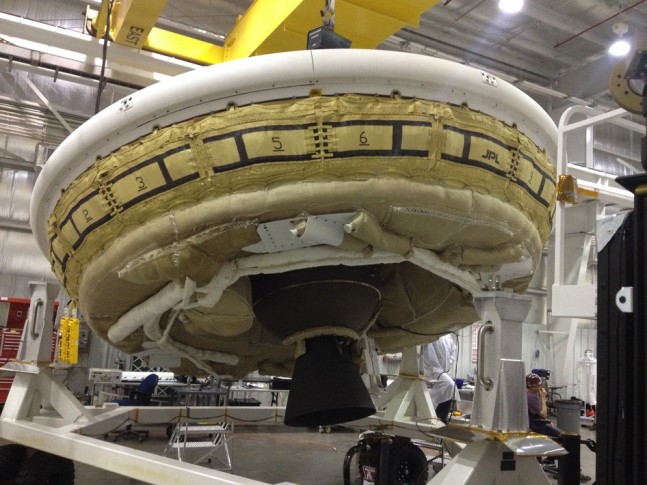 NASA has developed a new, innovative vehicle capable of landing larger payloads in environments such as the thin Martian atmosphere. The Low-Density Supersonic Decelerator (LDSD) is a saucer-shaped, rocket-powered vehicle is now complete and ready for testing at the U.S. Navy’s Pacific Missile Range Facility in Kauai, Hawaii. NASA’s LDSD completes a Range Compatibility Test where radio frequencies interfaces between the vehicle, its balloon carrier and the missile range were tested. Photo Credit: NASA

This first experimental flight test will record the performance of new, breakthrough technologies, beneficial to the success of future Mars missions and even for human exploration. The vehicle was constructed at NASA’s Jet Propulsion Laboratory (JPL) in Pasadena, California and assembled and prepped in Kauai.  Over the past three weeks, the vehicle has undergone a series of tests in order to ensure it will be ready for the test flight.

“Our Supersonic Flight Dynamics Test Vehicle number 1 arrived at the Navy’s Pacific Missile Range Facility on April 17,” said Mark Adler, LDSD project manager. “Since then, we have been preparing it for flight. One of the last big assemblies occurred on April 30, when we mated the vehicle with its Star-48 booster rocket.”

During the initial test flight, a large, Helium-filled balloon will be used to elevate the test vehicle from the facility up to an altitude of 120,000 feet, where it will free fall for a fraction of a second before its four rocket motors will gyroscopically stabilize the vehicle. After about a half of a second, the Star48B long-nozzle engine will ignite and send the vehicle shooting up to 180,000 feet (edge of the stratosphere) at speeds up to Mach 4. At this point in the flight, the saucer will perform a series of automated tests, and as the craft slows to Mach 3.8, the first of two new atmospheric braking system technologies will be deployed.

“Our goal is to get to an altitude and velocity which simulates the kind of environment one of our vehicles would encounter when it would fly in the Martian atmosphere,” said Ian Clark, principal investigator of the LDSD project at JPL. “We top out at about 180,000 feet and Mach 4. Then, as we slow down to Mach 3.8, we deploy the first of two new atmospheric braking systems.”

As we move toward our goal of humans traveling to Mars, it is important to have the technologies in place to land larger payloads on the red planet. Technology, like the LDSD, will ensure we are able to deliver necessary supplies and materials required for long-duration missions to Mars and beyond. “After years of imagination, engineering and hard work, we soon will get to see our Keiki o ka honua, our ‘boy from Earth,’ show us its stuff,” Adler said. “The success of this experimental test flight will be measured by the success of the test vehicle to launch and fly its flight profile as advertised. If our flying saucer hits its speed and altitude targets, it will be a great day.” NASA gets their inspiration for vehicle design from everywhere – including nature. The LDSD design based in part on the pufferfish. Image Credit: Chris Laughlin

NASA has six potential launch dates for this test flight, beginning today June 3, with a launch window of 7 to 8:30a.m. Hawaiian Standard Time (1 to 2:30 p.m. EDT and 10 to 11:30 a.m. PDT). Proper wind condition are required for launch and yesterday’s attempt as well as the attempt on the 3rd have been scrubbed. The other potential launch dates are June 7, 9, 11 and 14 with the same time window.

The test flight will be broadcast live on NASA TV as the test is relayed from the vehicle to the ground. The craft is equipped with several on board cameras including a couple Go Pro cameras. The video from the saucer will show it dropping away from its high-altitude balloon, then shooting up to the top of the stratosphere. The vehicle will then deploy its Supersonic Inflatable Aerodynamic Decelerator (SIAD), an inflatable Kevlar tube. As the SIAD inflates, a gigantic parachute, the Supersonic Disk Sail Parachute, will be deployed.

This first test flight is not guaranteed to be a success, but if the motor fires and the team receives data, it will be a great day regardless of the outcome.

“We are pushing the envelope on what we know,” said Clark. “We are accepting higher risk with these test flights than we would with a space mission, such as the Mars Science Laboratory. We will learn a great deal even if these tests, conducted here in Earth’s atmosphere at relatively low cost, fail to meet some of the mission objectives.”