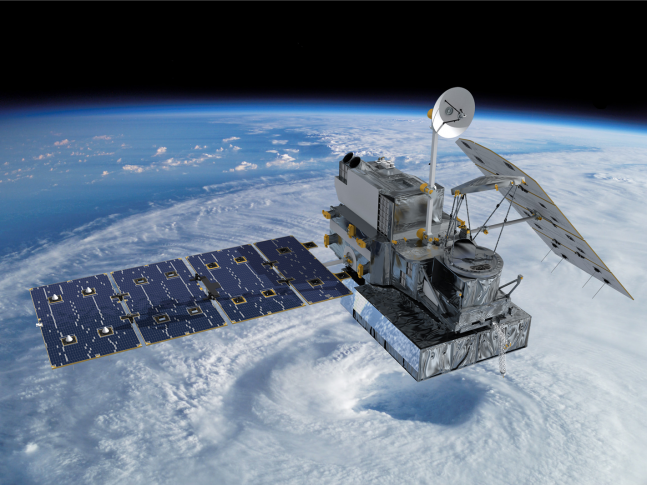 With weather and environmental concerns foremost in mind, NASA and the Japanese Aerospace Exploration Agency (JAXA) have announced that on Thursday February 27, between 1:07 p.m. to 3:07 p.m. EST (3:07 a.m. to 5:07 a.m. JST Friday, Feb. 28) they will launch the Global Precipitation Measurement (GPM) Core Observatory satellite. Launch will take place from JAXA’s Tanegashima Space Center in Japan. The launch vehicle for this international mission will be JAXA’s H-IIA rocket.

The Core Observatory satellite will help to observe worldwide precipitation (rain and snowfall) rates several times per day. This should help meteorologists to better understand how Earth’s hydrological cycle works. Data gleaned from Core Observatory will also help to calibrate international satellites which are used to determine rain and snow amounts around the globe. The Core Observatory satellite will employ an array of highly-sensitive instruments to help it to accomplish its mission. Two of these, the GPM Microwave Imager which was built by Ball Aerospace and Technology Corp., and the Dual-frequency Precipitation Radar, developed by JAXA with the National Institute of Information and Communication Technology in Tokyo. These instruments will monitor precipitation through a variety of means and will be able to confirm the size and distribution of rain and snowfall.

The Core Observatory will add its strength to the other members of the GPM, these include spacecraft that are jointly operated by NASA as well as the National Oceanic and Atmospheric Administration (NOAA). It will add its strength to the other GPM satellites already on orbit. These include the Suomi National Polar-orbiting Partnership mission, launched in 2012; and the NASA-JAXA Tropical Rainfall Measuring Mission (TRMM), which was delivered to orbit in 1997. There are other satellites that are a part of the network as well.

The GPM fleet is jointly managed by an array of agencies including NASA, JAXA, NOAA, the Department of Defense, the European Organization for the Exploitation of Meteorological Satellites, the Centre National D’Etudies Spatiales of France and the Indian Space Research Organization.

“We will use data from the GPM mission not only for Earth science research but to improve weather forecasting and respond to meteorological disasters,” said Shizuo Yamamoto, JAXA’s executive director. “We would also like to aid other countries in the Asian region suffering from flood disasters by providing data for flood alert systems. Our dual-frequency precipitation radar, developed with unique Japanese technologies, plays a central role in the GPM mission.”