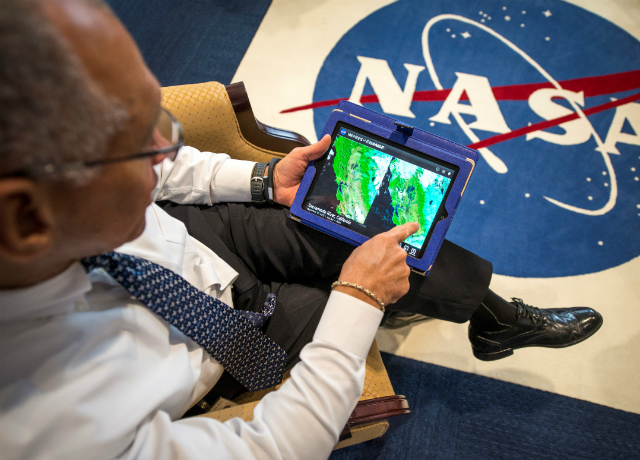 NASA Administrator Charles Bolden explores "Images of Change," a NASA application that allows users to view "before and after" images of the impact of human activities, a changing climate and natural disasters on Earth, Monday, Dec. 2, 2013, at NASA Headquarters in Washington. The application is available free for iOS devices. More images can be found at http://climate.nasa.gov Photo Credit: NASA/Bill Ingalls

Human activities, a changing climate and natural disasters are rapidly altering the face of our planet. Now, with NASA’s Images of Change iPad application, users can get an interactive before-and-after view of these changes.

The app presents sets of images of places around the world that have changed dramatically. Some of these locations have suffered a disaster, such as a fire or tsunami, or illustrate the effects of human activities, such as dam building or urban growth. Others document impacts of climate change such as persistent drought and rapidly receding glaciers.

“Images of Change gives users an astronaut’s or Earth explorer’s view of the changes occurring on our planet and demonstrates the important role NASA plays in contributing to the long-term understanding of Earth,” said John Grunsfeld, NASA’s associate administrator for science in Washington. “By utilizing ground-based and space-based observation systems, we are able to better understand how humans are contributing to a changing world.”

Viewers can look at the images side-by-side or overlay them using a slider bar to travel from past to present. Each image pair includes background information on what the viewer is seeing and its location on a map.

“The Images of Change gallery is one of the more popular parts of the Global Climate Change website,” said Amber Jenkins, editor of the website at NASA’s Jet Propulsion Laboratory in Pasadena, Calif. “The gallery project, which began in 2009, helps people see just how our planet is changing over days, months, years and centuries. Seeing is believing, and the perspective we get from space helps us step back and see Earth as a whole.”

The Images of Change iPad app is available as a free download at: http://go.nasa.gov/1bE3osn