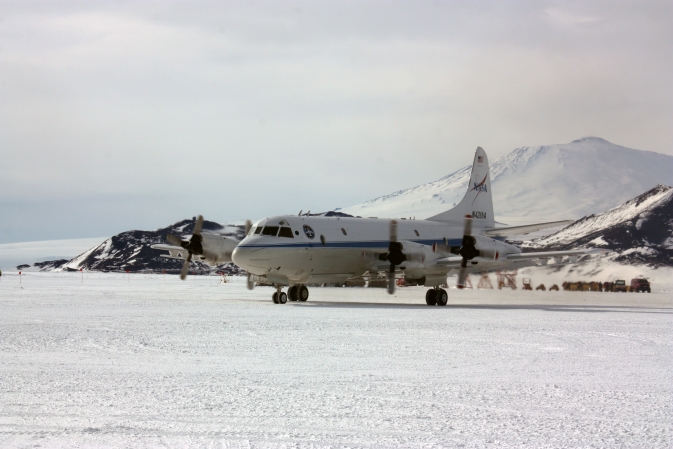 NASA’s Operation IceBridge has begun its 2013 Antarctic field campaign with the arrival of the agency’s aircraft and scientists at the National Science Foundation’s McMurdo Station in Antarctica.

The IceBridge mission will conduct daily survey flights through Nov. 26 on a NASA P-3 research aircraft from a base of operations at McMurdo Station. The P-3 usually is based at the agency’s Wallops Flight Facility in Virginia. As part of a multi-year project, researchers are collecting data on Antarctic land and sea ice. Previous IceBridge Antarctic missions was conducted out of Punta Arenas, Chile.

“Flying from Antarctica will allow us to survey areas that had been unreachable from Chile,” said Michael Studinger, IceBridge project scientist at NASA’s Goddard Space Flight Center in Greenbelt, Md. “There are many scientifically important areas we can now reach from McMurdo.”

In 2009, NASA’s ice-monitoring satellite, the Ice, Cloud and Land Elevation Satellite (ICESat) reached the end of its life and stopped collecting data. IceBridge was started the same year and will keep an eye on changing polar ice until NASA launches the ICESat successor (ICESat-2) in three years.

IceBridge also plans to fly over areas of sea ice in and around the Ross Sea where there have been no airborne ice thickness measurements. The scientists also will survey beneath the Ross Ice Shelf using a gravimeter, an instrument that can detect minute changes in gravitational fields below the aircraft. These small changes help researchers determine the depth and shape of water cavities beneath floating ice.

Mission planners worked with the National Science Foundation and the U.S.  Antarctic Program for more than a year laying the groundwork for this campaign. The IceBridge project science office is located at Goddard.