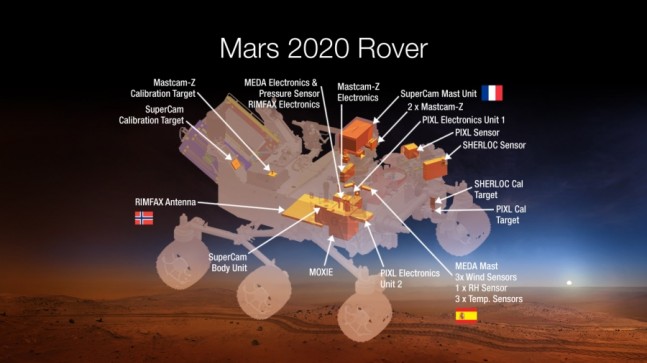 Artist's concept of where the seven selected instruments will be placed on the Mars 2020 rover. Image Credit: NASA

NASA announced on Thursday, July 31, the selection of seven instruments that will be carried on the Mars 2020 rover mission. The instruments were chosen out of 58 proposals that NASA received in January, nearly twice the number of responses submitted for similar instrument competitions in the recent past. The selected proposers will receive a total of approximately $130 million to develop the instruments. The winning proposals came from researchers in the United States, France, Spain, and Norway.

The rover for the Mars 2020 mission will be based on the design of the Curiosity rover currently operating on Mars. The new rover will also use the Sky Crane of landing system that successfully set Curiosity down on the surface of Mars nearly two years ago. Artist’s concept of the sensor head of the Planetary Instrument for X-RAY Lithochemistry, or PIXL. PIXL is an X-ray fluorescence spectrometer that will also contain an imager with high resolution to determine the fine-scale elemental composition of Martian surface materials. (Click to enlarge) Image Credit: NASA/JPL

The new rover’s upgraded hardware and new instruments will allow it to conduct a geological assessment of its landing site, determine the potential habitability of the environment, and directly search for evidence of ancient Martian life.

“Today we take another important step on our journey to Mars,” said NASA Administrator Charles Bolden.” While getting to and landing on Mars is hard, Curiosity was an iconic example of how our robotic scientific explorers are paving the way for humans to pioneer Mars and beyond. Mars exploration will be this generation’s legacy, and the Mars 2020 rover will be another critical step on humans’ journey to the Red Planet.”

The selected instruments are the following:

Researchers will use the Mars 2020 rover to identify, select and collect soil  and rock core samples that will be stored for a possible sample return mission in the future. Returning Martian geological samples to Earth for analysis is one of the scientific objectives outlined by the National Research council’s 2011 Planetary Science Decadal Survey.

The Mars 2020 may also help advance knowledge of conditions future human explorers will face on Mars and how they can use natural resources available on the planet’s surface.  The oxygen extracting technology of the MOXIE experiment could be up-scaled to produce breathable oxygen for future astronauts or oxidizer for rocket fuel.

“The 2020 rover will help answer questions about the Martian environment that astronauts will face and test technologies they need before landing on, exploring and returning from the Red Planet,” said William Gerstenmaier, associate administrator for the Human Exploration and Operations Mission Directorate at NASA Headquarters in Washington. “Mars has resources needed to help sustain life, which can reduce the amount of supplies that human missions will need to carry. Better understanding the Martian dust and weather will be valuable data for planning human Mars missions. Testing ways to extract these resources and understand the environment will help make the pioneering of Mars feasible.” NASA has stated with increasing frequency that it is focused on the exploration of Mars. Image Credit: NASA