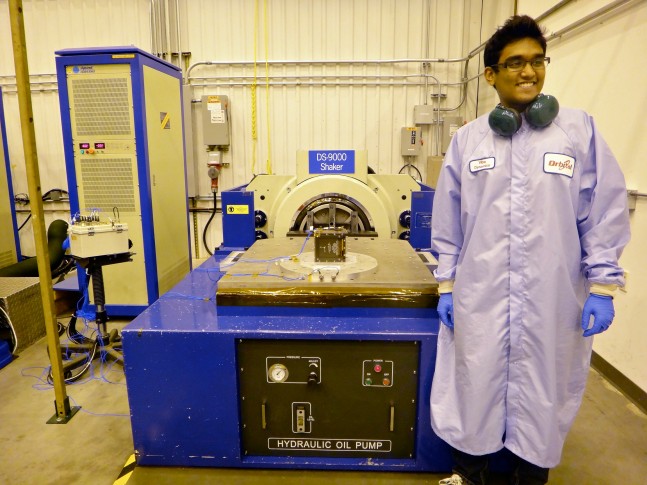 Rohan Punnoose beams next to TJ3Sat, a the first CubeSat to be built by high school students and launched into space through NASA's ELaNA program. Image Credit: Thomas Jefferson High School

NASA Administrator Charles Bolden will visit a suburban Washington school on Friday, Dec. 20 where high school students built a small satellite that was launched into space in November.

Media are invited to attend the tour of the lab where the satellite, TJ3Sat, was made at Thomas Jefferson High School for Science and Technology in Alexandria, Va., from 2 to 3 p.m. EST.

TJ3Sat is a cubesat — a class of research spacecraft called nanosatellites, which measure approximately four inches long, have a volume of about one quart and weigh about three pounds. TJ3Sat contains a voice synthesizer module that will take written phrases in the form of code and produce a phonetic voice reading on the satellite’s downlink frequencies. TJ3Sat is the first NASA-sponsored cubesat developed by high school students.

As part of NASA’s CubeSat Launch Initiative, TJ3Sat launched along with 10 other cubesats Nov. 19 aboard a U.S. Air Force Minotaur 1 rocket from the Mid-Atlantic Regional Spaceport at NASA’s Wallops Flight Facility, Va. The cubesats, NASA’s fourth Educational Launch of Nanosatellite (ELaNa) mission, deployed from their protective cases into Earth’s orbit about 20 minutes after liftoff.

Media interested in attending the tour in person should contact the Fairfax County Public Schools Department of Communications and Community Outreach at 571-423-1200.