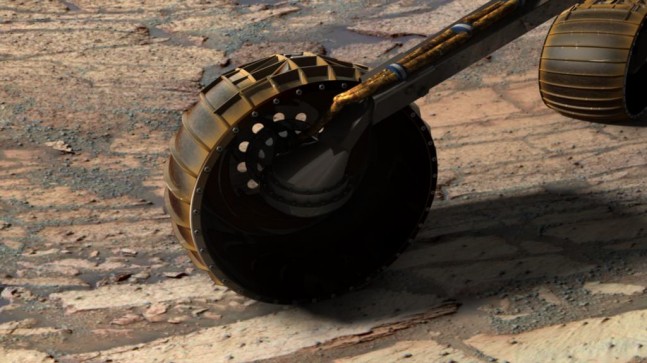 NASA is celebrating the Mars Exploration Rover Opportunity's tenth year on the surface of the Red Planet. An anniversary made all the more incredible given the fact that the rover was only scheduled to last 90 days. Image Credit: NASA / JPL / Caltech

The Mars Exploration Rover, Opportunity, continues its mission of exploration, far past its given warrantee as it makes new scientific discoveries, 10 years after its mission on the Red Planet began. Its most recent findings involve the confirmation of a more milder environment on ancient Mars found in older rock samples that contain higher levels of water when compared to oxidized and acidic rock samples that were examined before.

“These rocks are older than any we examined earlier in the mission, and they reveal more favorable conditions for life than any evidence previously examined by investigations with Opportunity,” said Opportunity’s Deputy Principal Investigator, Ray Arvidson, in a statement released by NASA. This new evidence was revealed thanks to the help of NASA’s Mars Reconnaissance Orbiter (MRO) with arrived in orbit around the Red Planet in 2006. This orbiting satellite used its Compact Reconnaissance Imaging Spectrometer (CRISM) to look for iron-rich clay material at the Matijevic Hill region located on the rim of Endeavor Crater. This area is believed to have been formed around four billion years ago. Opportunity studied the formation of the massive crater by comparing its structure in relation to nearby formations of rock.

This is just the latest in a series of revelations from a mission that has gone well beyond the three months of service initially expected for Opportunity. Working in a close collaboration with MRO, Opportunity and the Curiosity Mars Science Laboratory rover are helping to make important discoveries to aid manned missions to Mars planned in the coming decades. With ten years of discoveries behind it, it is unclear what the next decade will hold for Opportunity. Photo Credit: NASA

“The more we explore Mars, the more interesting it becomes. These latest findings present yet another kind of gift that just happens to coincide with Opportunity’s 10th anniversary on Mars,” said Michael Meyer, lead scientist for NASA’s Mars Exploration Program in a statement released by NASA. “We’re finding more places where Mars reveals a warmer and wetter planet in its history. This gives us greater incentive to continue seeking evidence of past life on Mars.”

To date, no mission to the fourth planet from our Sun has detected any proof that Mars was ever inhabited, only that it was capable of supporting life in the distant past. Unlike the Earth, Mars didn’t have the ability to keep a liquid iron core that forms a protective barrier known as the magnetosphere. Without this protection, radioactive particles from the Sun known as the “solar wind” prevented Mars from forming an effective atmosphere allowing for oxygen and water to both form and stay in place. For those who have been involved with the Mars Exploration Rover project since its inception, while the past ten years have been historic, what awaits the golf-car sized robot is just as exciting.

“We’re looking at the legacy of Opportunity’s first decade this week, but there’s more good stuff ahead,” said Steve Squyres of Cornell University, Ithaca, N.Y., the mission’s principal investigator in a statement released by NASA. “We are examining a rock right in front of the rover that is unlike anything we’ve seen before. Mars keeps surprising us, just like in the very first week of the mission.”