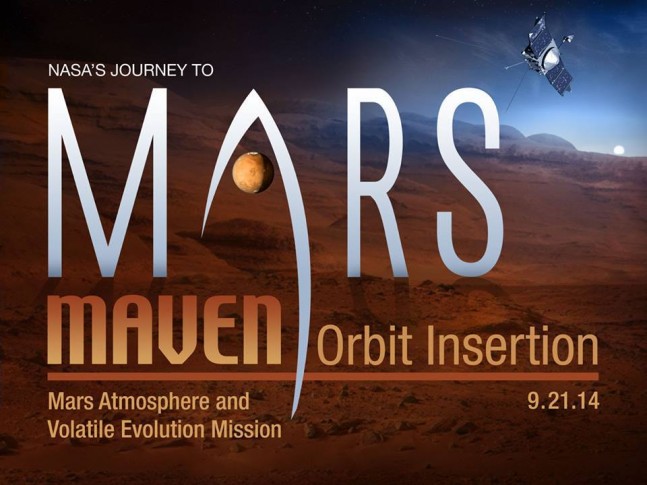 As of 10:24 p.m. EDT (0224 GMT) on September 21, the Martian neighborhood received its newest “inhabitant”. NASA’s Mars Atmosphere and Volatile EvolutioN (MAVEN) spacecraft is now officially in orbit around the red planet. In the coming weeks, MAVEN will prepare its systems to start taking science measurements in an effort to study Mars’ upper atmosphere. MAVEN is the first satellite dedicated to studying the upper atmosphere of Mars. In addition to its science mission, MAVEN will also communicate with rovers on the Martian surface by using its Electra UHF Transceiver. Photo Credit: NASA/JPL-Caltech

“As the first orbiter dedicated to studying Mars’ upper atmosphere, MAVEN will greatly improve our understanding of the history of the Martian atmosphere, how the climate has changed over time, and how that has influenced the evolution of the surface and the potential habitability of the planet,” said NASA Administrator Charles Bolden. “It also will better inform a future mission to send humans to the Red Planet in the 2030s.”

MAVEN first launch from Cape Canaveral’s Space Launch Complex 41 (SLC-41) atop a United Launch Alliance (ULA) Atlas V rocket. The spacecraft crossed 442 million miles over a ten-month journey and completed a roughly 33-minute burn to slow the spacecraft down and make a successful transition from a heliocentric orbit to a Mars-centric orbit.

“NASA has a long history of scientific discovery at Mars and the safe arrival of MAVEN opens another chapter,” said John Grunsfeld, astronaut and associate administrator of the NASA Science Mission Directorate at the agency’s Headquarters in Washington. “Maven will complement NASA’s other Martian robotic explorers—and those of our partners around the globe—to answer some fundamental questions about Mars and life beyond Earth.”

Bruce Jakosky, MAVEN principal investigator with the Laboratory for Atmospheric and Space Physics at the University of Colorado, Boulder (CU/LASP), said “It’s taken 11 years from the original concept for MAVEN to now having a spacecraft in orbit at Mars. I’m delighted to be here safely and successfully, and looking forward to starting our science mission.” It was all smiles in Lockheed Martin’s space systems mission control as the orbital insertion confirmation was received. MAVEN was built by Lockheed Martin and is the first orbiter designed to solely study the upper atmosphere and will hopefully answer the question of what happened to Mar’s atmosphere. Currently, the Martian atmosphere is 1 percent of the atmosphere we have on Earth. It is important to have the full picture of the history of the Martian environment and determine what processes caused the atmosphere to change.

Lockheed Martin vice president and general manager, Jim Crocker said, “This is an immense achievement for NASA and all the MAVEN partner organizations. MAVEN has performed exceptionally well since launch and the flawless orbital insertion is testimony to how well the teams worked together throughout the entire program. NASA now has another healthy orbiter around Mars.”

Over the next six weeks, MAVEN will commence a commissioning phase, which includes maneuvering into the vehicle’s final science orbit, testing and calibrating the science instruments, and science-mapping commands. After this initial six week period, MAVEN will be able to begin its scheduled primary one Earth-year mission, where it will take measurements of the composition structure and escape gases in the Martian upper atmosphere, and its interaction with the Sun and solar winds. MAVEN’s primary mission covers five “deep-dip” campaigns, where the spacecraft’s lowest orbit altitude will “dip” from 93 miles (150 kilometers) to around 77 miles (125 kilometers). This will allow MAVEN’s instruments to record data from the region where the upper and lower atmospheres meet, providing a full picture of the upper atmosphere.

“This was a very big day for MAVEN,” said David Mitchell, MAVEN project manager from NASA’s Goddard Space Flight Center, Greenbelt, Maryland.  “We’re very excited to join the constellation of spacecraft in orbit at Mars and on the surface of the Red Planet.  The commissioning phase will keep the operations team busy for the next six weeks, and then we’ll begin, at last, the science phase of the mission.  Congratulations to the team for a job well done today.” Jakosky added, “MAVEN is a science mission and we are really excited for what it can do. We make fundamental discoveries each time we go to Mars, and with the help of MAVEN, we will be able to put together the whole story of what happened to Mars’ atmosphere.”

Lisa May, lead program executive, Mars Exploration Program, NASA headquarters, described the mission as one of discovery and equated MAVEN with a detective that will help us solve many of Mars’ mysteries. She stated,”This is a mission of discovery and we are excited to keep turning pages in the mystery novel that is Mars.”

MAVEN carries with it three instrument packages. The Particles and Fields Package, built by the University of California at Berkeley with support from CU/LASP and Goddard contains six instruments that will characterize the solar wind and the ionosphere of the planet. The Remote Sensing Package, built by CU/LASP, will identify characteristics present throughout the upper atmosphere and ionosphere. The Neutral Gas and Ion Mass Spectrometer, provided by Goddard, will measure the composition and isotopes of atomic particles.

MAVEN’s principal investigator is based at CU/LASP. The university provided two science instruments and leads science operations, as well as education and public outreach, for the mission. The University of California at Berkeley’s Space Sciences Laboratory also provided four science instruments for the mission. Goddard manages the MAVEN project. Lockheed Martin built the spacecraft and is responsible for mission operations. JPL provides navigation and Deep Space Network support, as well as Electra telecommunications relay hardware and operations.