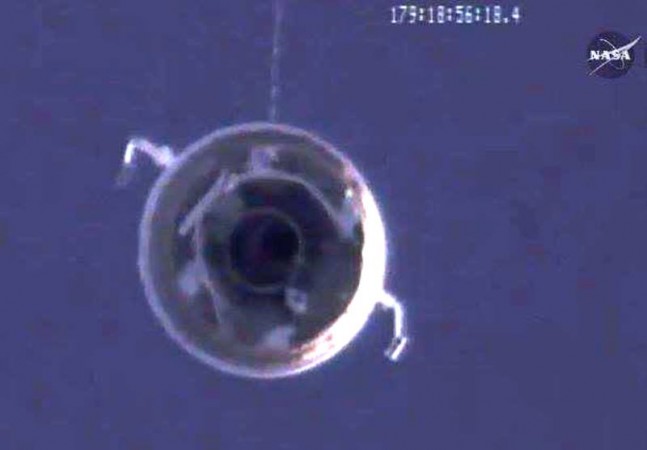 NASA carried out the test flight of the Low-Density Supersonic Decelerator (LDSD) on Saturday June 28. However, everything did not go exactly as planned. Image Credit: NASA TV

LDSD is testing new technologies in preparation for future NASA missions to Mars, and requires more than wind tunnel tests in order to be fully developed. This vehicle uses the largest supersonic parachute ever deployed, and needs to be flown at high speeds and in an atmosphere similar to Mars which is only one percent as dense as Earth’s atmosphere (the Martian atmosphere is actually less than one percent of Earth’s and is comprised primarily of carbon dioxide). NASA has done extensive research into this technology and plans on using it for upcoming missions to Mars. Photo Credit: NASA

To achieve this, LDSD was lifted for several hours into the upper atmosphere to a height of approximately 120,000 feet (36,600 meters) by a large helium balloon. After this height was successfully reached LDSD was dropped from the balloon and a Star-48 solid rocket booster fired LDSD to an altitude of about 180,000 feet (54,900 meters) accelerating it to speeds of Mach 4 or 3,040 miles per hour.

Achieving this high altitude and supersonic flight were the primary mission objectives for this phase of the project. According to NASA – both were achieved successfully. In addition, this test added the deployment of two air-braking systems, the Supersonic Inflatable Aerodynamic Decelerator (SIAD) and Supersonic Disk Sail Parachute.

Though the donut-shaped inflatable, SIAD, deployed correctly, there was apparently a problem with the mammoth parachute designed to carry LDSD to a safe water landing. The latest update from NASA says the vehicle has landed in the Pacific Ocean off of Hawaii, but it’s unclear if damage occurred as a result of the malfunctioning parachute.

These two breaking elements are not officially going to be tested until next year, but will still provide valuable data to engineers, that will determine their effectiveness and fix issues that may have occurred during this test.

LDSD’s overall goal is testing technologies that will land future robotic and manned missions on Mars. These missions will have heavier payloads and other elements that current planetary landing-technology can’t handle. NASA has been landing on Mars since the Viking Program in 1976, and most recently completed an ambitious Mars landing known as the “seven minutes of terror” for the Mars Science Laboratory rover Curiosity in 2012. NASA has had to deal with these seven minutes since it began landing rovers on the surface of the Red Planet since the 1990s. More information will be provided to the media about today’s test flight during a teleconference tomorrow. Stay connected with spaceflightinsider.com for more updates on the LDSD project.

Now this is “transparency”. Success or failure, NASA will provide the information.