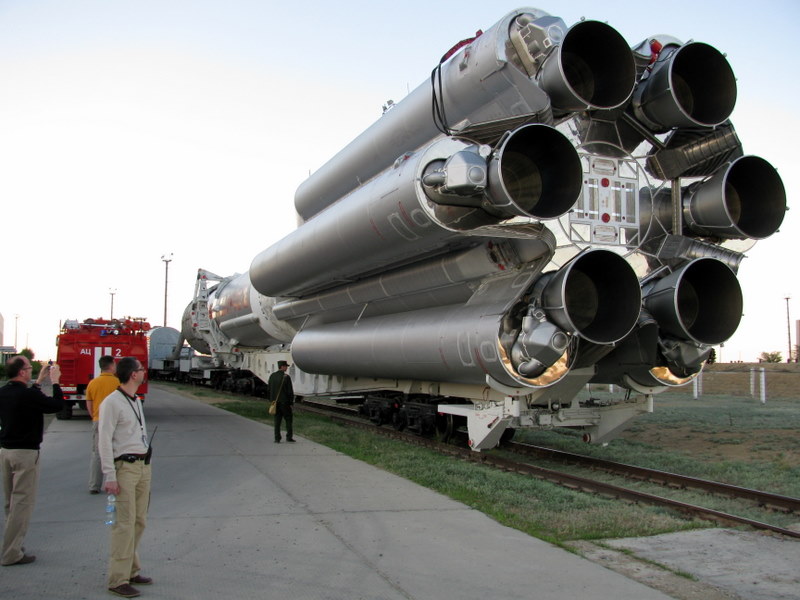 The planned launch of a Proton rocket from the Baikonur Cosmodrone has been delayed by at least 24 hours. Photo Credit: Alexpgp

The launch of a Proton Breeze M rocket with the Sirius FM-6 satellite, which was scheduled to take place today, has been postponed for at least 24 hours. The delay was caused by issues revolving around the satellite ground station network required for the launch and early orbital operations of the Sirius spacecraft. Khrunichev State Research and Production Space Center and International Launch Services (ILS) have announced plans they will try again at 12:12 a.m. local time on October 22 in Baikonur (2:12 pm EDT on October 21). **The launch date has been pushed back to no earlier than Oct. 25.**

Both the Proton Briz-M launch vehicle and the Sirius FM-6 satellite have been placed in a safe configuration.

This is the latest delay for this mission, which had been slated to launch on August 14. That launch date was pushed back due to a July 2, 2013 failure which saw another Proton rocket and its payload of three Russian GLONASS (Global Navigation Satellite System) satellites destroyed in an fireball on the Kazakhstan steppes.

Tomorrow’s planned flight will not be the first post-accident Proton launch. On September 29, Proton returned to service with the delivery of the Astra 2E satellite to geosynchronous orbit.

Stay tuned to SpaceFlight Insider for more updates on this mission.