ISON vs. Kohoutek, “Comet of the Century” 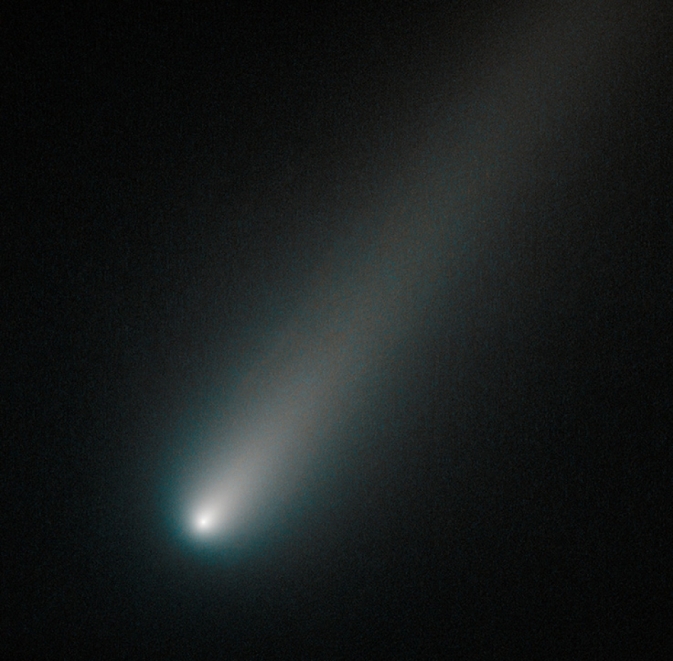 Comet ISON streams through space in this image captured on Oct 9, 2013, by the Hubble Space Telescope. The NASA-funded FORTIS sounding rocket will launch in mid-November to join the dozens of observatories studying the comet. Image Credit: NASA/Hubble

Today, NASA released this stunning Hubble photo of Comet ISON, showing its nucleus fully intact. Its form is looking good as it heads closer to us, with its closest pass by our Sun on November 28. So far, there are no signs of the nucleus fragmenting or disintegrating. Time will tell how spectacular ISON’s show will be. This color photograph of the comet Kohoutek (C/1973 E1) was taken by members of the lunar and planetary laboratory photographic team from the University of Arizona, at the Catalina observatory with a 35mm camera on January 11, 1974. Credit: NASA Johnson Space Center (NASA-JSC)

40 years ago comet mania swept the nation. Astronomers spotted a new comet with tremendous potential to dazzle stargazers in their back yards. The comet was massive. It was going to go really close to the Sun. It was going to be startlingly bright to the naked eye. Its tail would stretch across the sky. It was destined to shine best on Christmas. In short, this was expected to be brighter than any comet anyone could remember. It was heralded the “Comet of the Century.” Tall tales of the potentially historic cometary tail created an unequalled public interest in astronomy. When this comet, Comet Kohoutek, was discovered in 1973 it became a cultural as well as celestial phenomenon.

But by New Year’s Day 1974, when the comet headed back out to the depths of the solar system, not to be seen again in these parts for millennia, Kohoutek was the biggest astronomical letdown in history. With a mediocre brightness and a measly tail, the comet failed to live up to the extraordinary hype. The most famous comet to the general public is Halley’s Comet. The most infamous comet to astronomers is Comet Kohoutek. Professor Lobos Kohoutek, Czech-born astronomer who discovered the comet named after him, briefs the news media on what they might expect to see when the comet makes its closest approach to Earth on January 5, 1974. Image Credit: NASA

I interviewed Lubos Kohoutek, the discoverer of the infamous comet, last year. “It was not simple to explain that this comet might not be a bright object,” Lubos Kohoutek said. “We warned reporters in all our interviews of too high expectations, but without great success.” He also liked neither “Comet of the Century” nor the “Flop of the Century” titles for his comet. He later joked, “Any titles were given way too early because ¼ of the century was still not known.”

Astronomers had an excellent grasp on the comet’s trajectory and fully understood the gravitational forces acting on the comet. However they were completely in the dark when dealing with two Earthly forces that mattered in the end: the media and public opinion. Ever since Comet Kohoutek, astronomers are more careful with what they say to the media. Whenever a potentially bright comet comes into view, astronomers are cautious to speculate. They never state definitively what a comet will look like. They always say, “this comet may be a good one,” or “this comet may brighten nicely next year,” but they never go on record saying what a comet will do. In fact, the entire Kohoutek episode has left astronomers decidedly pessimistic about the future brightness of comets. “Remember Kohoutek,” they say before getting too excited.

This bust of a comet to the backyard astronomer, however, turned out to be a gold mine to planetary scientists. Observing it from land, air and space – in visible light, ultraviolet, and radio waves – astronomers unlocked secrets of this icy visitor.

A COMET FROM SKYLAB
Commander Jerry Carr, Pilot Bill Pogue, and Science Pilot Ed Gibson had the most enviable position to view Comet Kohoutek. They were aboard the first U.S. space station, Skylab. Capsule Communications in Houston radioed the crew on November 30, 1973 to ask how the comet looked. When told that the comet should be magnitude 5, and visible to the naked eye, William Pogue responded, “My naked eye must have a few clothes on it.” For the next two weeks they could only see the comet with binoculars, but it got better. On December 13 Pogue finally reported success, “Kohoutek has a really significant tail now.” On Christmas Day, Carr and Gibson observed the comet in new detail during a spacewalk. The comet was so bright that Gibson could even see Kohoutek through one of the darkened protective visors on his helmet. “It was essentially dividing into three different sections,” Gibson commented. “The coma, which we’d seen before; the tail, which now was quite a bit wider and quite a bit more intense than we’ve seen before… and then there was a spike, which was going straight forward and it was heading for the Sun.” This sunward spike, or antitail, had never been witnessed before and the astronauts debated if it was real or an illusion.

MEDIA LESSON
Kohoutek also taught astronomers a different powerful lesson closer to home: how to deal with the media. We see this today with another potential “Comet of the Century” approaching us. Comet ISON is coming our way around Thanksgiving and it bears eerie similarities to Kohoutek. It’s big. It’s going really close to the Sun. It probably hasn’t traveled this way often. It could be good. It could be great. But it also could be another dud.

This time when the “Comet of the Century” label was added to ISON, every astronomer I know downplayed it. They remember Kohoutek. It would be better to let the comet sneak up on us and if it turns out to be good, then and only then alert the media. There’s no need to build up unnecessarily high expectations in the public. After all, when Kohoutek fizzled, astronomers became the butt of jokes and the public called for their heads. So for ISON, let’s ignore it until November. If we talk about it too much, we might scare it away. Keep your expectations low. Watch the skies. And hopefully we will all be pleasantly surprised.

This article appears on Star Talk Radio as a  guest post from Dean Regas, co-host of the PBS program, Star Gazers, and the Outreach Astronomer at the Cincinnati Observatory, which is a member of StarTalk’s Cosmic Community. (f you want to reach Dean, you can email him at dean@cincinnatiobservatory.org). The original post can be viewed here: “Comet of the Century“