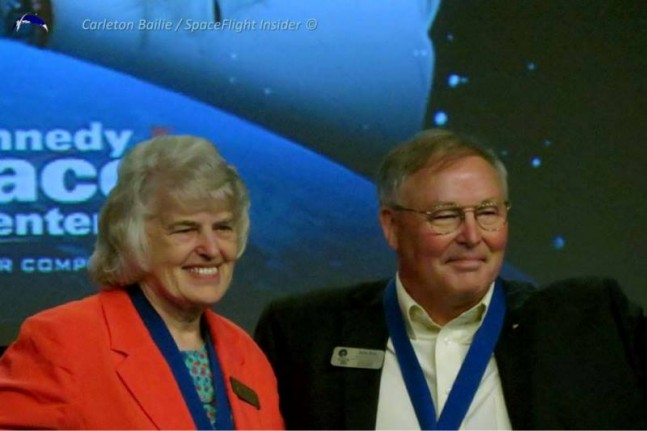 CAPE CANAVERAL, Fla. — Rainy weather could not dampen spirits at NASA’s Kennedy Space Center during the 2014 Astronaut Hall of Fame Inductions. Yesterday, a crowd gathered underneath the Space Shuttle Atlantis to honor two distinguished American Astronauts – Shannon Lucid and Jerry Ross. If you have had the opportunity to visit the Space Shuttle Atlantis you already know what an awe inspiring exhibit she is and understand why underneath this tremendous display was the perfect setting for this year’s inductions.

Former CNN Miami Correspondent, John Zarrella, served as the Master of Ceremonies and described the day as “not only honoring the past but also celebrating the promise of tomorrow.” Shuttle astronaut Shannon Lucid regales the media with stories of her trip to China with Ross and his mother. After her and Ross’ mother ganged up on her spaceflight colleague. Photo Credit: Laura Bluhm / SpaceFlight Insider

2014 marks the 13th class of Astronaut Hall of Fame inductees and this year is the first year the ceremony took place under the Space Shuttle Atlantis. This is especially fitting as combined, astronauts Shannon Lucid and Jerry Ross flew onboard Atlantis nine out of the orbiter’s 33 flights. Also five of Jerry’s seven missions were on Atlantis.

In order to be selected as a member for the Astronaut Hall of Fame, an inductee needs to meet certain requirements such as having made his or her flight 17 years before the induction, candidates must be U.S. citizens and a NASA-trained commander, pilot or mission specialist as well as he or she must have orbited the Earth at least one time. Candidates are also judged on their individual spaceflight accomplishments and his or her contributions to the success and future of the U.S. Space Program in other activities.

This year’s inductees were selected by a committee comprised of Hall of Fame astronauts, former NASA officials, flight directors, historians and journalists. Each member of the committee votes for five candidates and assigns points to each one – 5 points for first choice, 4 points for second choice, 3 points for third choice, 2 points for fourth choice and 1 point for fifth choice. Shannon Lucid, Ph.D., was selected by NASA in 1978 as an astronaut and has the distinction of being part of the first class of U.S. astronauts to include women. She is a veteran of five space flights and is the only female U.S. astronaut to fly on the Russian Space Station Mir. She has logged over 5,354 hours (223 days) in space and set the record for most flight hours in orbit by a female astronaut. In 2007 Lucid’s record was surpassed by now retired astronaut Sunita Williams.

Lucid launched her space career with mission STS-51G, on the Space Shuttle Discovery back on June 17, 1985. During this mission, the crew participated in biomedical experiments, deployed communication satellites and used the Remote Manipulator System (RMS) to deploy and retrieve the SPARTAN satellite.

Her next mission, STS-34, launched on October 18, 1989 aboard Atlantis with the purpose of sending the Galileo spacecraft on a mission to study Jupiter, as well as operating the Shuttle Solar Backscatter Ultraviolet Instrument (SSBUV) along with several other experiments.

For STS-58, Lucid lifted off aboard the Space Shuttle Columbia on October 18, 1993 for a 14-day mission NASA would recognize as its most successful Spacelab flight. Lucid and her crewmates conducted various medical experiments, expanded our knowledge of both human and animal physiology, and engineering tests.

When asked about Lucid, speaker and Hall of Fame member John Blaha said “Shannon is an extraordinary woman and scientist. She was made for space.” He went on to say “her entire priority is to be a loving wife, mother, and supportive grandmother. Shannon is a team player; you can count on her to help when needed. She loves to help others shine.” Lucid and Ross shortly after being inducted into the U.S. Astronaut Hall of Fame. Photo Credit: Carleton Bailie / SpaceFlight Insider

Shannon’s next great space adventure took her to Star City, Russia where she trained in the Russian facilities and was eventually transported to the Space Station Mir. Lucid spent 188 days on the station as Board Engineer 2 for the mission, Mir EO-21, focusing on life and physical sciences. She was the only female U.S. astronaut and the second American to complete a long-duration stay on Mir. She hitched a ride back to Earth on Atlantis as part of STS-79 on September 26, 1996. Aside from the ceremony, the last time Lucid saw Atlantis was during that docking.

She delighted the crowd with stories of the time spent with her Russian comrades and told of one conversation they had over dinner about childhood fears. “The Russians said their greatest fear as a child was having a nuclear bomb dropped on their village by the Americans. I told them my greatest fear was having the Russians drop a bomb on my village [hometown] in Oklahoma.” Lucid expressed her thanks to all those who made her career possible. Photo Credit: Jason Rhian / SpaceFlight Insider

Shannon attributes her success to many people, like her husband and children for their unwavering support, the United States for deciding to explore space and creating the space program, and the science fiction writers of the 1940s and 1950s for how they inspired people and continue to do so today. She also says “I was lucky to be in the right place at the right time.”

In addition to her status as an astronaut, Shannon has worked in the Shuttle Avionics Integration Laboratory (SAIL), the Flight Software Laboratory, the Astronaut Office, CAPCOM at Johnson Space Center Mission Control Center, Chief of Mission Support and Chief of Astronaut Appearances as well as NASA’s Chief Scientist at their Headquarters in Washington.

In December of 1996, President Bill Clinton presented Shannon with the Congressional Space Medal of Honor for her outstanding work on the Space Station Mir – the first woman to receive such an honor. She retired from NASA in January 2012.

Three letters can be used to sum up Jerry Ross: EVA. Selected by NASA in 1980, Jerry L. Ross (Colonel, USAF Ret.) has the distinction of being the first human launched into space seven times. He has logged over 1,393 hours in space including 58 hours and 18 minutes during a total of nine spacewalks (EVAs). His record-setting seven space flight record is now shared with only one other astronaut – Franklin Chang-Diaz. The numbers of spacewalks, as well as the duration of the spacewalks are both the second-highest among U.S. astronauts and third-highest among astronauts worldwide. A young visitor to the Kennedy Space Center Visitor Complex stares down on the ceremony proceedings from a crawl tube playset designed to look like the International Space Station. Photo Credit: Jason Rhian / SpaceFlight Insider

He left our planet for the second time also aboard the Space Shuttle Atlantis for STS-27. As a Mission Specialist for this Department of Defense (DOD) mission, he helped deploy and activate an important national satellite system.

On April 5, 1991, Ross jumped on Atlantis for his third mission, STS-37, aiming to deploy the Compton Gamma Ray Observatory. This mission had not allowed for any scheduled EVAs, much to Jerry’s disappointment. However, an antenna malfunction had Jerry outside the shuttle again where he not only deployed the antenna but also did further evaluations on potential space station equipment. This marked the first year that the induction ceremony was held at the Atlantis Exhibit at the Kennedy Space Center Visitor Complex. Photo Credit: Carleton Bailie / SpaceFlight Insider

Next was STS-55, a German-sponsored Spacelab D-2 mission, launching on April 26, 1993 on the Space Shuttle Columbia. For this mission, Jerry was the Payload Commander, leading the team in conducting close to 90 experiments exploring life sciences, material sciences, physics, robotics, astronomy, and the Earth.

The second Space Shuttle mission to dock with Mir was STS-74, launched on November 12, 1995. Ross and the rest of the crew aboard the Space Shuttle Atlantis installed a permanent docking module for future shuttle visits. Ross was the launched aboard the Space Shuttle Endeavour on December 4, 1998 for twelve days in which the crew tethered the U.S. Unity module to the unmanned Russian Zarya module. During this mission, Ross completed three EVAs, connecting equipment to the exteriors of the two modules.

Ross flew his seventh and final mission, STS-110, on Atlantis. Launched on April 8, 2002, this mission was the first in the final stage of ISS construction. There were a total of four EVAs during this mission, and Ross completed two of them. He installed the S-Zero element, which is the extremely important center section of the truss.

When Jerry found out he was going to be inducted, he told selection committee chairman Bob Sieck, “I always liked you and respected you, but now I really really like you.” Jerry also joked saying “man, I must be getting old.” He then went on to describe how he felt about the Atlantis exhibit: “Kennedy Space Center has done a marvelous job putting this tremendous shuttle on display.”

During his career, Ross received 15 NASA medals as well as the American Astronautical Society’s Victor A. Prather Award for his many spacewalking achievements. He recently earned the title of author as he released his autobiography “Spacewalker: My Journey in Space and Faith as NASA’s Record-Setting Frequent Flyer.”

Prior to being inducted, Jerry Ross spoke with the Space Flight Group and you can read what he had to say here.

Both inductees, Shannon Lucid and Jerry Ross, are huge STEM supporters. They encourage young people today to set goals based on their talents and not to give up on their dreams. On Friday, May 2, 2014 Jerry Ross along with fellow Hall of Famer Hoot Gibson gave a group of students (grades 2-5) from Westside Elementary, Cedartown, Georgia a special guided tour of the Atlantis exhibit.

When asked about the experience, here is what fifth-grader Ayron Miller had to say: “space and science always interested me and this is an experience that makes me want to learn more about it, it’s just awesome.”

School teacher Kim West said, “It brings education to life. They can read about astronauts and space and they can do things in the classroom. Now they can say they’ve met an astronaut and seen the space shuttle up close. It brings history to life.”