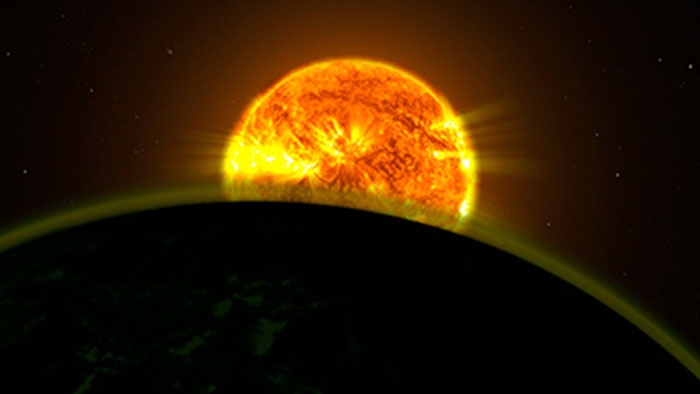 Two research teams using NASA’s Hubble Space Telescope have discovered faint traces of water in the atmospheres of five planets orbiting nearby stars. While the presence of water has been previously detected on a few  exoplanets, this is the first time that a study has compared the profiles and intensities of these signatures on multiple planets.

The five planets studied were: WASP-17b, HD209458b, WASP-12b, WASP-19b and XO-1b. While all five showed signs of water, the signatures were strongest for  WASP-17b, a planet with an especially puffed-up atmosphere, and HD209458b. The study of WASP-12b, WASP-17b and WASP-19b was led by Avi Mandell, a planetary scientist at NASA’s Goddard Space Flight Center in Greenbelt, Md.

“We’re very confident that we see a water signature for multiple planets,” Mandell said. “This work really opens the door for comparing how much water is present in atmospheres on different kinds of exoplanets, for example hotter versus cooler ones.”

The research team which studied HD209458b and XO-1b was led by L. Drake Deming of the University of Maryland in College Park. “To actually detect the atmosphere of an exoplanet is extraordinarily difficult. But we were able to pull out a very clear signal, and it is water,” said Deming. To determine what’s in the atmosphere of an exoplanet, astronomers watch the planet pass in front of its host star and look at which wavelengths of light are transmitted and which are partially absorbed.
Image Credit:
NASA Goddard

Both teams used Hubble’s Wide Field Camera 3 to study the absorption of light through the planets’ atmospheres. These observations can only be made only if the planets are spotted while they are passing in front of their stars. The observations were made in infrared wavelengths where water would be detected if present. The two teams compared the shapes and intensities of the absorption profiles. The consistency of their readings gave them confidence that they had detected water. Deming’s team used a new technique with longer exposures which increased the sensitivity of their readings.

All five planets are what astronomers call “hot Jupiters”, gigantic gas planets with high surface temperatures that orbit their star extremely closely.  The water signatures on all of the planets were weaker than expected, possibly due to a layer of dust or haze around each of the planets. This haze can mute the intensity of water signals and alter their profile in distinctive ways. Other researchers have also found evidence of haze around exoplanets. It is possible that cloudy or hazy atmospheres may be quite common on hot Jupiters.

The Hubble Space Telescope has proven itself to be a valuable asset for studying the atmospheres of exoplanets. Hubble’s Wide Field Camera 3, which was installed during the telescope’s last servicing mission in 2009, is one of the few instruments capable of peering into the atmospheres of planets which are trillions of miles away from Earth.