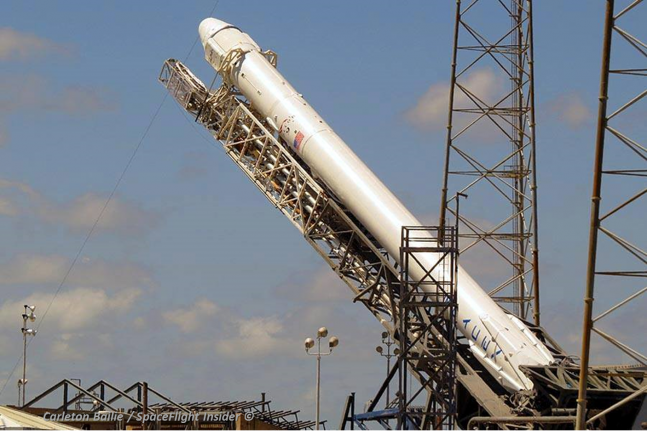 The planned 4:58 p.m. EDT (2058 GMT) launch of a SpaceX Falcon 9 v1.1 with a Dragon spacecraft bound for the ISS - has been scrubbed due to a helium leak in the first rocket's first stage. Photo Credit: Carleton Bailie / SpaceFlight Insider

CAPE CANAVERAL, Fla — Space Exploration Technologies hopes that they could conduct the third flight under the $1.6 billion Commercial Resupply Services (CRS) contract that the company has with NASA were dashed by a helium leak in the Falcon 9 v1.1’s first stage. The technical issue forced a scrubbed to be called just shy of two hours prior to the planned 4:58 p.m. EDT (2058 GMT) launch time.

The next launch opportunity would be Friday, April 18 at 3:25 p.m. EDT (1925 GMT) that is if the company can manage to correct the issues which cropped up in the final hours of today’s launch attempt.

Whenever it does finally launch (this particular mission has been delayed no fewer than eight times) it will ferry some 4,600 lbs of cargo and crew supplies. Included is the “space legs” for the Robonaut 2 android currently on the space station. Besides spare components as well as parts for space suits and material that will be used to repair the External Multiplexer-Demultiplexer (MDM) component which failed on the ISS this past week.

In the end however the MDM turned out to be a non-issue with NASA developing a work-around in fairly short order. If SpaceX can get the technical issues the next hurdle the Hawthorne, California-based company has to overcome is the temperamental Florida weather. Current predictions only provide a 40 percent chance of favorable conditions for launch.